Primark’s secret tycoon: He invented the fast fashion phenomenon but dined on ham sandwiches and travelled by coach. After his death at 83, a look back at the life of Arthur Ryan

Arthur Ryan was a man so determined to keep a low profile that even his everyday movements were a closely guarded secret.

Few of the staff in the vast retail clothing empire of Primark he founded would ever have recognised him — even without one of his frequent disguises.

And as his business mushroomed, from a single shop in Dublin in 1969 to the 72 stores in 12 countries with 75,000 employees it encompasses today, Arthur, the CEO until 2009, all but vanished from public life. 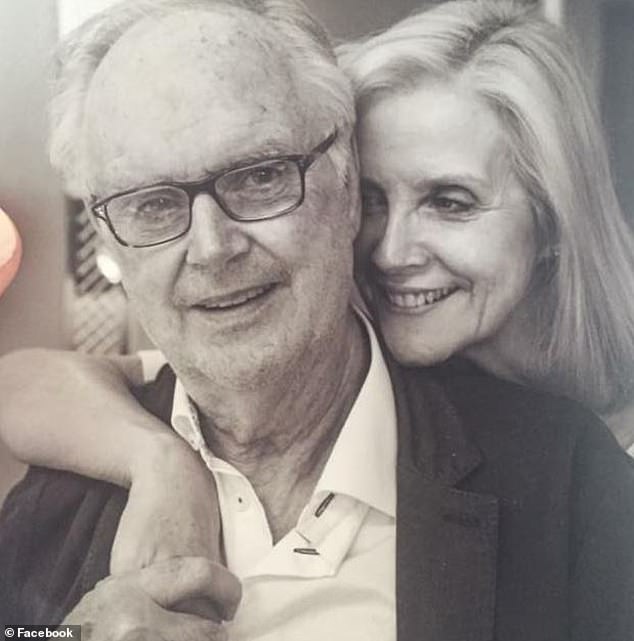 Dressed in his trademark modest suit and crumpled mac, he might stop by his local pub for an occasional pint, but most of his time was spent in the luxury home, bristling with security, that he shared with second wife and former Eurovision singer, Alma Carroll, in Dublin’s affluent Ballsbridge.

Whenever he did go out, he was shadowed by bodyguards. He refused to be photographed and last gave an interview in 1970. In fact, in a career spanning more than 60 years, Arthur, who has died aged 83, appeared in just one promotional video. The first time he spoke in public was at a ceremony in 2010, when he was honoured with a lifetime achievement award.

There was a good reason for his reclusive behaviour and reticence. Both stemmed from his morbid fear of kidnapping which dated back nearly 30 years to the abduction by the IRA of Irish department store boss Ben Dunne, in 1981, and the 1983 failed kidnap of Canadian food tycoon, Galen Weston, then resident in Ireland. 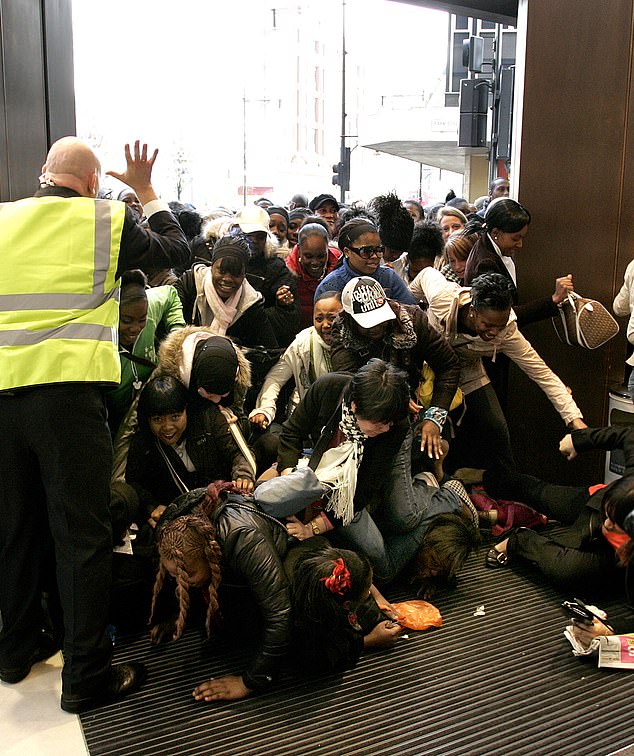 Shoppers crushed while trying to get into a new Primark store on Oxford Street, London

So, it was bitterly ironic that the tragedy that struck his family four years ago, killing his son, Barry Senior, grandson Barry Junior, 20, and his grandson’s girlfriend, Niamh O’Connor, was a random accident that no level of security — or indeed money — could have prevented.

It was a June evening in 2015 and the family were fishing off the Baltimore rocks in West Cork when a freak wave swept Niamh out to sea. Barry Jr dived in to save her but quickly found himself in trouble. His father went to help.

All three drowned as Arthur’s 14-year-old granddaughter, Charlotte, ran up the cliff path to get help, screaming hysterically: ‘My family have drowned. I know they have. My father, my brother and his girlfriend. I know they are dead. I saw their heads go down.’

The tragedy left Arthur heartbroken but he worked on with the energy of a man decades younger — visiting stores incognito and travelling so widely that fellow store tycoon Philip Green described him as ‘a man who has wheels on his feet, he travels more miles than any retailer I’ve ever known’. 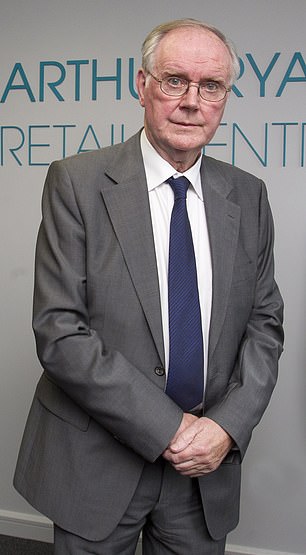 Arthur St John Ryan was born in the well-heeled Dublin suburb of Clontarf on July 19, 1935

Until recently, Arthur was still hard bargaining with suppliers to reduce costs. He was instrumental in Primark’s launch in America in 2015 and the opening of the firm’s biggest ever shop — spanning five floors and including a beauty studio, barber and three restaurants — in Birmingham earlier this year.

The son of an insurance clerk, Arthur St John Ryan was born in the well-heeled Dublin suburb of Clontarf on July 19, 1935.

Friends claimed that, as a teenager, he ran away to sea, but his nautical days were short-lived for soon he was in London, working first as a tie buyer for Swan & Edgar, and later for fashion wholesaler Carr & McDonald, before returning to work for Dunnes stores in Dublin.

It was from there that, aged 27, he was poached by Garfield Weston, CEO of Associated British Foods, and asked to set up a cut-price clothing chain. They thrashed out a deal giving him a £42 a week — the amount he told Garfield he needed to feed his wife, Rose, and their family — and never had a contract. ‘I had their word, I gave my word,’ he later said.

And with that, and Arthur’s ‘pile them high and sell them cheap’ strategy that continues today, the first Penneys opened in 1969. It was an immediate success.

A second store in Belfast followed in 1971 and, three years later, he took the model to England, opened a store in Derby and renamed it Primark to avoid legal difficulties with the American department store, JCPenney.

With success came riches and Arthur bought a handsome Dublin home for himself, Rose and their children — Colin, Arthur, the late Barry and Alison. Not that he saw much of them. Colleagues remember him as a workaholic with an astonishing drive for business.

‘He knew what people wanted,’ said one. ‘He was a great man for identifying his market and getting not just a bargain but also the best from his staff.’

Arthur’s enduring mantra was: ‘Never buy what you like yourself and if it isn’t selling, get rid of it quick,’ — and it worked.

One employee who worked in Dublin in the Nineties remembers a stickler for detail. ‘He really counted the pennies and would strike the fear of God into the buying office’, she said.

But he could be just as exacting in his personal life, regularly making the 100-plus-mile drive from Dublin to Belfast to buy a particular shirt at a slightly cheaper price.

However, those who properly knew Arthur, adored him. They found him funny, kind, generous, said he was a wonderful mimic and could be the life and soul of any evening, but was neither extravagant nor flashy.

So his regular Friday night fixture was a couple of pints with his closest colleagues before disappearing into the night.

‘He was always a subtle operator,’ said one. ‘You’d be in the Shelbourne [Hotel] bar, a drink would appear in front of you paid for by Arthur, but he’d be gone by the time you looked around.’

Sadly, his marriage to Rose floundered and the couple parted. Later, Arthur became close to Alma Carroll, a leading Dublin socialite in her day, and a cabaret singer who had represented Ireland in the 1977 Eurovision Song Contest and come third. 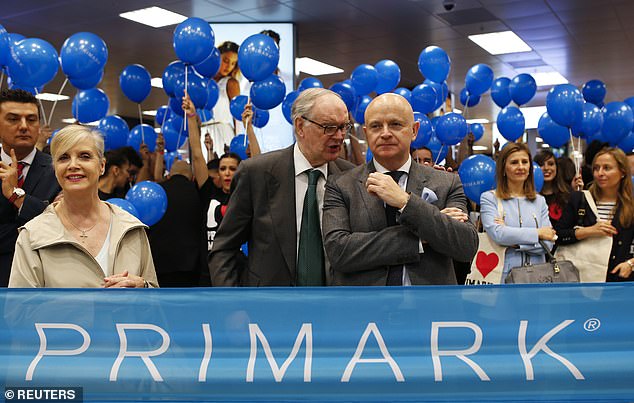 Alma had two children from a previous marriage to publisher Gerry McGuinness, whom she’d wed when she was 17. Together she and Arthur had a daughter, Jessie, now in her 20s.

As one of Dublin’s leading power couples, they were inundated with invitations, but lived quietly and relatively modestly.

For years Arthur drove the same old Jaguar, and they avoided glitzy parties or fancy restaurants.

‘I just like sliced ham and bread and butter,’ he once said.

When stranded in Malaga on a business trip during the Eyjafjallajokull volcano ash cloud of 2010, unlike John Cleese who famously took a £3,300 taxi ride from Oslo to Brussels, 74-year-old Arthur simply hopped on to a coach to Calais, 1,279 miles away.

Meanwhile, Primark was enjoying explosive growth and soon one of its stores was a staple on every High Street.

It was in 2005, when parent company ABF bought a huge number of former Littlewoods outlets, that the fashion chain became a major international player and expanded further into Europe, Scandinavia and Eastern Europe.

But it was also drawing plenty of criticism over staff pay, and the environmental and social impact of so-called ‘fast fashion’. In 2013, the company, along with Mango and Benetton, were criticised after the collapse of a factory in Bangladesh, which supplied the retailers, killing 1,134 people, who allegedly worked in appalling conditions.

Despite this, Primark — and the public’s taste for fast fashion — has continued to thrive in a tough environment for many of its rivals, with Arthur lauded by ABF’s George Weston as the ‘creator, driving force and inspiration behind the business’.

Just last week, Primark/Penneys celebrated its 50-year anniversary with a positive profits forecast — an epic achievement for any company on today’s High Street. And for one, very singular, man.

As he put it rather cryptically in that rare speech he gave when collecting his lifetime achievement award in 2010: ‘I’ve had an extraordinary career. It’s like Robinson Crusoe; I’ve got the opportunity to sail a ship and here we are in Park Lane.

‘We’re just here for water and supplies until we head off to Russia or somewhere.’