Prince Charles paid tribute yesterday to the ‘extraordinary bravery and fortitude’ of the Ukrainian people in the face of ‘such truly terrible aggression’.

On a visit to the Ukrainian Catholic Cathedral in central London with his wife Camilla, the future king accepted home-made posters from children, including one which read ‘Stop Putin’.

He told distraught members of its congregation that he could not believe what he was seeing ‘in this day and age’. And he even gave the rallying cry, ‘Slava Ukraine!’ (‘Glory to Ukraine!’), to which the assembled guests responded with a passionate, ‘Heroyam slava’ (‘Glory to the heroes!’).

For the prince – who was at the centre of a diplomatic row in 2014 when he likened Vladimir Putin to Hitler in his stance over Ukraine – it was the instinctive reaction of a man sickened by Russia’s naked imperialism and needless civilian bloodshed.

In talks with his staff over the weekend, Charles conveyed his desperate and heartfelt desire to do something practical to help.

Yesterday he was accompanied not just by Camilla but representatives from five charities of which he is patron, which he has brought together to help co-ordinate the relief efforts of UK-based Ukrainians.

The couple spent more than an hour comforting those in need, the Duchess of Cornwall frequently weeping as she spoke to members of the community who are desperately worried about family and friends back home. 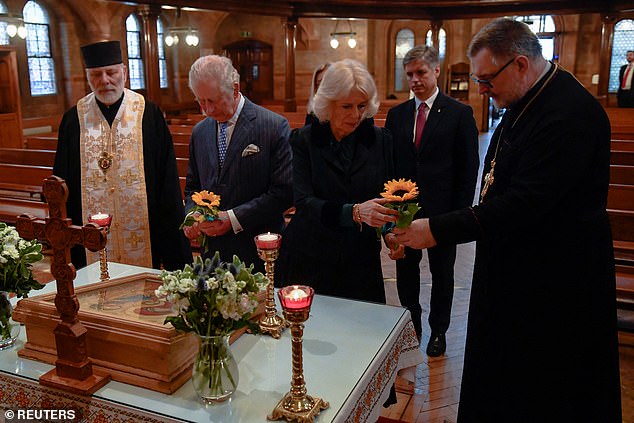 On several occasions she hugged the sobbing wife of the Ukrainian ambassador, telling her: ‘We are praying for you.’

A source said: ‘[Charles] has been deeply moved and just wanted to do something to help. He wanted to listen to people to find out what they need and how he can help facilitate that.’

The couple were met at the Cathedral of the Holy Family by bishop Kenneth Nowakowski, ambassador Vadym Prystaiko and his wife, Inna.

A member of the congregation greeted them saying, ‘vitayemo’ (‘welcome’), and offered them bread and salt, often given to dignitaries. Bread is a symbol of what gives us life and salt what sustains it.

In a back room, representatives of the Ukrainian community in the UK had gathered and Sunday school children sang a mournful traditional song, Chervona Kalyna (which is often translated as Red Guelder Rose), about their passion for the country and what it means to fight for Ukraine.

Camilla, biting her lip repeatedly, could not hide her tears.

Afterwards the royal couple moved around the room talking to as many people as possible. 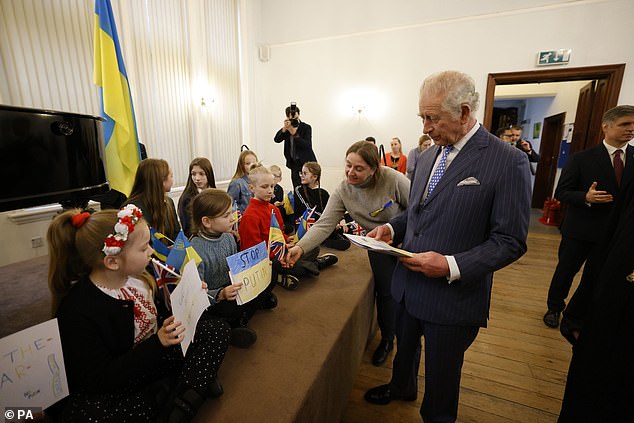 On a visit to the Ukrainian Catholic Cathedral in central London with his wife Camilla, the future king accepted home-made posters from children, including one which read ‘Stop Putin’

Sunday school teacher Lesya Klovak spoke to the prince at length and said he openly expressed his horror at the Russian invasion.

She said: ‘He asked about the song and what it means. He described the war as horrible and said he couldn’t believe that it was happening in this period, in this day and age. He also asked about my family and I told him that my father is 72 and delivers food for people. He and my mother refuse to run away. He says he will deliver for as long as he can. My mother runs a restaurant and she has given it to families who have lost their homes.’

She added: ‘He [Charles] said no one can understand what is going on. He was expressing his sympathy. He said he couldn’t believe it. He said he is with us, supporting us and we are together.’ 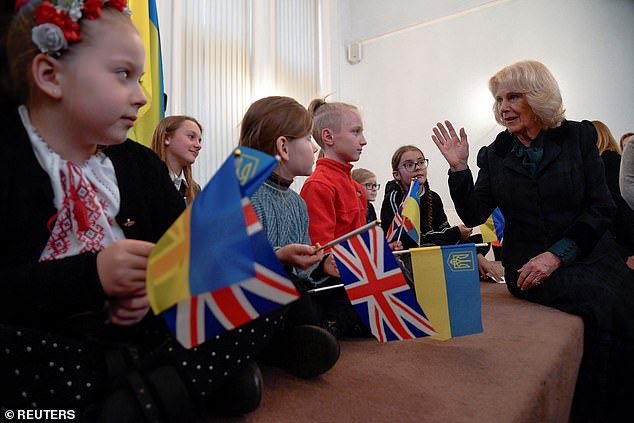 The couple spent more than an hour comforting those in need, the Duchess of Cornwall frequently weeping as she spoke to members of the community who are desperately worried about family and friends back home

The Daily Mail and Mail on Sunday UKRAINE REFUGEE APPEAL

Readers of Mail Newspapers have always shown immense generosity at times of crisis.

Calling upon that human spirit, we are now launching an appeal to raise money for refugees from Ukraine.

For, surely, no one can fail to be moved by the heartbreaking images and stories of families – mostly women, children, the infirm and elderly – fleeing from Russia’s invading armed forces.

As this tally of misery increases over the coming days and months, these innocent victims of a tyrant will require accommodation, schools and medical support.

All donations to the Mail Ukraine Appeal will be distributed to charities and aid organisations providing such essential services.

In the name of charity and compassion, we urge all our readers to give swiftly and generously.

TO MAKE A DONATION ONLINE

Via bank transfer, please use these details:

TO MAKE A DONATION VIA CHEQUE

TO MAKE A DONATION FROM THE US

US readers can donate to the appeal via a bank transfer to Associated Newspapers or by sending checks to dailymail.com HQ at 51 Astor Place (9th floor), New York, NY 10003

Vira Vitiv, who spoke to the duchess, said: ‘She expressed her shock and her sympathy. She feels the same level of helplessness that many do and just wanted to listen to us about what she could do to help. That listening was so important. It meant a great deal.’

Charles also spoke to children from the cathedral’s Sunday school who were sat on a stage. Each child in the front row held a home-made poster bearing the Ukrainian flag and messages such as ‘Save Ukraine’, ‘No War Needed’, ‘Putin Go Away’, ‘Stop Putin’ and ‘Stop The War’. He either accepted them personally or was given them – in the case of the ‘Stop Putin poster’ – by their teacher. They were then given to aides.

Camilla stopped several times to speak to the wife of the Ukrainian ambassador, who could not hide her emotion. On each occasion she hugged her and rubbed her arms.

The room was packed with leaders from the Ukrainian community, faith leaders and volunteers helping with the humanitarian effort. In an off-the-cuff speech, Charles told them: ‘Thank you so much for welcoming us to this very special cathedral.

‘I must say my wife and I have been deeply moved by everything we have heard today during our visit and above all by the extraordinary bravery, generosity and fortitude of the Ukrainian community in the face of such truly terrible aggression.

‘So if I may say so, our thoughts and prayers, however inadequate they may be, are with all of you at this most critical time.’

The five charities that Charles has brought together and connected with the community are World Jewish Relief, the British Red Cross, International Health Partners, In Kind Direct and the International Rescue Committee.

Before they left the couple went to the altar where they lit candles and laid two sunflowers – the national flower of Ukraine.

The cathedral has become a rallying point for the British Ukrainian community in recent days.

Cathedral staff reported Ukrainian men have been seeking blessings before travelling back to their homeland to join the fight against Putin’s army.

Ukrainian ambassador Mr Prystaiko said he was ‘touched’ by the duchess hugging his wife and said he would convey the message this symbolised back to his homeland.

Asked about Charles’s comments, he disagreed with the suggestion they were ‘political’.

He said: ‘It’s not political any more, we’re past political, we’re in survival mode. We’re now, as the prince mentioned, we’re trying to find a way [to see] how a nation of 40 million people can survive the aggressor.’