Prince Philip funeral: Britons pay their respects to the Duke

A nation watches: Britons pay their respects to Prince Philip from home, the pub and even at sea after mourners were asked to stay away from funeral due to Covid rules

Thousands of Britons have paid their own personal tributes to Prince Philip from their homes, gardens and pubs this afternoon after mourners were told to stay away from the funeral in Windsor amid coronavirus restrictions.

Royal events, particularly funerals, usually attract large crowds of well-wishers and fans, yet social distancing measures prompted the Royal Family, the Government and police to ask the public to watch from home.

And Britons took to social media to share photos of their English breakfasts, bunting and glasses of bubbly as they gathered in front of TVs to say farewell to the Duke of Edinburgh, 99.

Friends also gathered in pubs, where they stood in solemn silence and raised a drink to the Duke, while football, rugby and F1 teams observed a minute of silence.

Pigeons from the Royal Pigeon Racing Association were also released at the National Memorial Arboretum in Alrewas, central England. The 10 birds represent each decade of the Duke’s life and will be released simultaneously across the UK.

Pupils and staff from Gordonstoun school also cast a wreath into the Moray Firth from the Ocean Spirit in a tribute to Prince Phillip, a former pupil.

Flags have been lowered to half-mast and many councils, police forces and other organisations will be holding a one minute’s silence with the rest of the UK at 3pm. 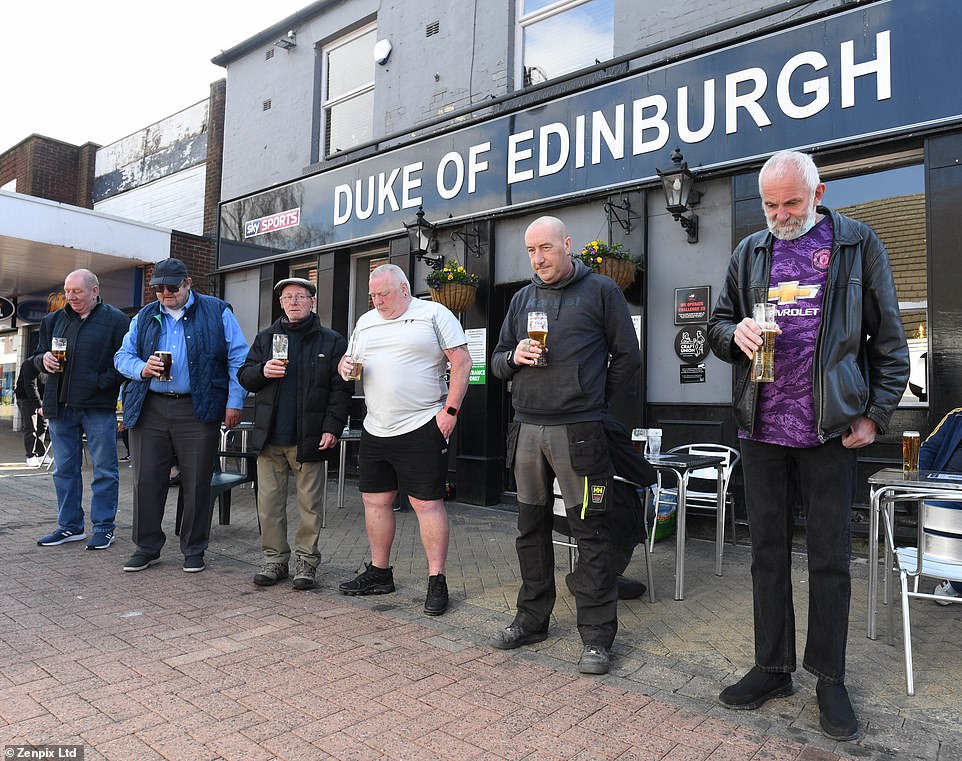 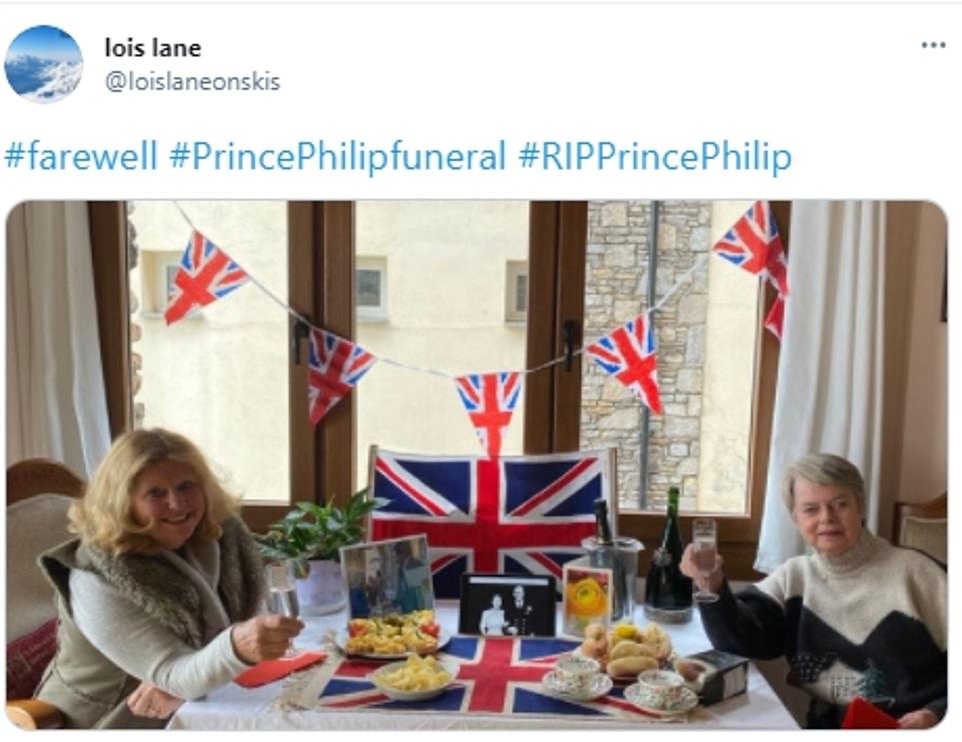 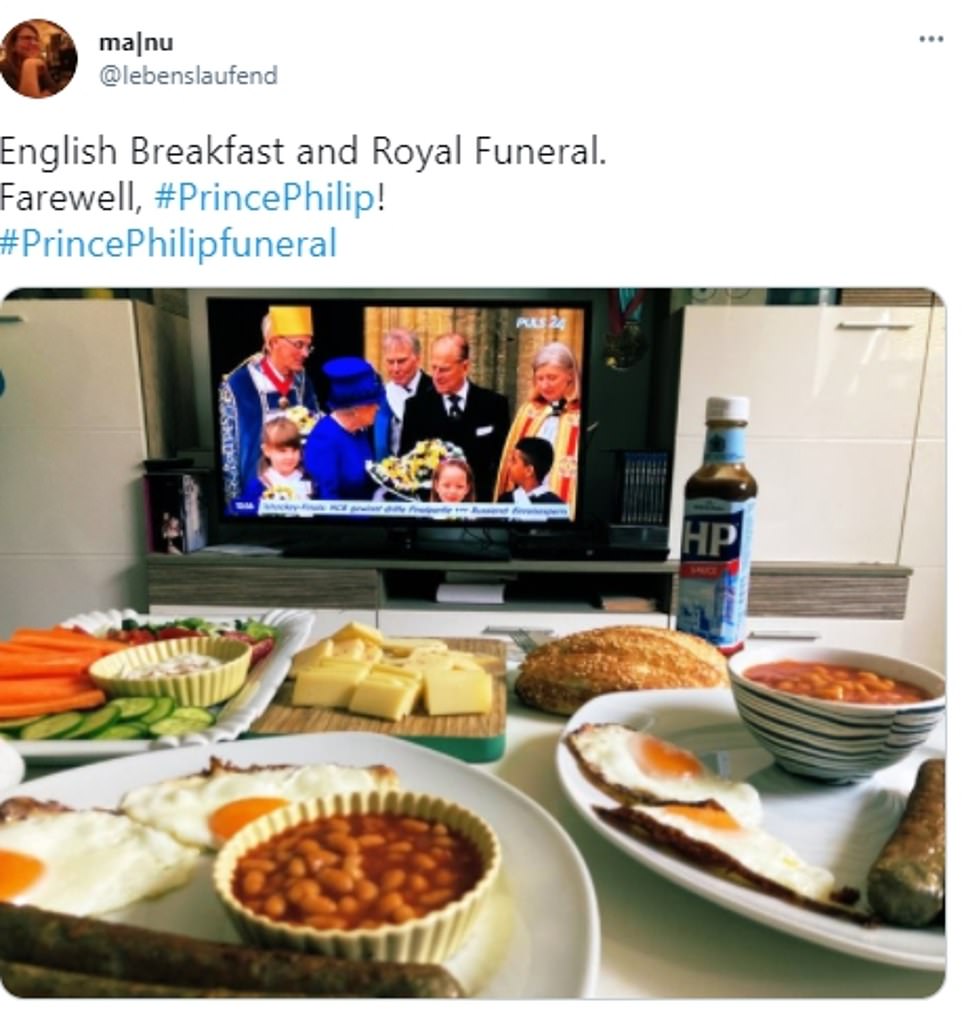 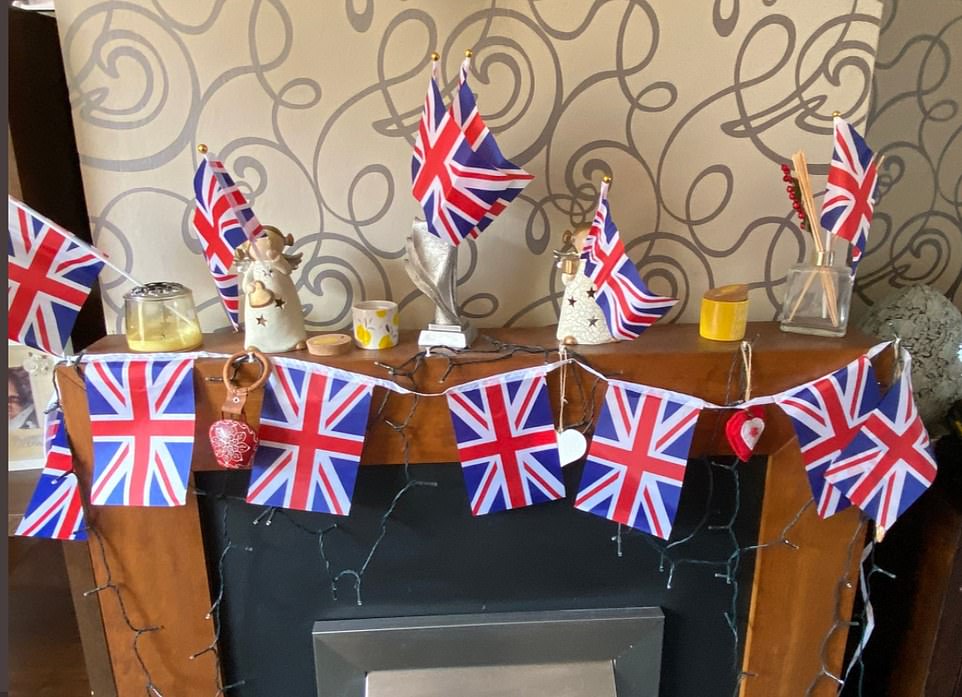 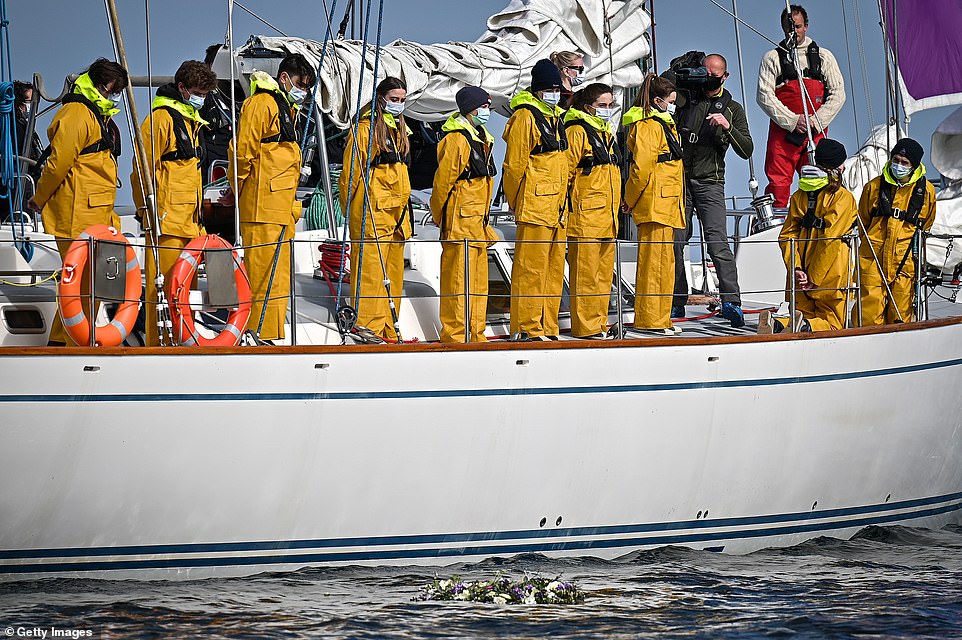 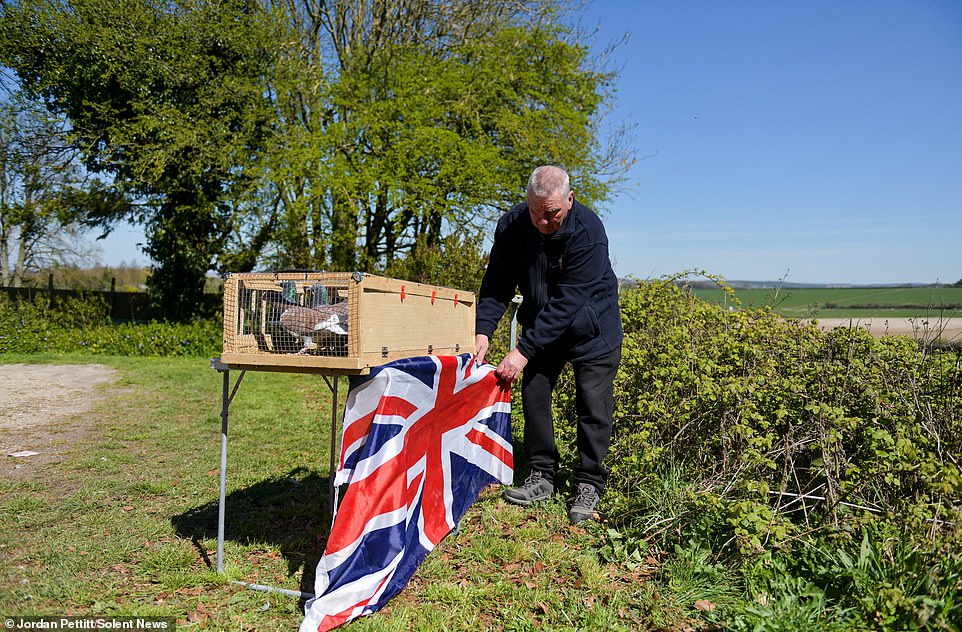 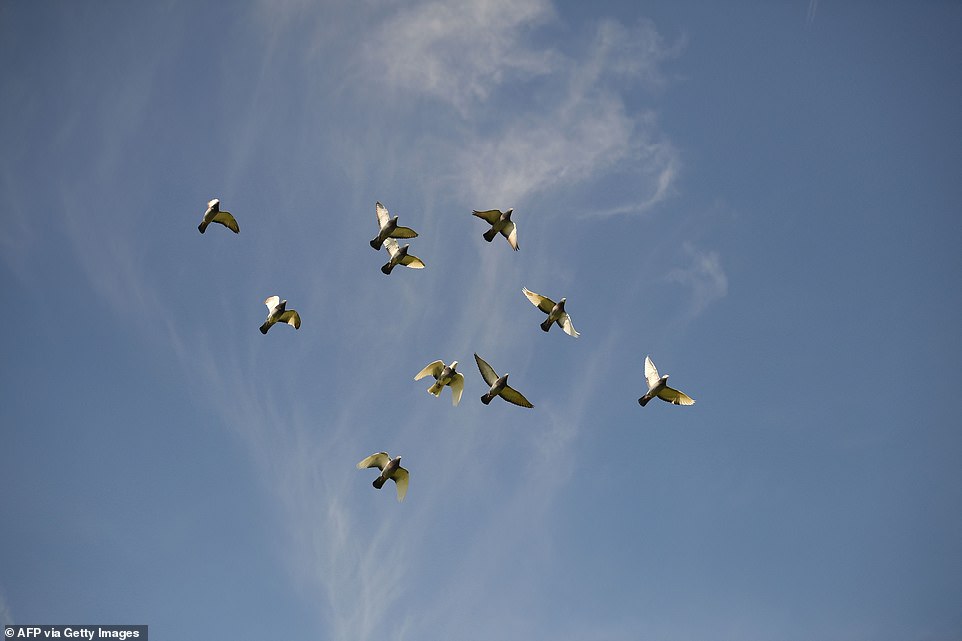 The 10 birds represent each decade of the Duke’s life and will be released simultaneously across the UK. The Royal Family began to keep pigeons in the late 19th century and the tradition has been maintained by the Queen 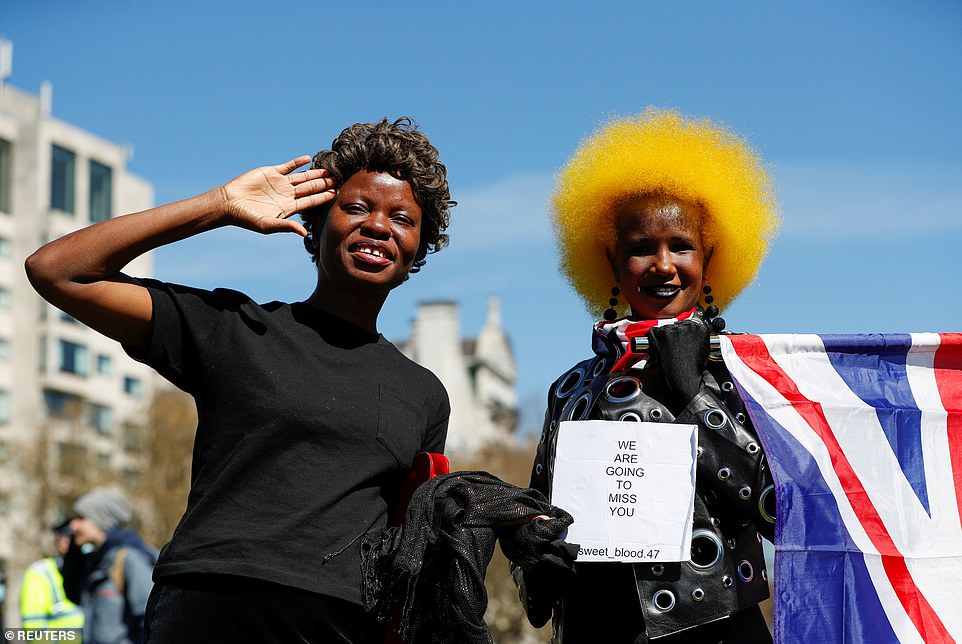 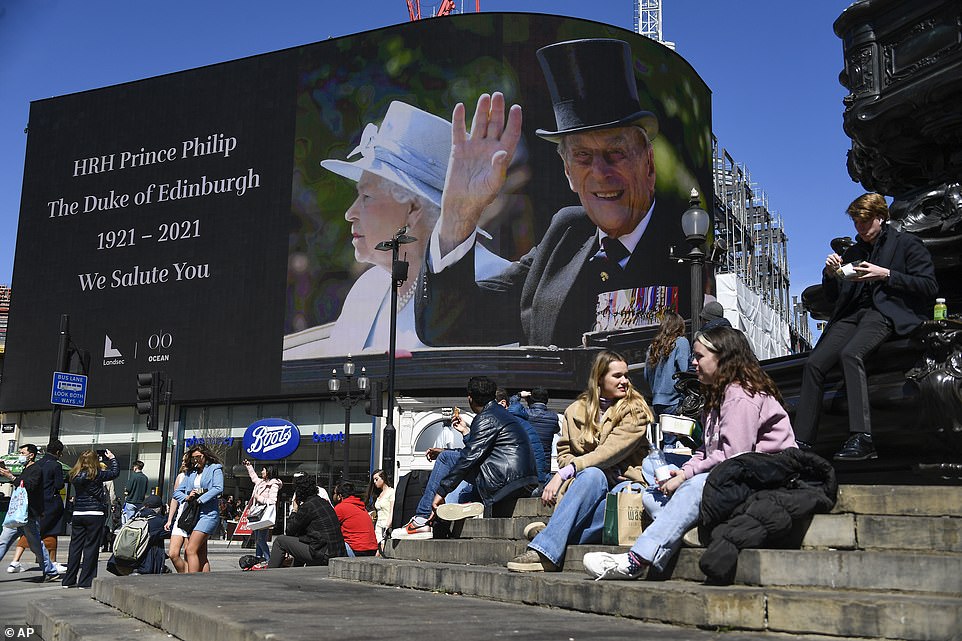 People sit near a screen displaying photos of the late Duke of Edinburgh, at Piccadilly Circus, in London this afternoon

Crowds have also started to gather outside Windsor Castle ahead of Prince Philip’s funeral despite Buckingham Palace’s plea for mourners to watch from home.

Police officers threw a ‘ring of steel’ around Buckingham Palace and Windsor Castle as a high-alert security operation was launched to control ‘thousands’ of expected well-wishers, according to one officer.

Drains and rivers surrounding the castle have been scoured for security threats and in London all roads around Buckingham Palace have been closed off.

Dozens of police – some armed – and security officers are on duty, patrols are being carried out in parks surrounding the Palace and a police helicopter hovers above.

Hundreds of socially-distanced mourners have flocked to Windsor this afternoon ahead of the duke’s funeral at St George’s Chapel at 3pm.

While this morning security, police and the media vastly outnumbered the public and empty trains from Waterloo and Paddington rolled into Windsor, people have now started to pour in.

The service, which will follow an eight-minute procession carried out by military regiments from the Royal Air Force, Army and Navy, will be attended by members of the duke’s close family.

On the Long Walk, where some of the pageantry will march before entering the castle gates, steel barriers have been placed to fence any spectators in. 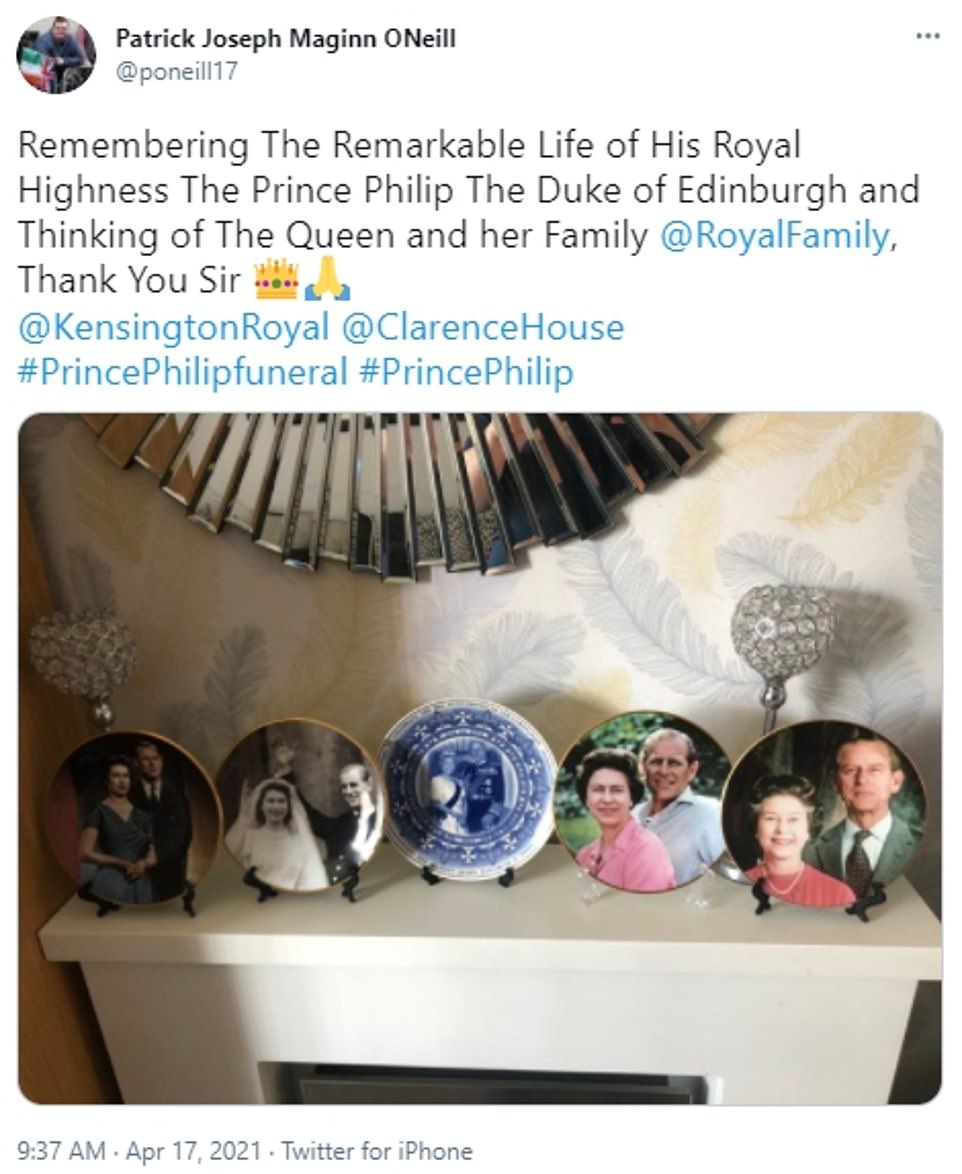 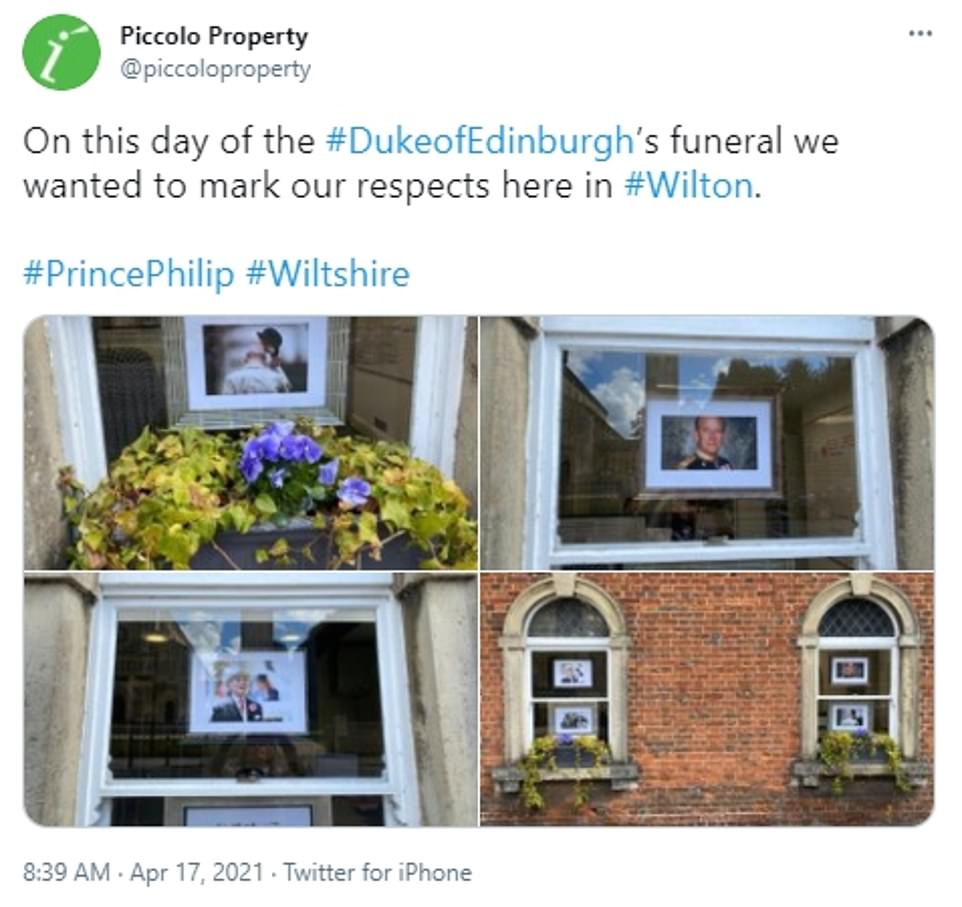 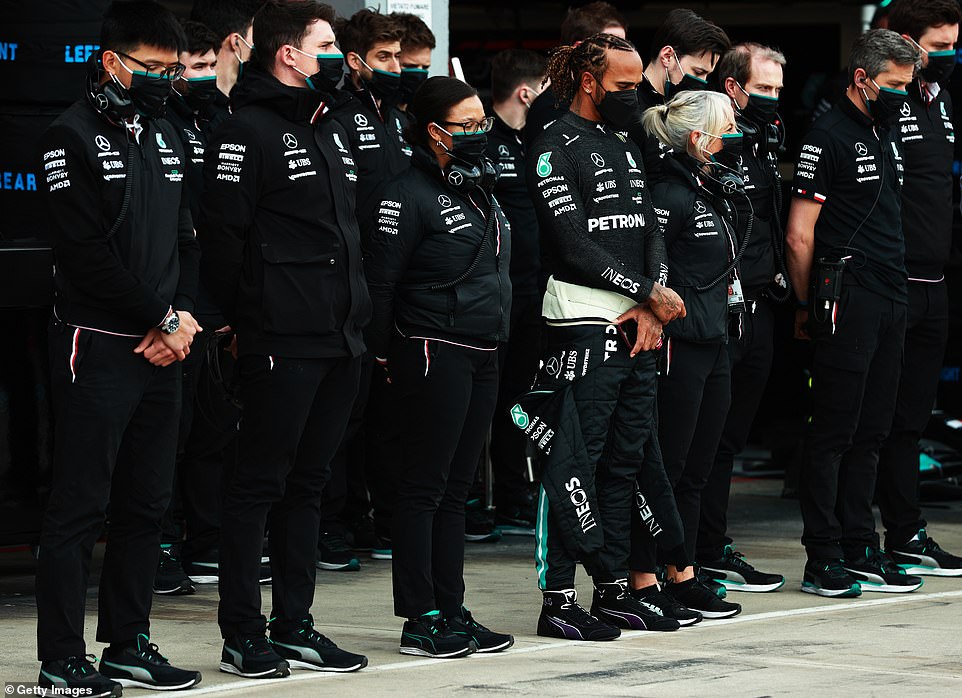 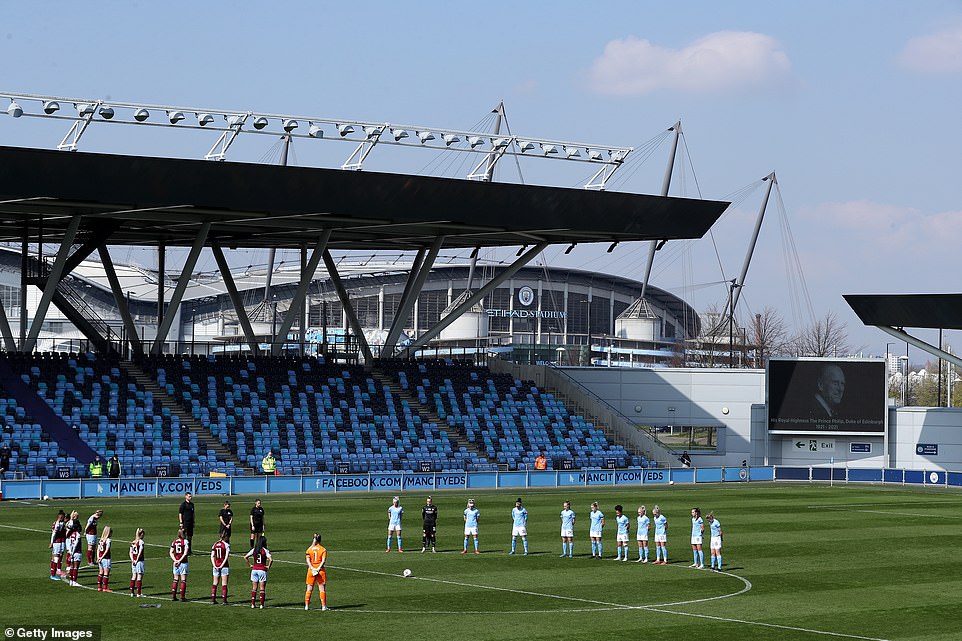 Players and Officials observe two minutes of silence prior to kick off in memory of Prince Philip, Duke of Edinburgh during the Vitality Women’s FA Cup Fourth Round match between Manchester City Women and Aston Villa Women 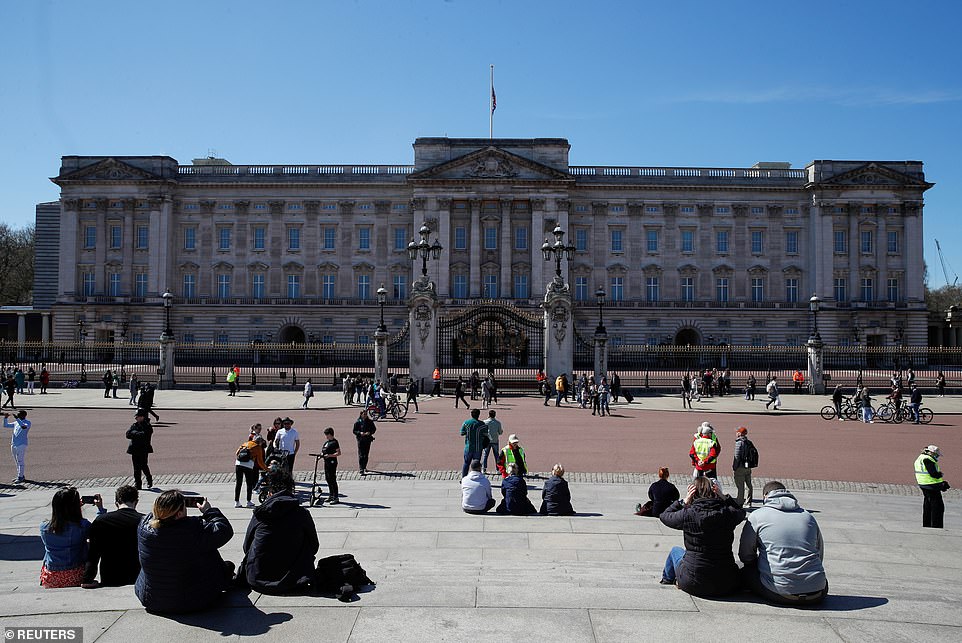 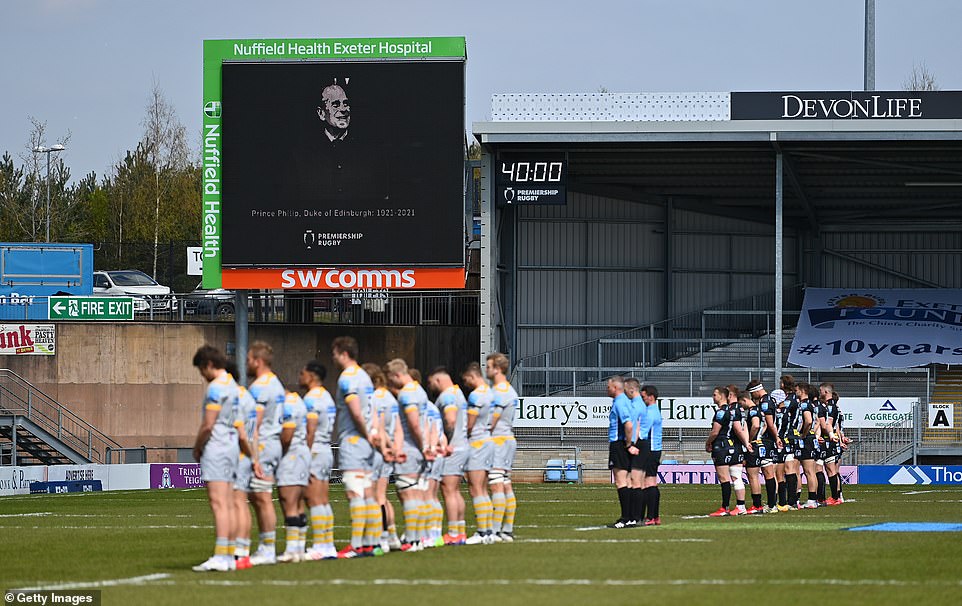 The teams observe a minutes silence in memory of the late Prince Philip, Duke of Edinburgh during the Gallagher Premiership Rugby match between Exeter Chiefs and Wasps 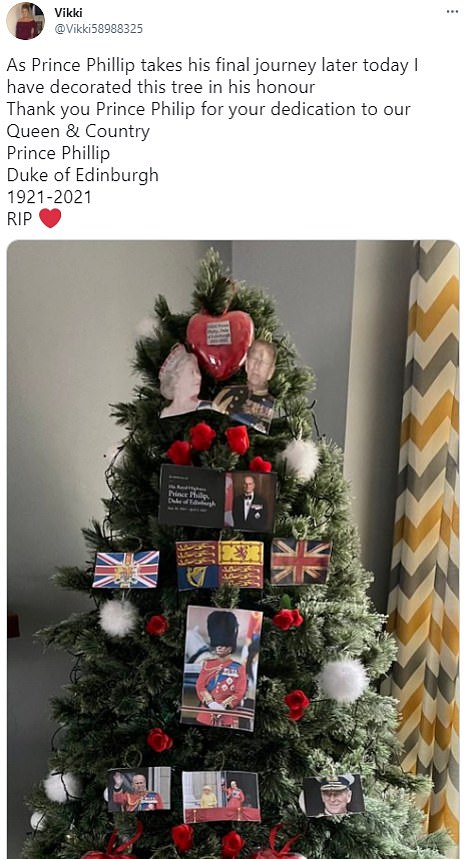 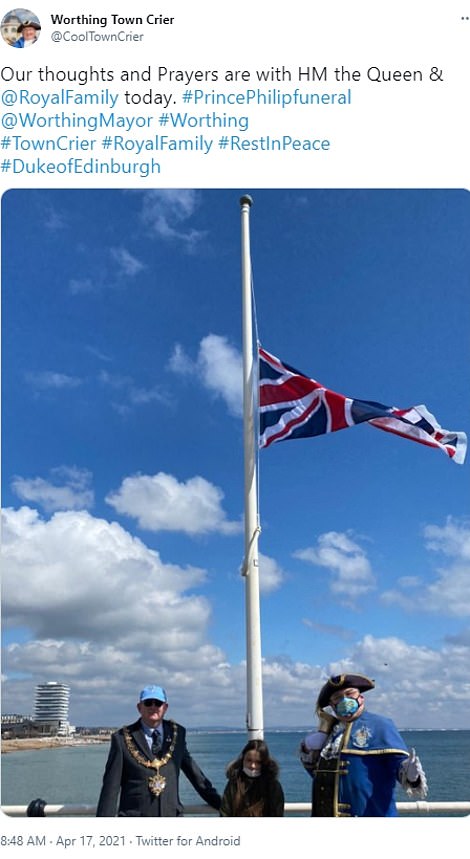 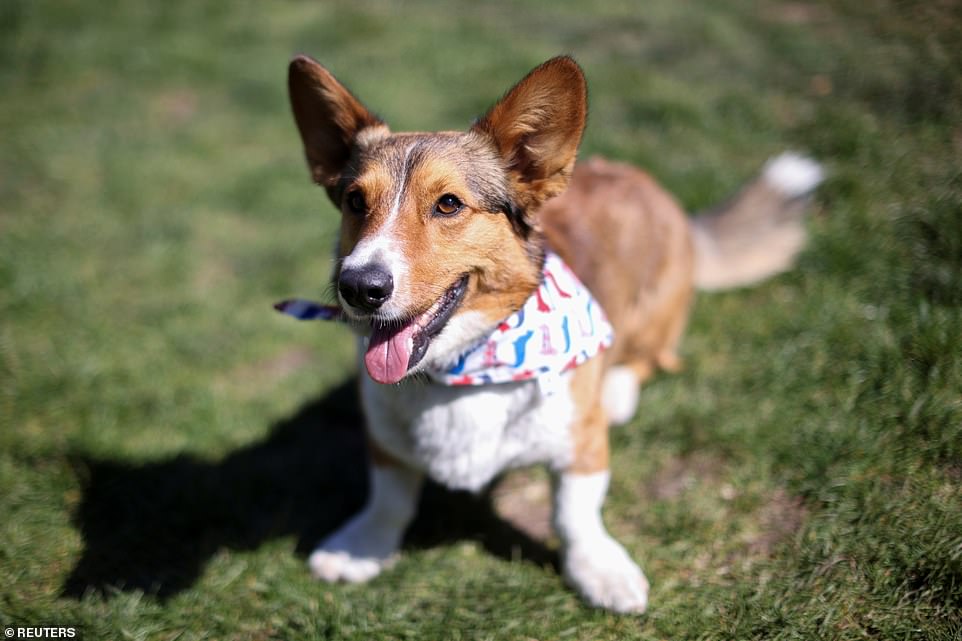 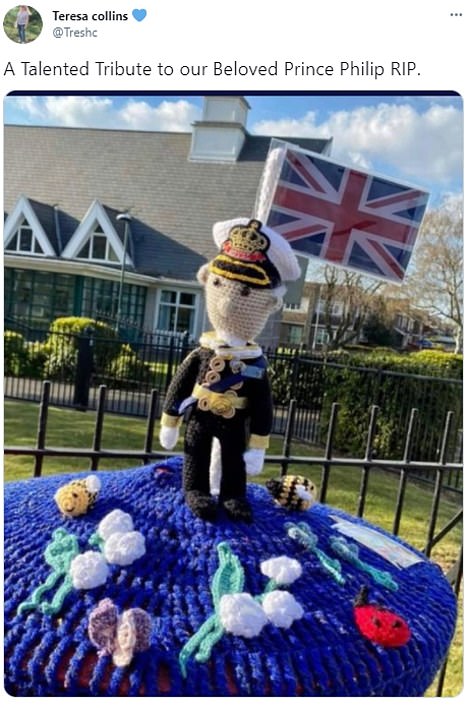 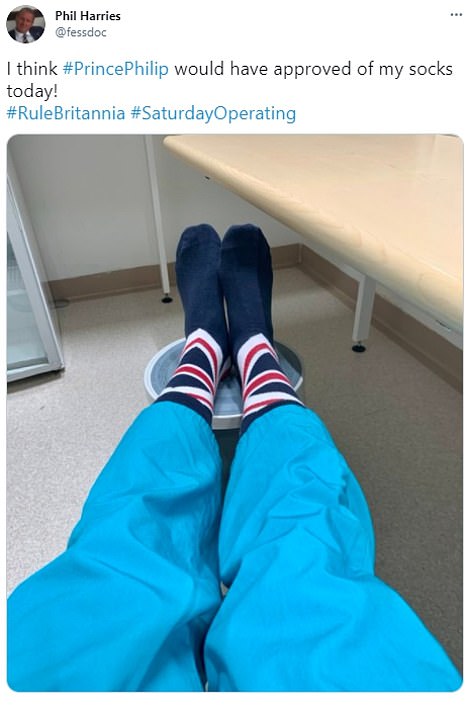 The early afternoon sunshine meant more people could be seen near to Windsor Castle ahead of the Duke of Edinburgh’s funeral.

A few members of the public walked around with flowers in their hands while others could be seen wearing custom face masks bearing Philip’s face.

However, the number of people is notably lower than the amount seen in previous royal events due to coronavirus restrictions.

Police officers on horseback have been seen walking through the town while there is an increased presence of ambulance staff.

Hundreds of people watched as the King’s Troop Royal Horse Artillery processed along the Long Walk up to Windsor Castle at midday.

Dozens of riders, wearing black, gold and red uniforms and carrying three guns, rode up to Cambridge Gate where tributes to the duke have been laid throughout the week.

Members of the public have expressed their sadness that original plans for the funeral of the Duke of Edinburgh could not proceed in Windsor.

Residents said the country was ‘missing out’ on fully commemorating Philip’s death but praised the royal family for ‘setting an example’ during the ongoing pandemic.

Despite the sunshine, few people had gathered in the town by 11am on Saturday morning ahead of the event, though a steady stream of tourists, shoppers and dog-walkers passed along the high street. 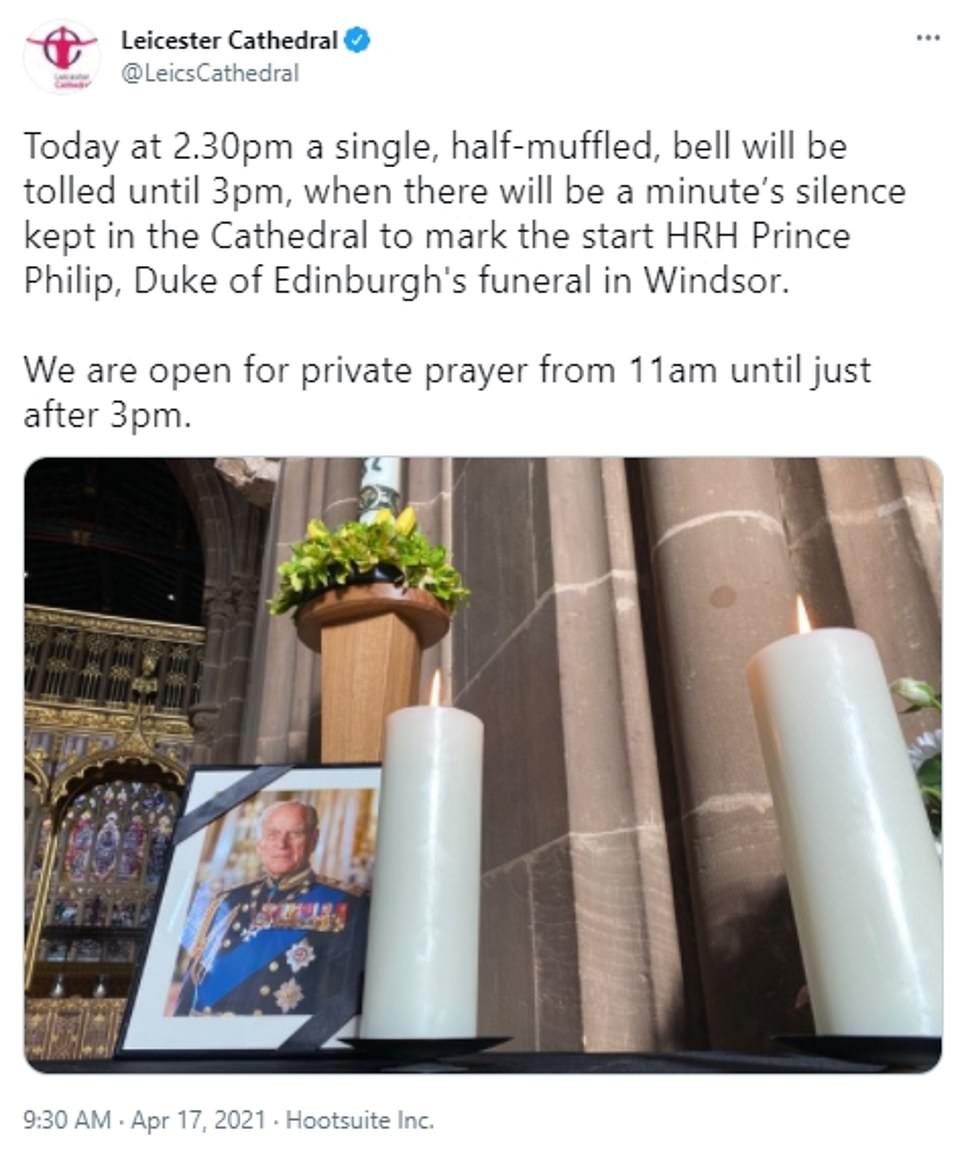 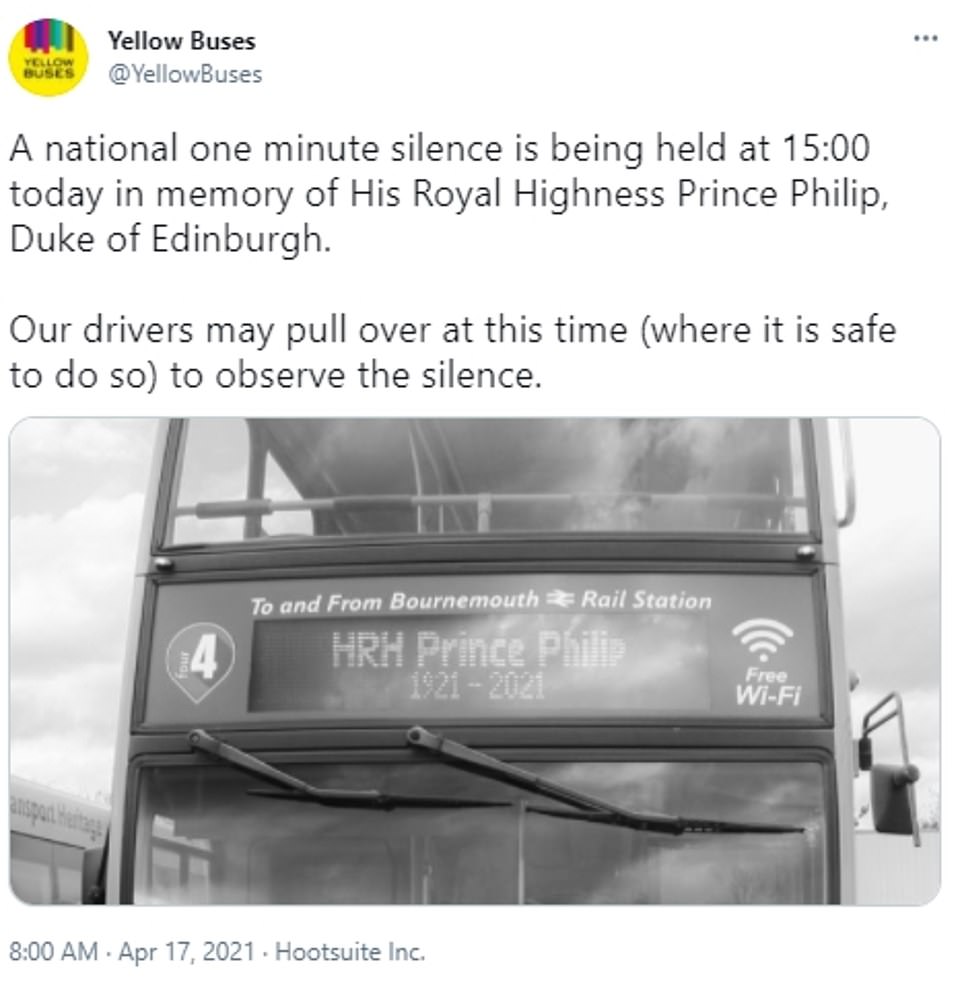 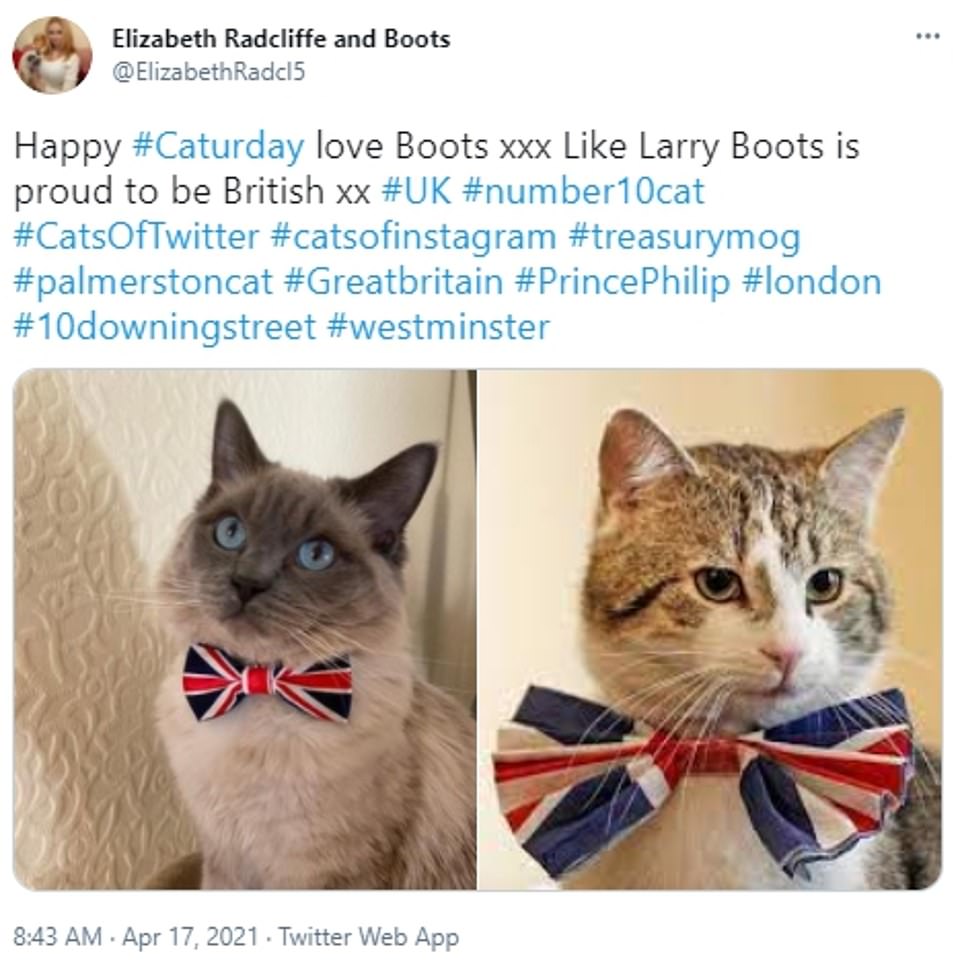 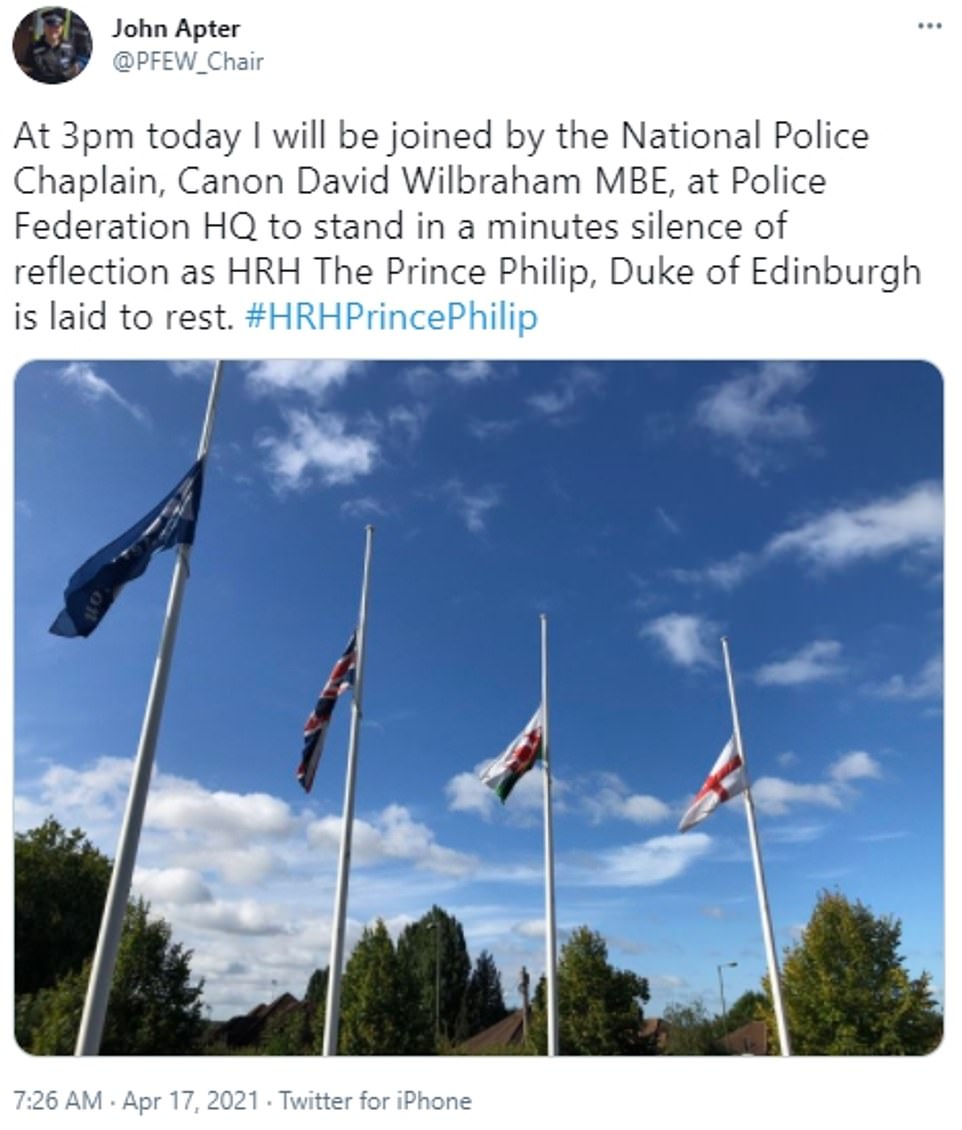 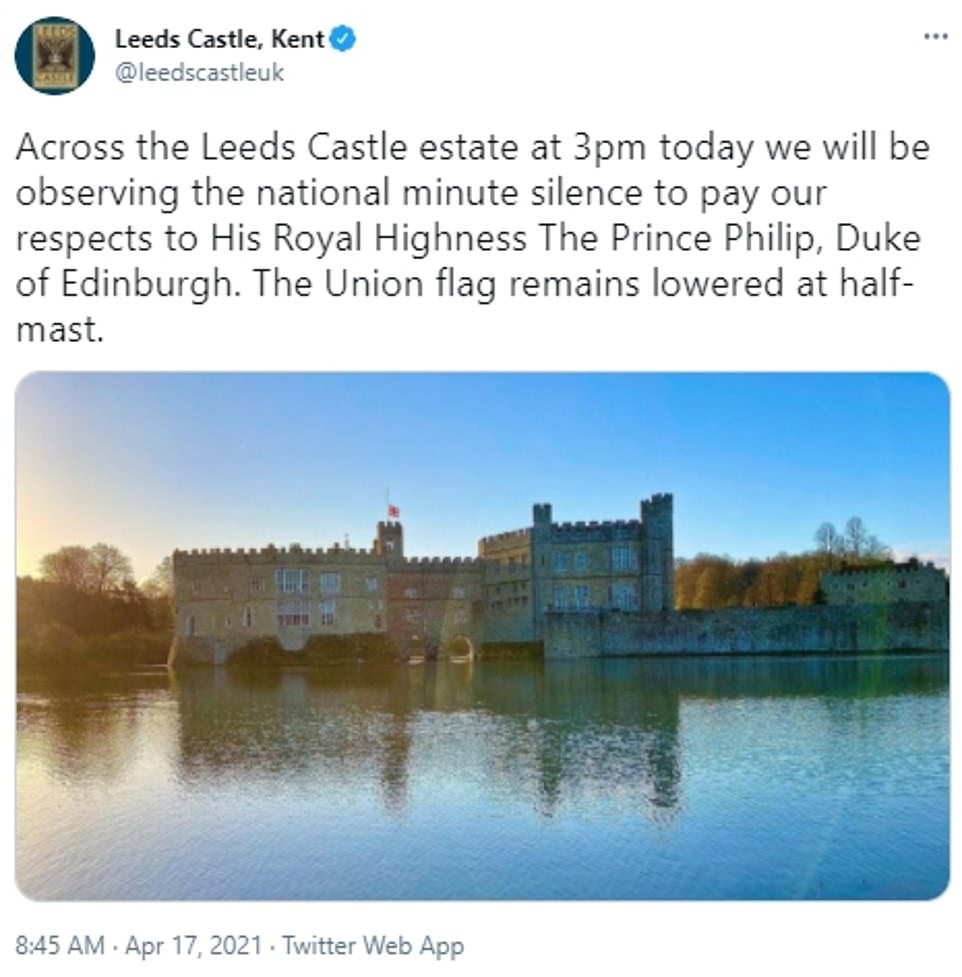 Dozens of armed police made preparations on the high street and swept areas along the Long Walk up to Cambridge Gate, and the walls of Windsor Castle.

Road signs in the area warned: ‘Avoid all non-essential travel and do not gather at royal residences’, though some visited briefly to lay tributes to the duke.

Jack Carson, 34, who left bunch of flowers said: ‘I’m going to watch the funeral service from home but I thought it would be nice to come down this morning to lay some flowers down.

‘Philip was a fantastic public servant and will be missed by the people in this town.’

Another resident, Ian Mawhinney, 56, said that it had been a ‘sombre few weeks’ in the town but that the royal family were ‘setting an example’ by limiting numbers at the event.

‘I think it’s really important to mark the event. It’s been a very sombre time for the town,’ he said. ‘Living in Windsor you realise how much they do for the community and the country. You sense the loss more here.

‘It’s been a very sombre few weeks. I’m quite torn about the measures… I think the country is missing out on something. I think the royal family are setting an example.

‘Having a small event is not what they would have wanted but they will adapt and…honour (Philip) in their own way.’

A royal supporter has spoken of his dismay that crowds cannot gather at Windsor Castle for the Duke of Edinburgh’s funeral.

Speaking outside the historic castle, Professor Chris Imafidon, from Essex, who says he met Philip on a few occasions, said: ‘I think it’s a disgrace, there should be more people here, especially when there are plans for people to return to football stadiums.

‘It’s such a mediocre service for a great man, his contribution to helping working-class people generally has been enormous.

‘He has done so much for this country, there should be a big public celebration of his life.

‘People have been asked not to come, so I think it will be a quiet atmosphere, I just feel so sad.’