HONG KONG (Reuters) – Hong Kong police clashed with thousands of protesters on Sunday, as they sought to defend China’s main representative office from crowds seething over what many see as an increasing cycle of violence against them.

Protests over the past two months spearheaded by anti-government activists against a proposed bill that would allow people to be extradited from the city to stand trial in courts in mainland China have grown increasingly violent.

A march on Saturday against an assault the previous weekend by suspected triad gang members ended in violent turmoil as riot police waded in to disperse crowds.

On Sunday, a peaceful gathering in a park in the city’s central business district rapidly morphed into a march, as tens of thousands of black-clad protesters set off in several directions, clogging up major thoroughfares.

Thousands of people headed east, toward the shopping district of Causeway Bay, while another large contingent headed west, toward the Chinese government’s representative office, known as the Central Government Liaison Office.

There, hundreds of riot police blocked activists from advancing toward the building, which had been heavily fortified with barricades after it was surrounded and defaced a week earlier. A clear plastic shield had been erected around a national emblem above its front doors.

As the crowds surged, hundreds of riot police with shields advanced, firing rounds of tear gas, rubber bullets and sponge grenades – a crowd-control weapon – at protesters, sending clouds of acrid, burning smoke through the streets.

Some protesters were on their knees choking as ambulances raced to take away the injured.

The mostly young activists in hard hats, gas masks and body armor dug in, dismantling street signs and fences which they used to form makeshift barricades to slow police advances.

Many hit metallic surfaces with sticks to create an ominous drum beat that echoed down the streets.

China’s Liaison Office, a potent symbol of Beijing’s rule over the city since Hong Kong returned from British to Chinese rule in 1997, has become a target for growing ranks of increasingly emboldened youngsters, angry at China’s tightening grip on the city’s freedoms.

Under a “one country, two systems” formula instituted as part of China’s sovereignty, the city was promised wide-ranging freedoms denied citizens in mainland China. “We call this Hong Kong’s age of revolution,” said a masked protester who called himself K Lee. “This movement has been sparked by China’s refusal to respect Hong Kong’s freedoms, and the failure of authorities to listen to the people’s voice.”

After multiple weekends of unrest, the protests have continued to draw large and apparently growing ranks of protesters in increasingly violent stand-offs.

Protesters responded to police with bricks, eggs and sling shots, as well as home-made gas canisters and paint balls.

Last Sunday, protesters took police by surprise with a swoop on the Liaison Office, scrawling graffiti and throwing paint bombs at walls, the national emblem and a plaque. Chinese officials described the vandalism as an attack on China’s sovereignty that would not be tolerated.

“I have no words for Xi Jinping, he is very arrogant in his belief in communism,” said a university student who called herself Miss Ho, referring to the Chinese president. “He is taking away our freedom, and that is something we cannot bear.”

China denies interfering in Hong Kong and has warned that the violent protests over the proposed legislation allowing extraditions to mainland China were an “undisguised challenge” to the formula under which it is ruled.

Many of the marchers on Sunday chanted slogans against the police. Some held banners reading: “We rise as one, we fight as one” and “Stop violence”.

The protests have brought the most serious political crisis to Hong Kong since it returned to China, and have posed an increasingly delicate national security headache for China’s Xi at a time of trade tensions with the United States and a slowing Chinese economy.

What began as a movement to oppose the extradition law has taken on broader demands. They include the resignation of Hong Kong’s Beijing-backed leader Carrie Lam, calls for full democracy and an independent inquiry into what some say has been excessive police force against protesters.

Lam has so far refused to accede to any of the demands.

The protesters appeared to be getting more organized and willing to use violence to achieve their aims. On Sunday, activists said they hoped to stretch the police by splitting their marches.

“The police usually surround us and we have nowhere to go. So we adjust our strategy this time. This is much more fluid and flexible,” protester Edward Ng said. 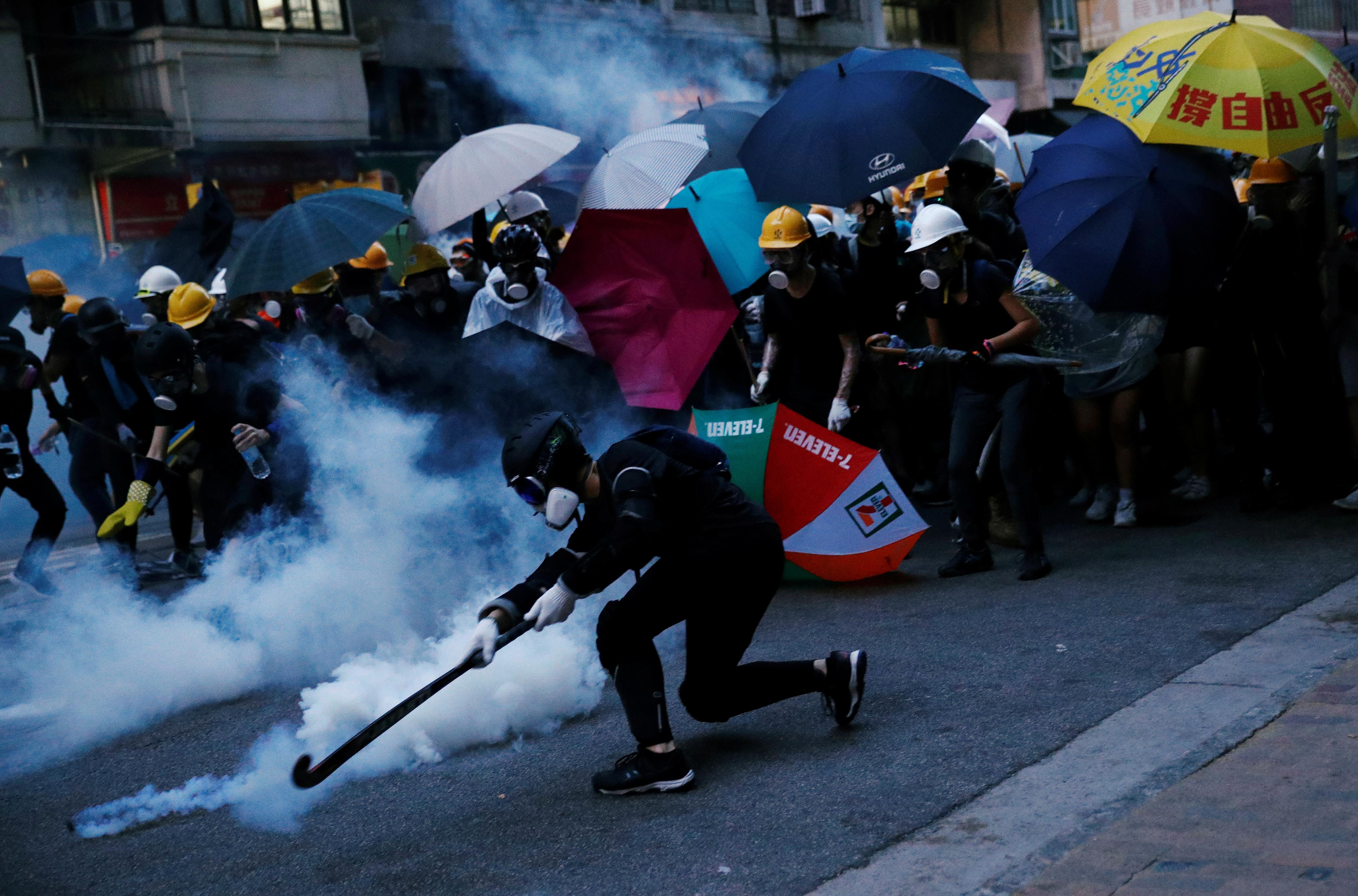 As riot police advanced at the end of the night from several fronts, the protesters, hemmed in and unable to see a way out, began streaming down into the Sheung Wan underground metro station.

The black-clad protesters clambered onto and filled a passenger train, chanting “Free Hong Kong. Age of Revolution”, in an orderly retreat. Many changed out of their black shirts, then changed trains, and vanished into the night.