Protesters slam police amid a riot of colour, music at Pride March

It wasn’t easy to stand out amid the riotous colour, movement and music of the 2021 Midsumma Pride March in St Kilda on Sunday. 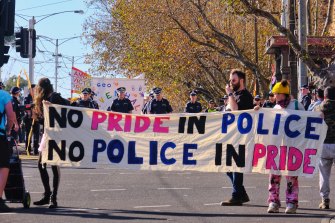 Protesters walked in front of police at the 2021 Pride March in St Kilda. The man with the walkie-talkie is a march marshal.Credit:Luis Ascui

There were roller skaters, bagpipe players, and people dressed as dinosaurs.

The protesters’ banner read: “No Pride in Police, No Police in Pride” and they used a megaphone, chanting: “Too many coppers, not enough justice”.

Their leaflets alleged that police in the past had failed to protect LGBTQI people against gendered and sexual violence, had failed to act on reports of hate crimes, and had been violent. 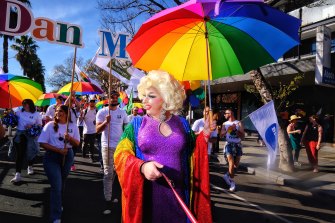 Protester Nick, from Pride in Protest Melbourne, who declined to give their surname, told The Age the police were “rainbow washing” their image by marching.

Nick identified as “a survivor of police violence” and said marching in front of police had been intimidating but also empowering.

In a statement, Victoria Police said it “cherishes the opportunity to celebrate and show our support for LGBTIQ communities and our own LGBTIQ employees at Pride March every year and for the past 19 years.

“Participating in this inclusive event is a proud reminder that Victoria Police is representative of the community we serve. 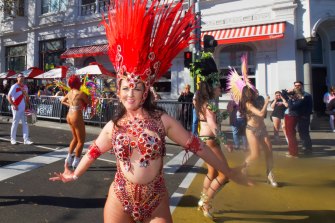 Sashaying down the street: dancers in the 2021 Pride March.Credit:Luis Ascui

“It also represents an opportunity for police to publicly show our commitment to rectifying wrongdoings of the past.

“We are committed to further improving and remain steadfast in our commitment to building strong relationships with LGBTIQ communities – relationships built on respect, trust and fairness.”

Karen Bryant, chief executive of the Midsumma Festival that runs Pride March, said the protesters registered under another name and were not allocated to march in front of police.

But Ms Bryant said the protesters were entitled to have their say peacefully, which they did.

One march spectator, Claire, 49, who didn’t want her surname used because it might affect her employment, said she was “mortified” at the protest against police.

She told her daughter, Olivia, 8, that although there were differing views, most people believed police helped people, and that they should be respected.

Pride March participant Erin, 47, said police marching helped changed perceptions in a positive way among both the public and other police.

Erin was marching for the first time with her non-binary child, age 11; the latter said the atmosphere at the march was “really fun and there are a lot of friendly people”.

Erin said she didn’t like big crowds but came to support her child “and celebrate diversity”.

Due to COVID-19 restrictions, Pride March 2021 was held more than three months later than last year’s. About 5100 people marched, well down on last year.

Participants had to pre-register. Ms Bryant said it was important that the march went ahead after the social isolation of the pandemic.

Spectators were encouraged to watch from cafes where they would scan-in for contact tracing purposes, or to watch online, but many people lined the street anyway.

On Sunday, the state government announced that Midsumma would run the new, one-off event, Melbourne Pride 2021, celebrating the 40th anniversary of the decriminalisation of homosexuality.

Ms Bryant said it would take place in early December, and include a street party near Gertrude and Smith streets, Fitzroy.