Public sector workers are keeping hold of their jobs and salaries during the pandemic as figures show they earn more than those in the private sector.

Those working in the public sector earned on average 7% more than those toiling in the private sector in 2019, according to the Office of National Statistics.

The greatest earnings difference was in the skilled jobs of the smallest firms – employing 10 or fewer staff – where public sector workers earned 24% more than their private counterparts.

It comes after inflation-busting pay increases announced by the government in July – 2.8% for medics and 3.1% for teachers – cut a deeper chasm between these ‘key workers’ and those who work in supermarkets or care homes.

These taxpayer-funded pay increases will likely take the public sector premium back up to around 10%, which it enjoyed before David Cameron’s coalition government introduced measures to cut the deficit.

The pandemic’s savaging of the private sector will, therefore, further exacerbate the differences between the sectors, as those employed privately will be paid less and be more likely to lose their jobs, while paying higher taxes to cover the increased pay for those employed by the state. 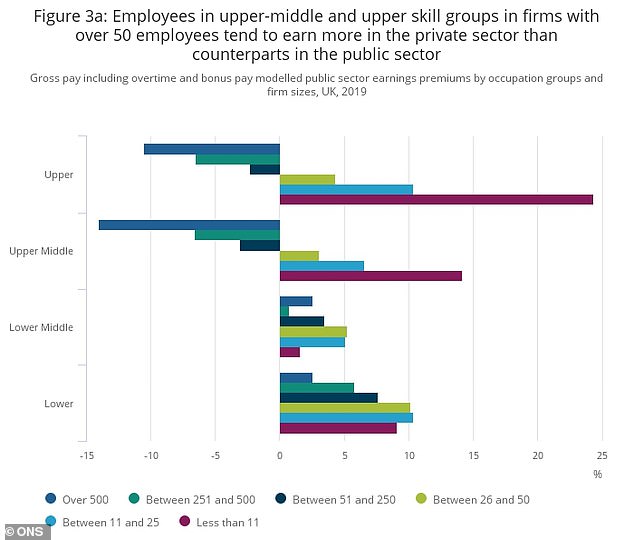 The graph above shows the percentage difference between public and private sector workers employed by companies/organisations of varying sizes. The greatest earnings difference was in the ‘upper-skilled’ occupations of the smallest firms – employing 10 or fewer staff – where public sector workers earned 24 percent more than their private counterparts. 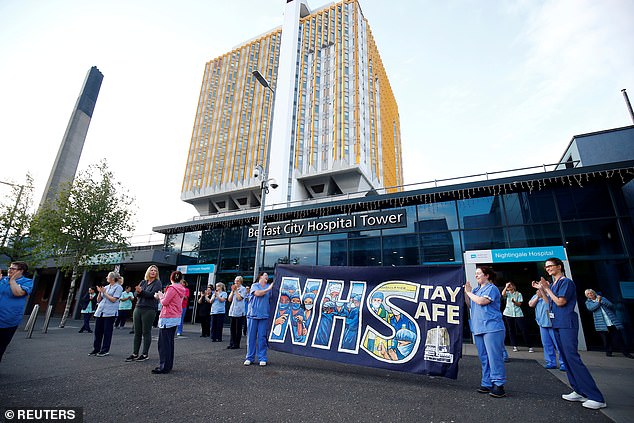 NHS workers in Belfast taking part in the ‘clap for carers’

The largest difference is in the pensions afforded to the different sectors. Most in the public sector are still receiving an inflation-proof defined-benefit pension – based on salary and how long they’ve worked for their employer.

But in the private sector the increased length and diminishing rates of interest on government bonds has made such generous pensions impossible to guarantee.

Pensions are a large component of the ONS workings. They found that 89% of public sector workers contributed to a pension in 2019, compared with 75% in the private sector, notwithstanding the introduction of auto-enrolment in 2012.

In the private sector, employees were predominantly either in a defined contribution scheme (21%), in a group personal pension scheme (21%) or in a National Employment Savings Trust (15%).

Of those with no pension, 11% were paid by the state and 26% by a private company.

Writing in The Sunday Times, Dominic Lawson argued that the government is staring down the barrel of strikes by teachers and medics if it moves to stem the national debt – which has soared past the £2 trillion mark – with a pay freeze.

‘There will probably be calls for industrial action from the main teachers’ union under its reliably militant leader, Mary Bousted, and from the British Medical Association.’ Mr Lawson wrote.

‘The latter will provide an even more than usually difficult opponent for a Conservative administration that has sanctified the NHS for political reasons — and because doctors and nurses had put themselves under the most extraordinary pressures when working to save patients from the coronavirus during the peak of infections.

‘But it is not just the carers (clapped every Thursday during the height of the pandemic) who enhance our lives. A tirelessly helpful waitress, a wonderful cook, a solicitous barman in a pub — all these people make us feel better. Perhaps, given their present predicament, we should have a clap for caterers.’

Other major determining factors for the difference between the two sectors was the age of employees, their sex and their skill level.

Young workers tend to be paid less than older workers and in 2019, the mean age of private sector employees was 40 years, while in the public sector it was 44.

As regards sex, women on average earn less per hour than men – a subject which the ONS has covered in great detail.

The report also noted that the public sector employees more skilled workers than the private sector: 47% of those being paid by the state are ‘upper-skilled’, compared with a quarter of those paid privately.

‘Upper-skilled’ workers include scientists, IT engineers, medics, teachers and lawyers.

Meanwhile the lower-skilled occupations in the public sector were paid more on average than those in the private sector: £13.62 per hour versus £11.24.