Pubs turn to CANDLELIGHT due to soaring energy costs: Landlords say they are switching off their lights during week to try and lower ‘extortionate’ electricity bills

The owners of two pubs have gone ‘back in time’ by switching off the lights and serving customers by candlelight to combat ‘extortionate’ energy bills.

They slammed Liz Truss’s energy bills announcement yesterday to half business costs as ‘too little too late’, as costs threaten to close pubs and businesses for good.

While skyrocketing gas and electricity bills have been tough for domestic customers, businesses do not have the same price caps as residential properties so their bills can rise even higher.

The Masons Arms in Camelford, Cornwall is now purely candle-lit every Monday, with all light switches turned off.

The Thomas Daniell pub in Truro will do the same for one day in October. The gastropub has also had to close on a Monday and Tuesday each week recently since electricity bills began to leap up.

Alan Woods who has run the Masons Arms for just over four years said the move was to combat the ‘extortionate’ price of electricity which could cripple the business while also providing a new atmosphere.

Mr Woods said things went ‘crazy’ as soon as Britain emerged on the other side of the bulk of Covid restrictions. 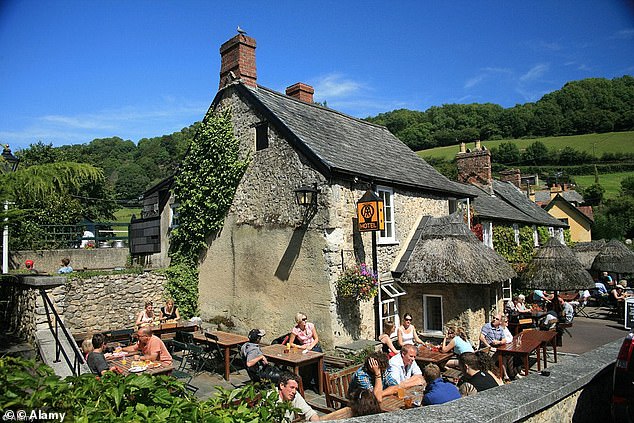 The Masons Arms (pictured) in Camelford, Cornwall is now purely candle-lit on Mondays, with all light switches turned off 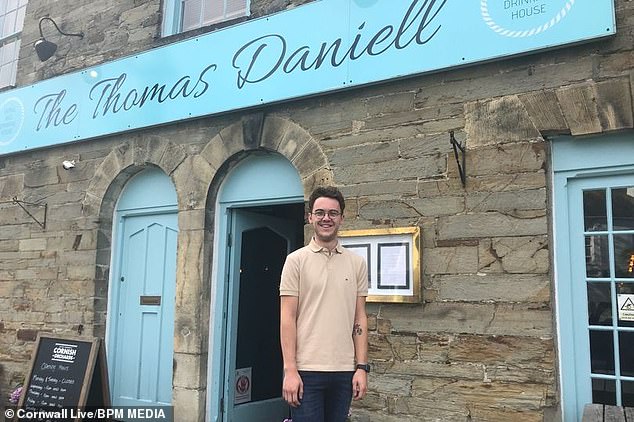 Jamie Hilton-Lavender (pictured), manager of The Thomas Daniell, said the candle-lit night is a way to offer something different to customers while curbing the exploding energy bills

‘We had those few months when it was going great again and the pub was livening up,’ he said. ‘Then we had our energy bills and it went mental – how has it gone that crazy?

‘We’re all in the same boat as small businesses. There’s only so much you can do to help.

‘People are all looking at strategies, closing their doors a few days a week, or even permanently. Come October, we’ll see what the increases are but it’s not looking good.’

‘It was known as The Kings Arms.

‘Travel back in time where the pub will be lit by candle light throughout, also our normal menu and our Autumn menu will be running.

‘This will also help us to lower our extortionate electric bill and give you a unique evening.’

Mr Woods said he hopes it’ll save some money and help people remember that small local businesses are suffering just like individuals.

Jamie Hilton-Lavender, manager of The Thomas Daniell, said the candle-lit night is a way to offer something different to customers while curbing the exploding energy bills.

He’s gone one step further and is turning off the mains entirely. On October 4 the lights, tills and everything in between will be off.

‘Everyone’s struggling with the cost of living,’ Mr Hilton-Lavender said.

‘It’s getting out of control.’ 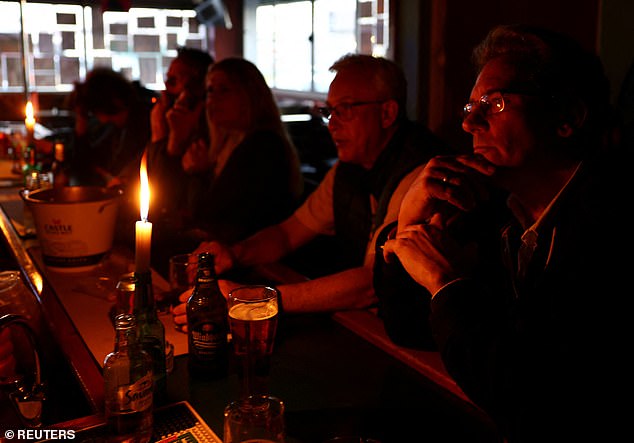 What your pub outings may soon look like. Pictured: People sit in a pub by candle light due to South Africa’s struggling power utility Eskom, implementing regular power cuts – called ‘load-shedding’ – because of ageing coal-fired power stations, in Cape Town on Tuesday

He said that The Thomas Daniell has had to close on a Monday and Tuesday each week recently.

This decision was made after electric bills began to leap up.

He added: ‘There’s only so much extra you can charge your customers to come in, some of the costs you have to bring on yourself.’

Mr Woods said, pubs like his are facing impossible decisions about the future of the business.

Running costs are forcing many to close earlier, cut menu items or even lay off staff.

How the price cap will work

The Government will push through emergency legislation to underpin the new relief scheme once Parliament returns from its break for the party conferences in October.

For customers on fixed-price contracts, if the wholesale element is above the new Government cap, the price per unit will be automatically reduced for the duration of the scheme.

Customers with default, deemed or variable tariffs will receive a per-unit discount up to a maximum of the difference between the Government rate and the average wholesale price over the period – the maximum discount is expected to be around £405 per MWh for electricity and £115 per MWh for gas.

For customers on flexible purchase contracts, typically those with the highest energy needs, the level of reduction will be calculated by suppliers, subject to the same maximum discount.

A parallel scheme will be established in Northern Ireland.

The government gave the example of a pub using 4 MWh of electricity and 16 MWh of gas a month:

For Mr Woods the issue is particularly problematic as he lives above the pub with his family of five.

He went on: ‘It’s a strange one, we’ve always argued that the bit upstairs is different but energy companies won’t distinguish.

‘So we’re always being charged business rates in the evening for our family.

‘It’s worrying for everyone, overall.

‘We have to just keep ploughing on since everyone’s struggling, everyone’s watching their pennies.’

Yesterday, the Government announced that energy bills for UK businesses will be cut by around half their expected level as part of a major support package. The scheme will fix wholesale gas and electricity prices for firms for six months from October 1.

Emma McClarkin, chief executive of the British Beer and Pub Association, said yesterday that  the energy support ‘will be a lifeline for many pubs and brewers this winter’.

But she added: ‘Whilst this announcement has helped businesses to breathe an initial sigh of relief as they head into this critical period, more support is needed to tackle the cost of doing business and we need a plan beyond the next six months.

‘Our industry is one of only a few that supports jobs and livelihoods in every single part of the UK, and we have the potential to deliver growth in every single community we serve.

‘On Friday, the Chancellor must take steps to address the cost of doing business, by reducing the tax burden on our sector, allowing pubs and brewers the chance to not only survive this winter, but remain at the heart of local economies and their communities for many years to come.’

Melissa Evans, 47, who has been in the industry for 21 years and a landlady for the last three and a half, said last month the rise in prices is beyond laughable and has had to close at 9pm recently due to high energy bills.

She said her pub, The Plough, in Whitstable, Kent, has seen its utilities bills skyrocket in recent months.

Her original business plan when she took on the pub forecasted bills for electricity and gas at £8,000 per year, which she described as ‘amusing’ in hindsight.

‘I’m now looking at £33,000 just for gas and I now need to work that into my business without affecting my staff and customers,’ she said. 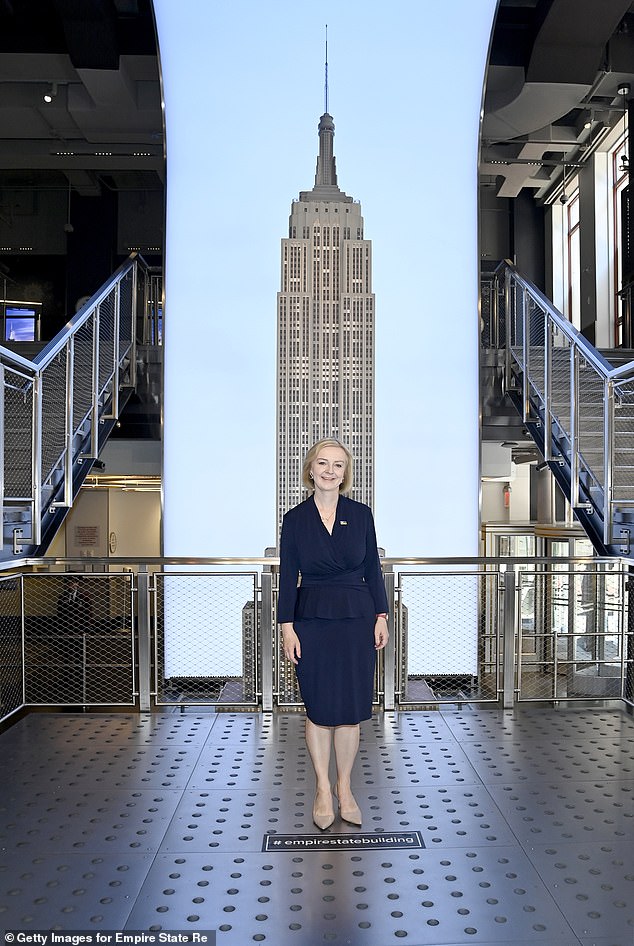 Prime Minister Liz Truss announced that a cap will come in from October that will half wholesale costs until March next year at the earliest. It will also be backdated for contracts agreed on or after April.

As pubs risk having to charge upwards of £10 for a pint Ye Olde Fleece Inn in Kendal, which dates back to 1654, has seen a huge increase of £80,000 to it’s annual electricity bill.

The beloved historic pub currently pays £44,000 for its annual electricity bill, but was last week quoted £124,000 for the 12 months from Christmas.

‘It is absolutely horrendous,’ Chris Moss, a director of Westmorland Hospitality, which runs the Fleece, told MailOnline in August.

‘The government needs to get a grip on this or we risk losing the British pub forever.’

‘We have to make that decision. Are they going to intervene? or are we just going to move forward and say the pub is going to be no more?’

He said while they had expected their bill to rise they were so shocked by how much it had gone up they had to check it with their broker, adding it has ‘probably increased again since then.’