The Puffing Billy scenic railway has lifted a ban on passengers dangling their legs out of carriages, allowing for the return of the more-than-century old-tradition, much to the delight of riders.

Puffing Billy Railway chief executive Peter Abbott announced the overturning of the ban on Friday, nearly four years after the train collided with a minibus in March 2018. 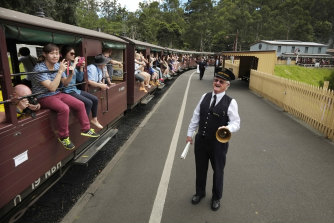 Station master Ian Gibson calls all aboard as passengers let their legs hang out at Belgrave station in 2015. Credit:Eddie Jim

“It’s been a labour of love for our team, partners, and supporters, and we are absolutely delighted to be able to offer the iconic sitting on the sills experience to adults and children aged from four to thirteen once again,” Mr Abbott said.

“Nothing beats the ride through the towering forests, around bends, over bridges and streams, waving at passers-by, all the while sitting on the carriage sill as Puffing Billy steams gently along the tracks.”

The temporary ban was announced in the wake of the minibus crash, and drew the ire of passengers and locals who mourned the tradition for the popular attraction, which has been running since the early 1900s.

At the time, hundreds of people took to Puffing Billy’s Facebook page to vent their frustration. Many thought the ban was an overreaction to the crash, while others feared the decision would spell the end for the historic tourist train.

Nobody on the train was injured in the crash, but one of the sixteen people on the minibus was taken to hospital.

The ban’s overturning follows safety reviews and upgrades, which were delayed because of the coronavirus pandemic.

Keen riders celebrated the freedom to once again dangle their legs outside the Puffing Billy’s carriages on Friday, with dozens jumping on board to be the first in years to do so.

One passenger told Nine News, “it’s all childhood memories and it’s fantastic to see it’s all coming back after it was taken away for so long”.

Deputy Premier James Merlino said, “One of the most consistent questions I’ve been asked over the last few years is, ‘When can we get our legs back out, dangling at Puffing Billy?’”

Tourism Minister Martin Pakula, who also visited the steam train to celebrate the occasion on Friday, said it was wonderful to have the tradition back “as someone who grew up and travelled Puffing Billy as a young kid”.

Sitting on carriage sills is only allowed on the Puffing Billy’s Belgrave Station to Lakeside Station route, and children aged between four and 13 must be supervised.