A member of the Russian punk band Pussy Riot was flown to a Berlin hospital overnight after a suspected poisoning, as his estranged wife said on Sunday it may have been attempted murder.

Pyotr Verzilov, who has both Canadian and Russian citizenship, was admitted to a clinic in Moscow on Tuesday after falling ill following a court hearing.

Described by staff as being in ‘serious’ condition, the 30-year-old was initially treated in intensive care and later regained consciousness. He was however still experiencing hallucinations and delirium, his girlfriend told Russian media on Friday.

Late on Saturday, he was flown to Germany aboard a medical helicopter chartered by the Cinema for Peace Foundation, an NGO which has long supported the band’s activism. 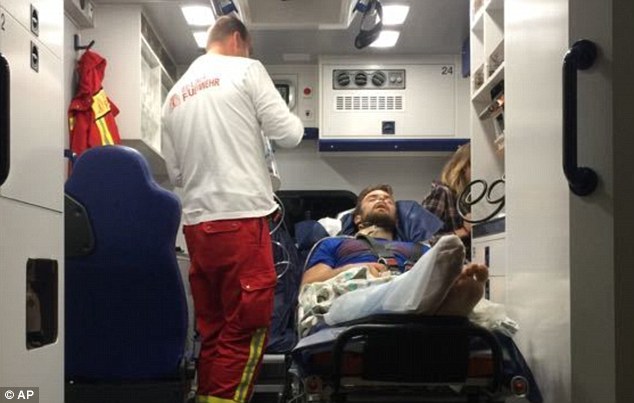 Pyotr Wersilow, member of the Russian Punk band ‘Pussy Riot’ receiving medical treatment in an ambulance as he arrives at Berlin’s Schoenefeld airport

On arrival, he was met by Pussy Riot’s Nadezhda Tolokonnikova, his estranged wife, who told a German newspaper the poisoning may have been an attempt to kill him.

‘I’m working on the principle that he was the victim of either an act of intimidation or attempted murder,’ she told the Sunday edition of Bild.

Speaking to a Russian website on Friday, his girlfriend Veronika Nikulshina, also a Pussy Riot activist, said it was ‘definitely poisoning’.

She said he had been administered a ‘large dose’ of anti-cholinergic drugs, which are used to treat a range of issues including lung conditions. His family said he was not on any medication.

Verzilov’s collapse on Tuesday came after he and Nikulshina had served a 15-day jail sentence along with two other Pussy Riot members for invading the pitch during the World Cup final in July to highlight Russian police abuses.

Jaka Bizilj, who chairs the Cinema for Peace Foundation, said the NGO had urgently despatched an air ambulance to bring him to Berlin to run tests. 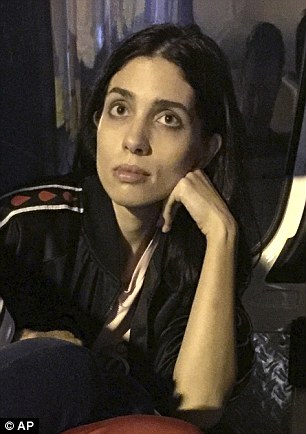 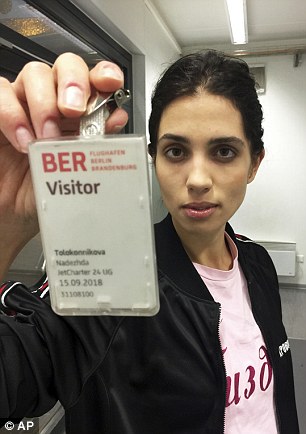 Nadezhda Tolokonnikova, the ex-partner of Pyotr Verzilov, arrives in Berlin after he was taken ill. She said she thought it was ‘either intimidation or attempted murder’

‘It was important for the family that he be hospitalised as quickly as possible outside of Russia,’ he told Bild.

‘We hope it will be possible in Berlin to quickly help him and see if he was poisoned in Russia, and how,’ he added.

The paper said the German government was also involved in talks over transferring him to Berlin.

‘They found a doctor there, he will give a diagnosis and treat him,’ she said.

Writing on Facebook, his girlfriend Nikulshina expressed relief he had been transferred out of Russia.

‘Three times hurrah to everyone who wrote, phoned, visited, cried and sang: we’re in Berlin. All is well,’ she wrote.