The Russian President vowed to continue to boost the country’s army in a speech to military graduates at the Kremlin yesterday. Body language expert Judi James said Putin appeared “determined” to put on a show of strength as he took to the stage amid ongoing rumours over the state of his health as his brutal invasion of Ukraine continues.

Ms James said the Russian leader had a “new sense of swagger”, speeding up as he neared the podium.

She added that he adopted a “leg splay” during his speech to show “personal strength and confidence” with “on-message” facial expressions.

But Ms James said there were signs his bid to display strength was “might not be consistent” as he shifted his legs to a less powerful stance.

The body language told Express.co.uk: “‘We will be even stronger’ are Putin’s words during a speech that looks more like a sales pitch, and it is strength that he seems to be trying desperately to convey in his body language too, following speculation about his health. 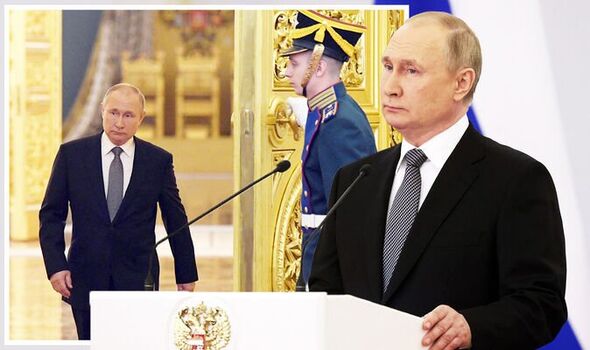 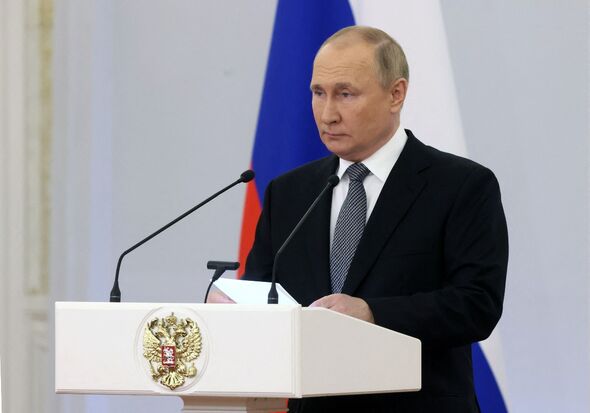 “He arrives with a new sense of swagger in his walk, moving quickly and even accelerating to bound up the steps to the stage.

“His lips are sucked in as he does so, suggesting a desire to show resolve and determination.

“His adopted pose on stage and the one that he clearly sees as his intentional gesture to the audience involves the kind of wide, symmetric leg splay that is normally associated with personal strength and confidence.

“He spreads his feet wide and holds the sides of the lectern with his hands. 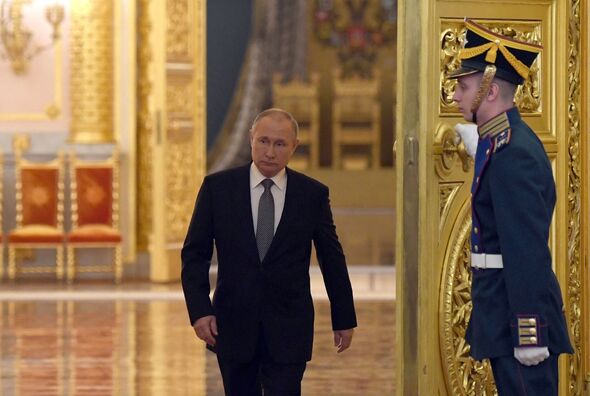 “However there are some changes of position as he makes his speech that suggest the ‘strength’ he is selling might not be consistent.

“When he claims they are ‘overcoming them in different ways’ his pose changes as his legs get closer with the weight on one leg in a much less powerful look, while his speech also seems to falter.

“His facial expressions are still on-message though.

“He uses strong and emphatic eye contact on his audience to drum his message of overcoming the enemy home and his features run through a variety of micro-grimaces of what looks like anger and even disgust.”

DON’T MISS
‘It brings in NATO!’ WW3 imminent as Putin ‘flexing muscles’ in Baltic
EU withdrawal allowed Britain to ‘take the lead’ in Ukraine
How powerful is the Sarmat ballistic missile ‘Satan 2’ rocket? 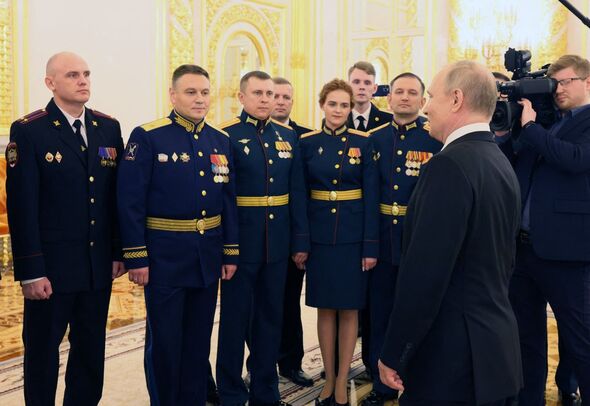 In his speech, Putin insisted there is “no doubt” that Russia would become “even stronger”.

He claimed Moscow was facing “another set of trials” but would “overcome them”.

The Russian leader, who launched his devastating attack on Ukraine in February, also hailed troops for fighting like “true heroes”.

He added that Russia’s newly tested Sarmat intercontinental ballistic missiles, also known as Satan II, would be deployed for combat duty by the end of the year.

Putin’s latest appearance comes amid intense speculation over his health in recent months.

Last month, the Russian President fuelled rumours by covering his legs with a blanket during Victory Day celebrations in Moscow in stark contrast to the strongman image he has tried to project in the past.

Former head of the British Army Lord Dannatt said Putin looked “puffy” and did not appear to be “moving freely”.

It comes as Western officials said there is “more chatter” about the Russian leader’s health and “more speculation” about who will replace him in Russia.

But the Kremlin has sought to downplay speculation with Putin’s press secretary Dmitry Peskov claiming he was playing hockey over the weekend.