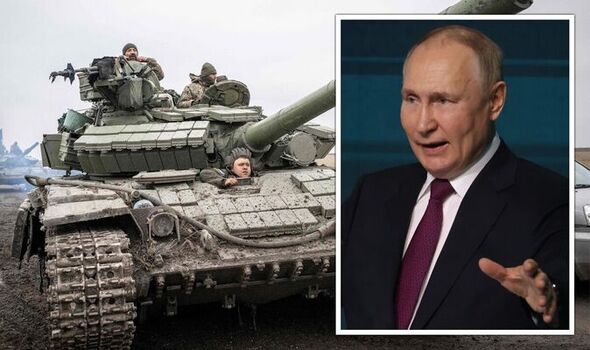 Russia’s troops have pulled back further into the east of the country following a series of devastating defeats, as Vladimir Putin aims to reinforce the few areas he has managed to claim, according to the Ukrainian Armed Forces. Following the retreat from Kherson – the only major city or provincial capital the tyrant had been able to seize – Russia is now reportedly reinforcing its troops in the Lyman, Avdiivka and Novopavlivka fronts.

Notably, all three of the reinforced regions are within Donetsk, which alongside Kherson, Luhansk and Zaporizhzhia is one of the four parts of Ukraine the Kremlin claimed to annex after widely-disputed “referendums” were held in the area.

The need to reinforce them, therefore, suggests that Putin’s grip on these regions is uncertain.

The General Staff of the Armed Forces of Ukraine added that Russia has “been ceaselessly striking civilian targets”, in an effort to “make up for losses of personnel, weapons, ammunition, equipment, fuel and lubricants”.

SEE BELOW FOR MORE LIVE UPDATES

The Ukrainian MP claimed that there had been some “guerrilla warfare” in some regions of Russian-occupied territory and Moscow’s men had been facing resistance from residents who do not want to live under Russian occupation.

Russian President Vladimir Putin installed new governments in Luhansk and Donetsk and reclaimed the territories as parts of Russia in September. Mr Ariev explained that people in occupied regions such as Luhansk, Donetsk and Crimea were not satisfied with the change of government.

Mr Ariev told Express.co.uk: “Some regions in some places there was a guerrilla war.”

“So, in all of those places, there is inter-resistance to the occupants, especially on the newly occupied territories.

“Because people know what was going on in so-called Donetsk and the Luhansk Republic and they don’t want to live in such places like that.

“And Crimea also, where the people are not satisfied with the change of government.”

Good morning, I’m Charles Harrison and I’ll be bringing you the latest updates on Russia’s invasion of Ukraine today. Feel free to get in touch at [email protected]