Putin flexes military muscles: Russian troops storm beach in mock invasion with tanks and helicopters in one of biggest drills since fall of Soviet Union

Moscow showed off its military might today as Russian warships, tanks, planes and helicopters staged a mock invasion on a beach in the Kremlin’s largest military drills since the fall of the Soviet Union.

Some 300,000 troops, more than 1,000 military aircraft and two naval fleets are taking part in this week’s Vostok-2018 drills in Siberia and waters off Russia’s east coast.

Today tanks and soldiers were seen emerging from a landing craft on a beach at Klerka training ground on the Sea of Japan coast, outside the town of Slavyanka, more than 60 miles south of Vladivostok.

NATO has said it will monitor the exercises closely amid tensions with Moscow, as will the United States which has a strong military presence in the Asia-Pacific region.

Some 3,500 Chinese troops were expected take part in the exercises, which run until Monday. 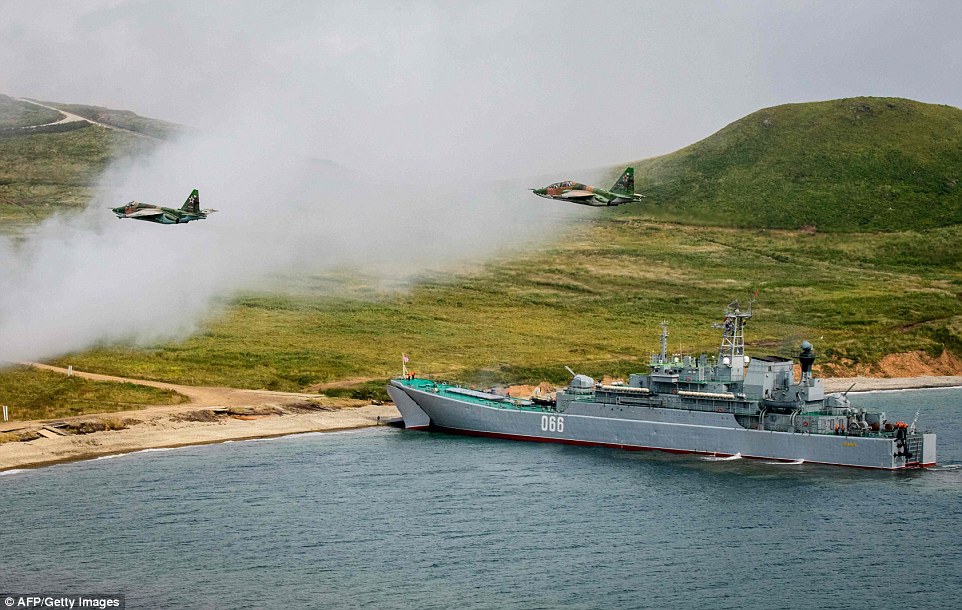 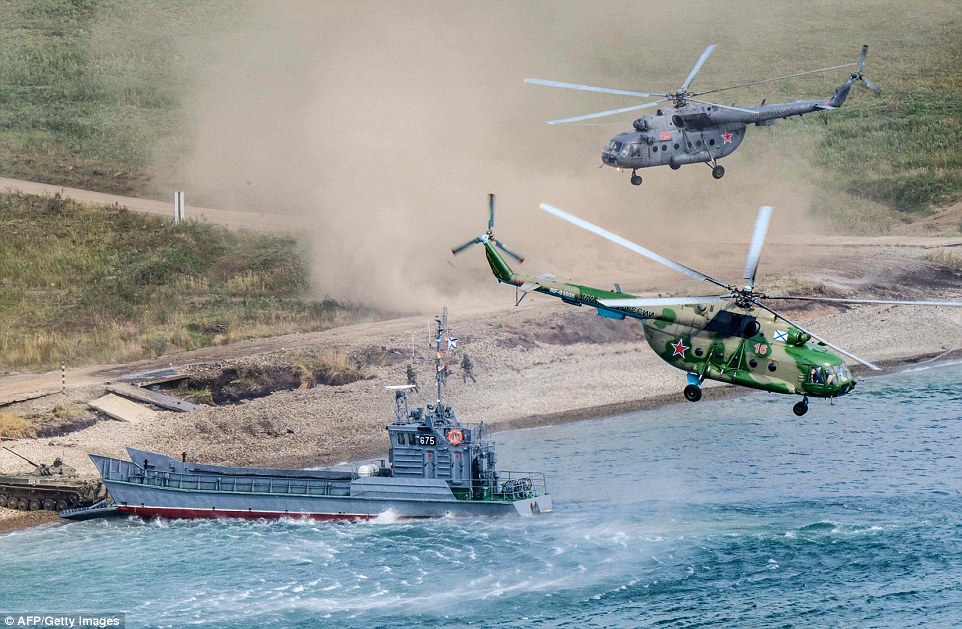 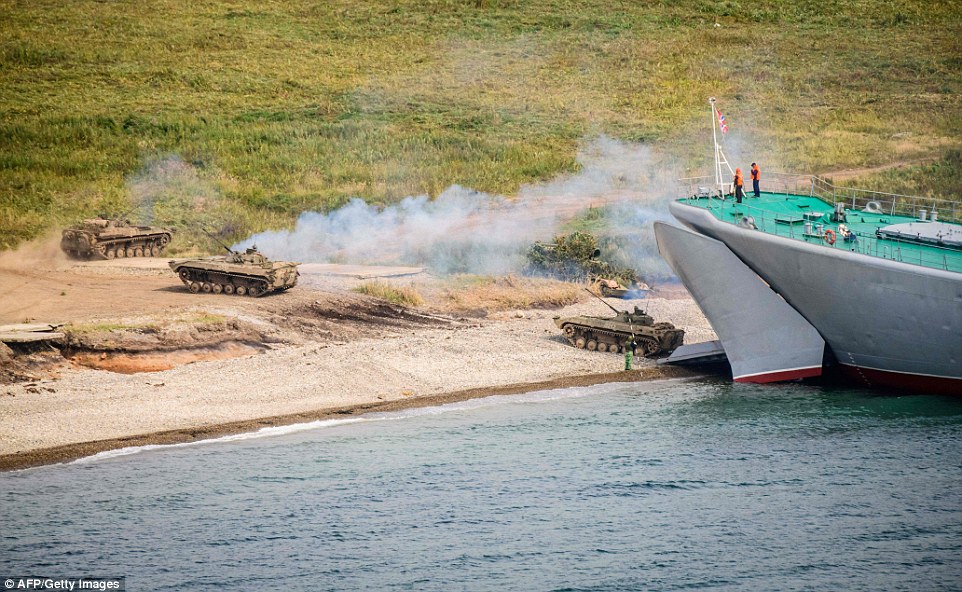 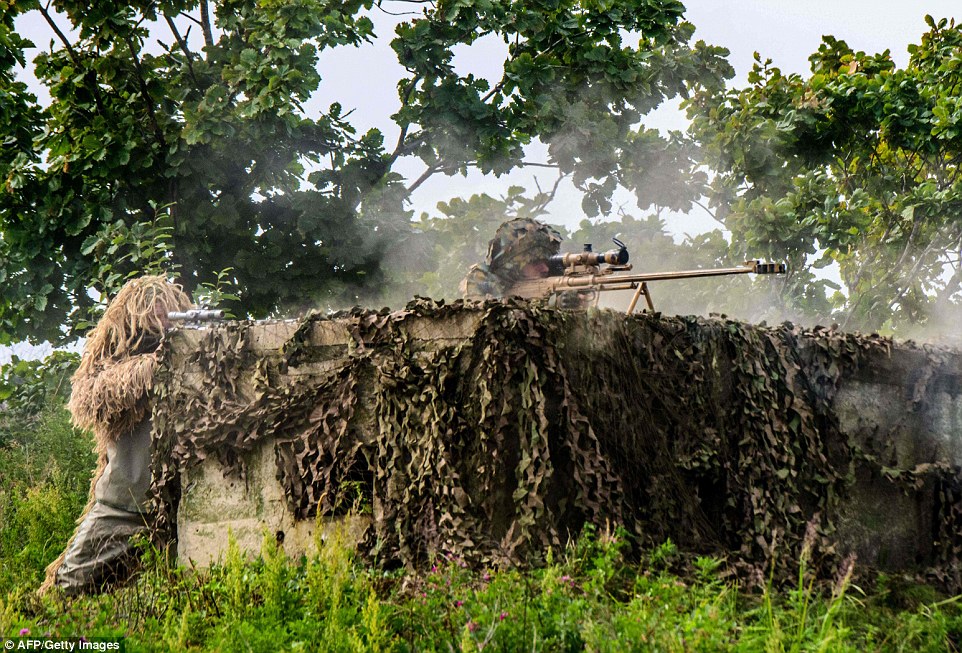 The drills come amid heightened tension between Russia and the West following the poisoning of former spy Sergei Skripal in Britain and accusations of Kremlin-sponsored efforts to interfere in elections.

Russian President Vladimir Putin inspected the war games on Thursday, vowing in a speech to soldiers to strengthen the Russian army and supply it with new-generation weapons and equipment.

Putin said Russia was a peaceful country ready for cooperation with any state interested in partnership, but that it was a soldier’s duty to be ready to defend his country and its allies.

During the earlier drills the Northern Fleet’s Vice-Admiral Kulakov destroyer and the Alexander Obrakovsky landing ship took part in a mock-up rescue operation in the Bering Sea.

Scores of paratroopers were seen leaping from a plane and descending from helicopters by ropes in the eastern Siberian territory of Zabaikalsk. 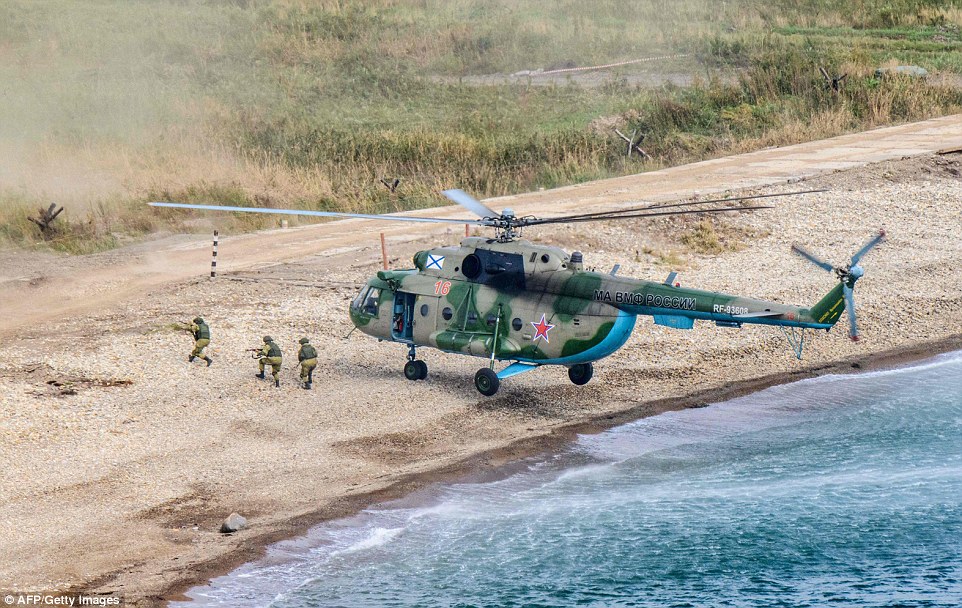 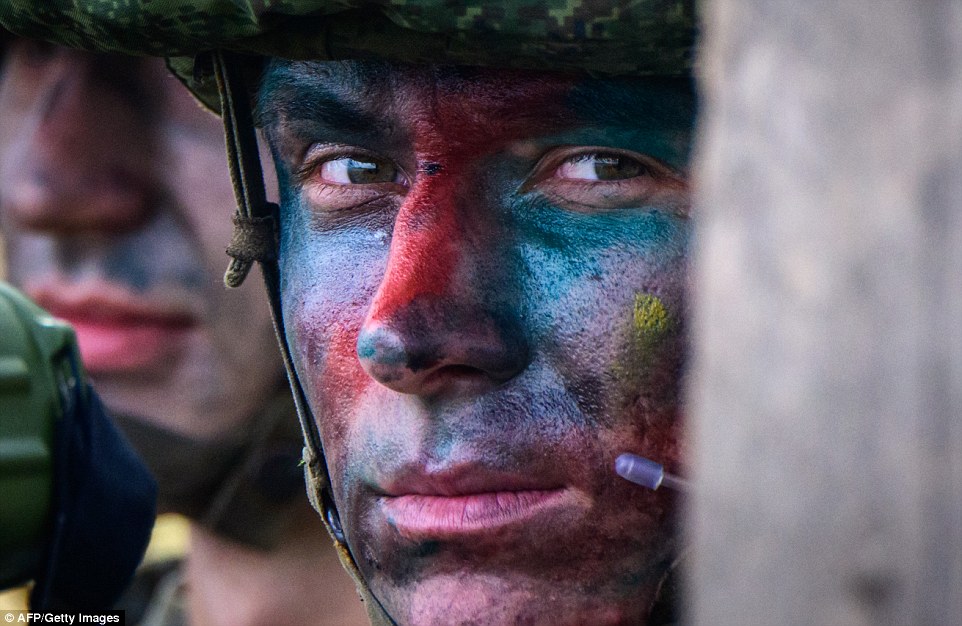 At sea, the Russian fleet is deploying several frigates equipped with Kalibr missiles that have been used in Syria.

Putin praised Russia’s increasingly close ties with China as he met Xi at the economic forum in Vladivostok on Tuesday, saying: ‘We have trustworthy ties in political, security and defence spheres.’

The drills, which also include Mongolian soldiers, have been condemned by NATO as a rehearsal for ‘large-scale conflict’.

‘It fits into a pattern we have seen over some time – a more assertive Russia, significantly increasing its defence budget and its military presence,’ the alliance’s spokesman Dylan White said late August.

‘I think that nations act out of their interests. I see little in the long term that aligns Russia and China,’ he said. 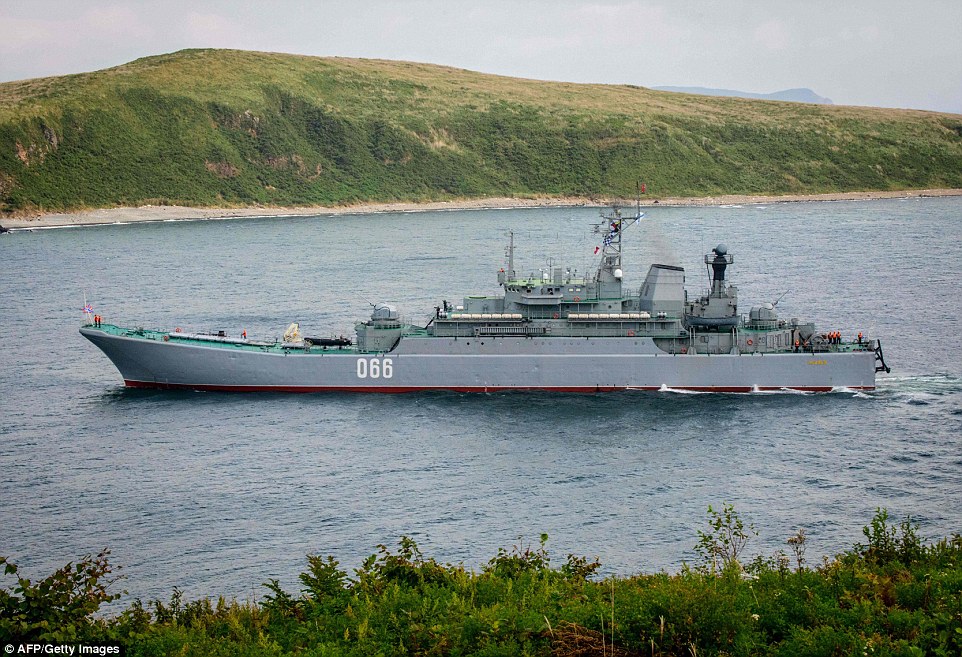 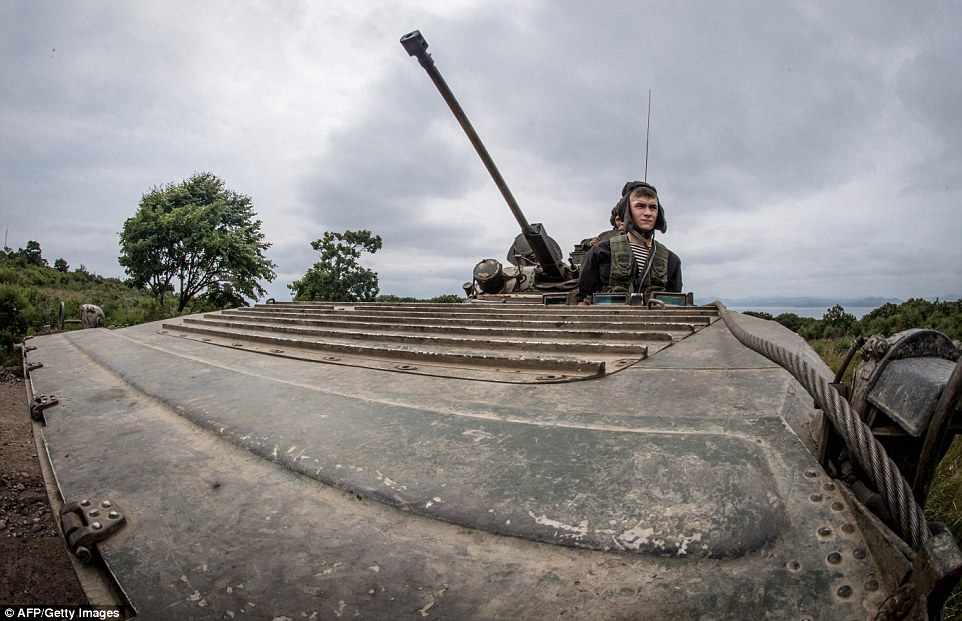 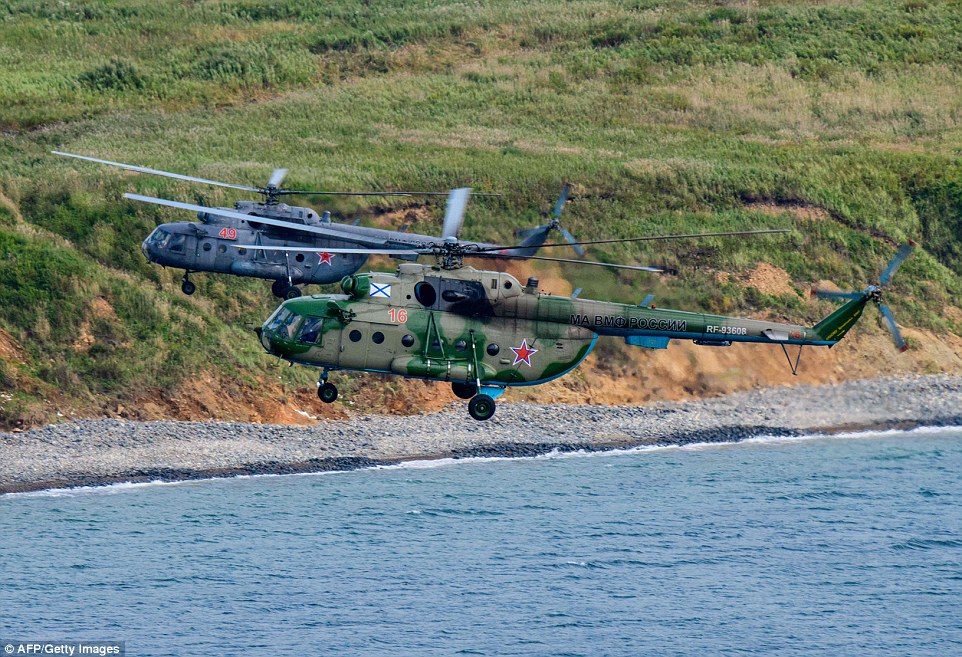 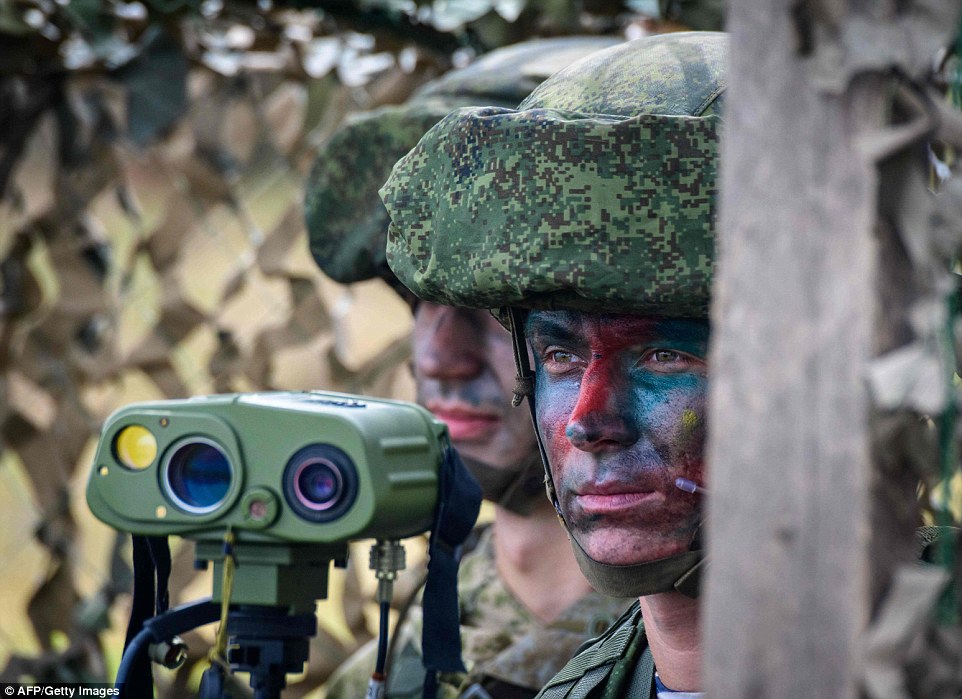 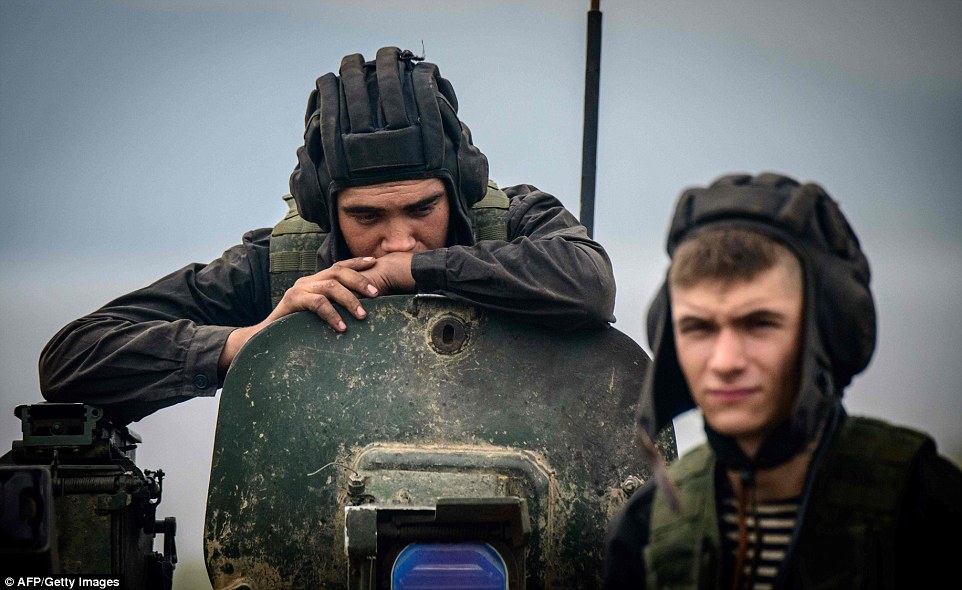