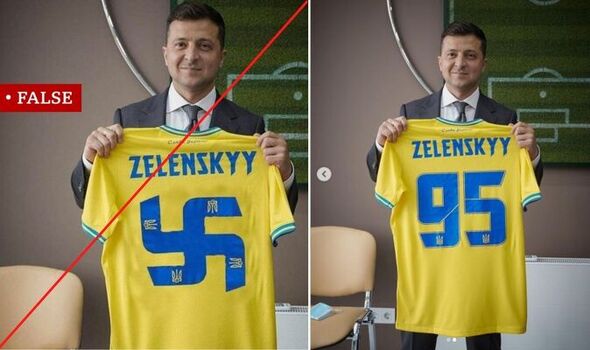 As the Russian troops are raiding Ukraine, causing a deteriorating humanitarian catastrophe, a fake photo of the Ukrainian President, Volodymyr Zelensky was distributed on social media. Before the invasion of Ukraine, Russian President Vladimir Putin had said that he intends to “demilitarise” and “denazify” the Eastern European country.

Matching Putin’s narrative about the war, the doctored image shows Mr Zelensky holding a jersey shirt with a swastika print.

However, it was revealed by fact-checking site Snopes that the image is altered by Russian propagandists, as an attempt to depict Ukraine’s President as a nazi.

Originally, the photo shows Mr Zelensky holding a shirt with just the number “95” on it.

The photo, which is of a jersey of the Ukrainian football team, was uploaded by the President in June 2021, ahead of the European Championship.

In the caption, he says: “The new form of the national football team of Ukraine is definitely special. She knows how to shock.

“It features several important symbols that unite Ukrainians from Luhansk to Uzhhorod, from Chernihiv to Sevastopol.

“Our country is one and indivisible. Crimea is Ukraine.”

The shirt was found a bit controversial at the time as it features an embroidered map of Ukraine including Crimea, which was annexed by Russia in 2014.

After being altered with the swastika symbol, the fake photo was shared by pro-Kremlin accounts and circulated on social media.

At the same time, more evidence of Russian propaganda appear online, such as a video showing a man doing the nazi salute, with the fake claim that it is Mr Zelensky.

Twitter account @hoaxeye posted a screen grab of the video showing that this man is not the Ukrainian president.

On Wednesday, the Russian embassy in London, with a post on Facebook and Twitter, claimed that photos of the bombing near a maternity hospital in Mariupol were fake.

The false claim began from Russia Telegram before it was echoed by the embassy.

It was suggested that Marianna Podgurskaya, a beauty influencer was used as an “actor” to play the role of pregnant women appearing in the photos.

Fact-checkers, however, explained how Ms Podgurskaya, who lives in Mariupol is indeed heavily pregnant, as shown in multiple pictures on her social media, so she could well have been at the hospital.