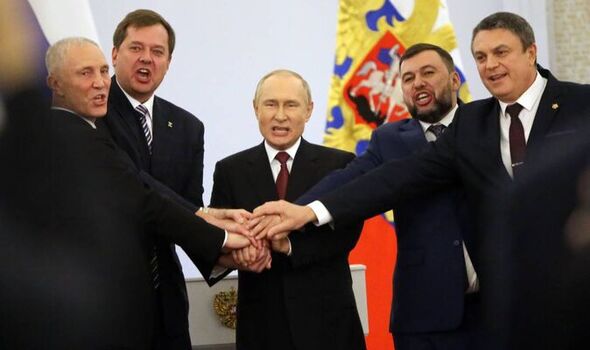 The Russian president launched a 37-minute diatribe against the West, accusing it of “satanism”, of blowing up the Nord Stream gas pipelines and of trying to break Russia “into smaller states”. President Joe Biden has insisted Putin’s actions are a sign he is “struggling” and added that America and its allies “are not going to be intimidated by Putin, his reckless words and threats”.

Seize “He can’t seize his neighbour’s territory and get away with it as simple as that. And we’re going to stay the course. America is fully prepared with our Nato allies to defend every single inch of Nato territory. So, Mr Putin, don’t misunderstand what I’m saying: Every inch.”

Putin said at the annexation ceremony: “I want the Kyiv authorities and their real masters in the West to hear me, so that they remember this.

“People living in Luhansk and Donetsk, Kherson and Zaporizhzhia are becoming our citizens. Forever. We will defend our land with all the powers and means at our disposal.”

In a bizarre anti-West rant, Putin added: “Sanctions were not enough for the Anglo-Saxons. They moved on to sabotage.”

“It is hard to believe but it is a fact that they organised the blasts on the Nord Stream international gas pipelines, which run along the bottom of the Baltic Sea.”

He said the West acted “as a parasite” and used its financial and technological strength “to rob the entire world”.

And, in an alarming threat, he said the US created a precedent for using a nuclear weapon, adding: “The United States is the only country in the world that has twice used nuclear weapons, destroying the Japanese cities of Hiroshima and Nagasaki, and setting a precedent.

“Even today, they actually occupy Germany, Japan, the Republic of Korea, and other countries, and at the same time cynically call them allies of equal standing.”

“History has called us to a battlefield to fight for our people, for the grand historic Russia, for future generations.”

The Moscow-approved heads of each region – Kherson’s Volodymyr Saldo, Zaporizhzhia’s Yevgeny Balitsky, Donetsk’s Denis Pushilin and Lugansk’s Leonid Pasechnik – all joined hands with Putin after signing treaties formally annexing the four regions of Ukraine, in a ceremony at the Kremlin.The event saw masses of Putin supporters gather at Red Square.

Putin delivered his speech on a day when Russian forces killed at least 25 people in missile strikes on a humanitarian convoy.

But his troops were on the brink of another battlefield defeat as Ukrainian forces surrounded the Kremlin’s troops in the strategically important town of Lyman.

Ukraine responded to the annexations by formally applying for Nato membership, raising the prospect – if they are accepted – of Western forces coming into direct conflict with Russian troops.

President Volodymyr Zelensky said yesterday: “We are de facto allies already. We have already proven compatibility with alliance standards. Ukraine is applying to confirm it de jure by an expedited procedure.”

“They are real for Ukraine – real on the battlefield and in all aspects of our interaction. We trust each other, we help each other, and we protect each other. This is the alliance.”

President Zelensky branded Russia a “terrorist state” and “bloodthirsty scum” after the strikes on the civilian convoy. The UK and US yesterday hit Russia with a fresh tranche of sanctions.

Foreign Secretary James Cleverly said: “The Russian regime must be held to account for this abhorrent violation of international law.”

And former prime minister Boris Johnson tweeted: “Vladimir Putin, your speech is a fraud and a disgrace.”