Putting Bento Rodrigues back on the map after the dam disaster

Known around here as “Zezinho do Bento”, he is a survivor of the mud tsunami that swept the Brazilian village of Bento Rodrigues off the map three years ago, when a mining waste dam part-owned by Australian mining giant BHP, failed catastrophically. 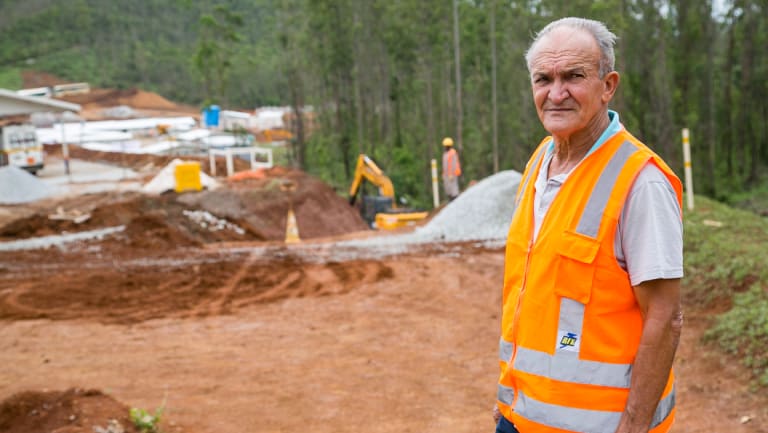 Now, as the villagers fight for compensation, for recognition and for their homes back, the 73-year-old is determined about one thing.

Three years ago on Monday, 40 million cubic metres of iron ore tailings from the Samarco joint-venture mine rushed down the Gualaxo River, a creek-like tributary of the mighty Doce River, ricocheting off its banks and creating waves that turned back on themselves and razed everything in their path. 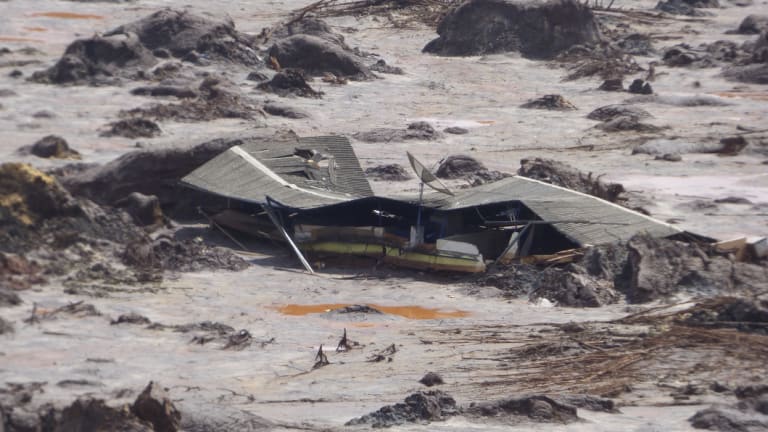 A structure is buried in mud in the Bento Rodrigues valley after BHP-Vale’s Samarco dam failure in 2015.

Wearing only shorts and thongs, Zezinho ran. He was among the last to leave the semi-rural 18th-century settlement of 600.

“There was a small truck at the square, they were taking the elderly. Someone said to grab some stuff from the house, but my neighbour’s wall was already collapsing.”

With the mud at his heels and people screaming all around him on that hot tropical afternoon, the president of the local residents’ association climbed on the truck.

“I don’t like remembering those days. I don’t want to go there, take part in special occasions to mark the dates. I want to erase all that.” 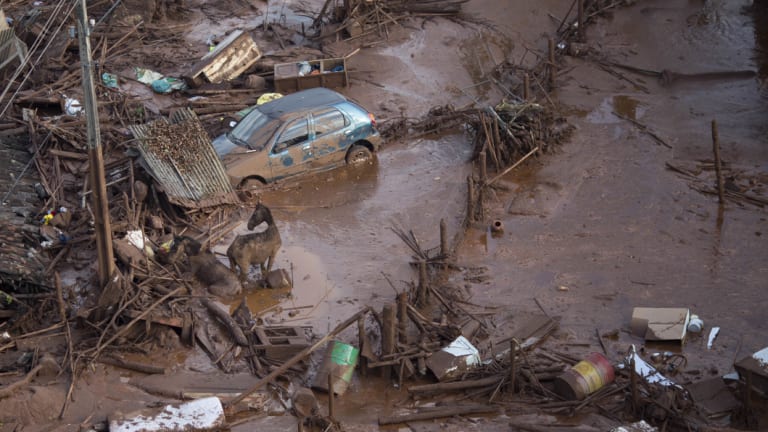 Nineteen people died in the mud that day. Fourteen were workers at the plant’s failed Fundao dam, four were residents of Bento. One, a 60-year-old woman from another town, was fishing nearby.

The mud travelled 660 kilometres across two states and all the way to the Atlantic Ocean, slamming at each bend in the river into another village, another farm, another water treatment plant.

In total it destroyed 324 hectares of forests, 1451 hectares of urban and rural areas, killed an estimated 11 tonnes of fish and polluted the water of the Doce River which serves 230 municipalities.

Three years after a disaster that prosecutors call a "crime" and Samarco calls an "accident", Zezinho is overseeing a different Bento. 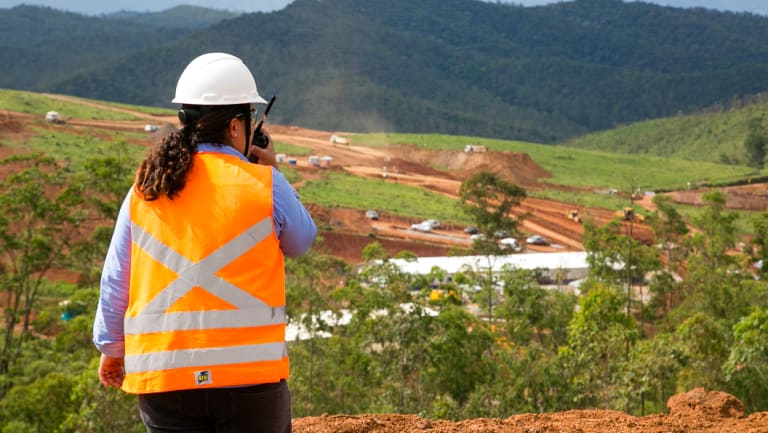 Construction of a replica town, not yet on the map, has begun a few kilometres up the road. Not-for-profit foundation Renova, creted on judges' orders to repair the social, environmental and economic damage caused by Samarco's failure is doing the job. Renova is also tasked with paying compensation to victims at arm’s length from its backers, Samarco and co-owners BHP and Brazilian mining giant Vale.

A former labourer and builder, Zezinho has been chosen by his people to be their legal representative and supervisor at the new development.

“I am the eyes of the old Bento in the new Bento," he tells Fairfax Media.

“I come here every day as a volunteer to make sure they're doing it right. I’m here to defend the community. If our community doesn't agree with something, it will not approve it," he says of the works. 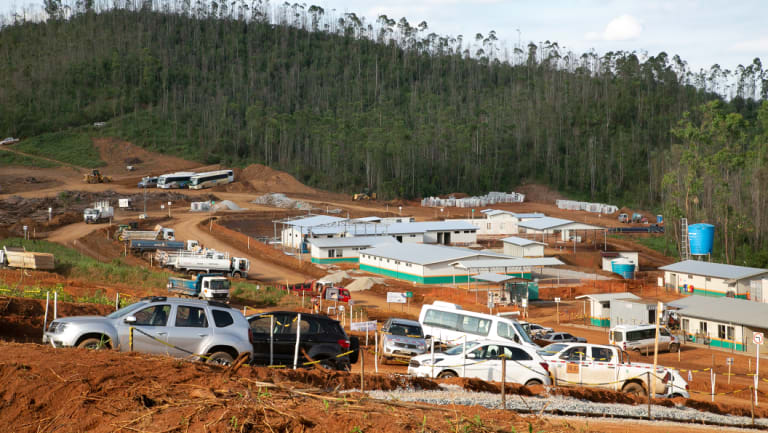 Some 507 Renova employees, along with about 5000 contractors, are working 24 hours a day – under lights at night – to re-create the lost community on 90 hectares of land purchased for the task.

"We want a very similar Bento, but better," Zezinho says. "Similar" is not an exaggeration. One of the most important demands from the people who lost their homes and their loved ones, is to preserve the physical and social character of the old village.

Families want to live in streets bearing the same names, same house numbers and beside the same neighbours as in the past.

Their blocks of land must be the same size, their school built in the same place in relation to the square, the main street, Rua Sao Bento, must host the traditional processions that pepper the local religious calendar. 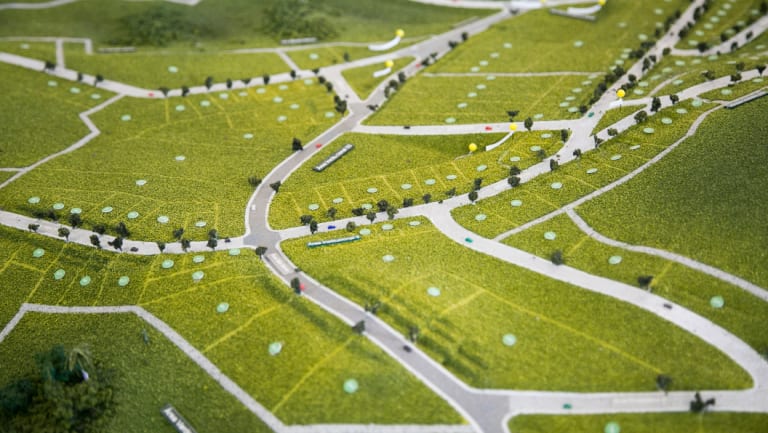 A model of the new Bento Rodrigues on display in a visitors’ area at the construction site.Credit:Lucas de Godoy

The person in charge of the relocation of the communities of Bento Rodrigues, and two other villages, Paracatu and Gesteira, which were also devastated by the mud, is Patricia Lois, a civil engineer and Renova resettlement manager.

With clearing all but completed, and about 20 per cent of earthworks done since permits were granted in August, she is hoping the new Bento may be ready by October 2020. 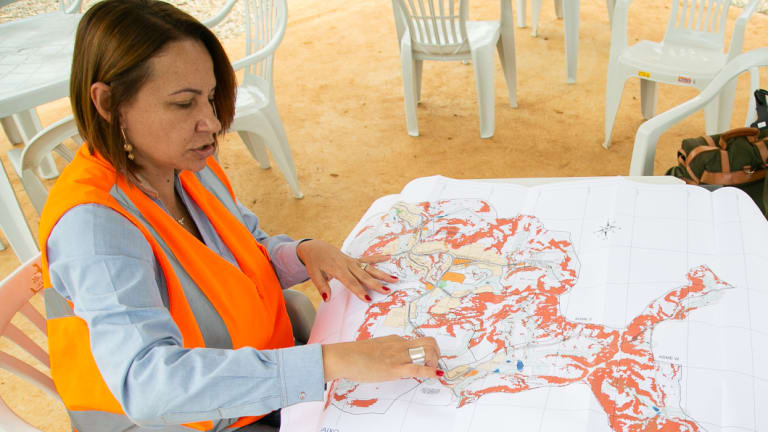 When it is, Zezinho says all 240 Bento families will move in on the same day to close the cycle that began when they all fled together.

But it may not happen so fast. Lois says she must restore the community’s old way of life within new building codes. New laws also have to be drawn in each district to permit the development of land that does not fall within the parameters of modern commercial ventures.

“It’s been a challenge for everyone. But it was a disaster of a magnitude that never happened before,” Lois says.

Whilst she is careful to highlight the community's involvement (next weekend residents are visiting the site to approve their land parcels), these three years have been marred by judicial fights, controversy and never-ending meetings that are often too technically baffling for residents.

Representatives of the “impacted”, as the victims are known, are at lengths to explain that neither the new works, nor the millions of dollars of initial compensation already paid by Renova, have been achieved without legal fights and suffering by vulnerable people. 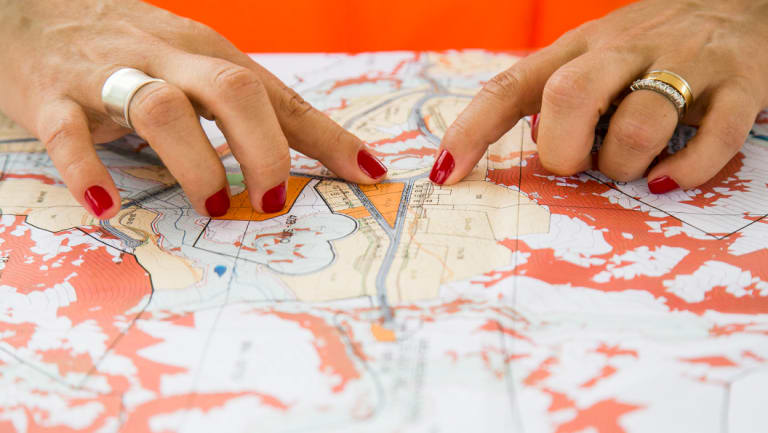 Renova Resettlement Manager Patricia Lois shows the project for the new Paracatu town where construction has not yet started.Credit:Lucas de Godoy

The company says it has already paid 1.2 billion reais ($450 million) in immediate compensation for loss of water, farming and personal income along the entire river. Some 10,000 families along the length of the river, or 25,000 people, receive monthly allowances via a cash card. Families who lost or had to evacuate their homes also have their rent in Mariana, a nearby town of 60,000, paid for, along with medical expenses and other ongoing support.

But resident representatives and activists say at least 40,000 people should be receiving allowances, many more haven't been assessed for compensation as yet. 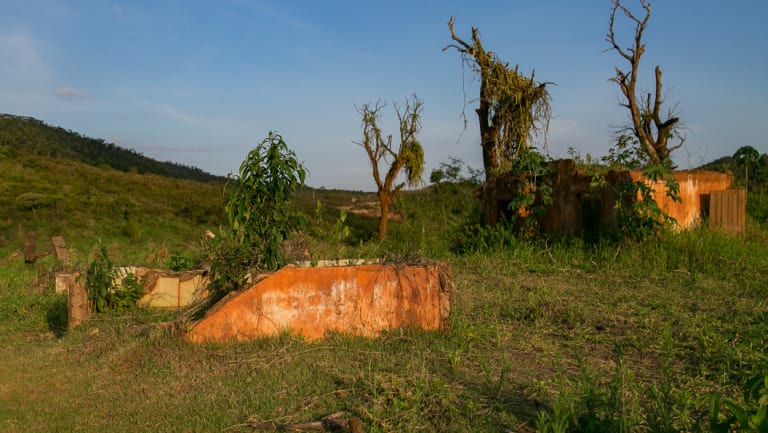 The mud created a new ground level now covered in grass and obscuring what is left of a row of houses in Bento Rodrigues. Credit:Lucas de Godoy

State Public Prosecutor Guilherme Meneghin is responsible for guaranteeing the human rights of the residents of Mariana district, of which Bento and the other two villages are part.

Five days after the dam burst, he launched a lawsuit that blocked the company’s bank accounts and reserved 300 million reais as a guarantee of good-faith in the negotiations.

“The federal and state governments along with the companies were trying to exclude the victims,” Meneghin says referring to the economic importance of mining to the state of Minas Gerais and to the country.

“Within a week, many officials were saying the company had to resume operations – the victims were being undermined.” 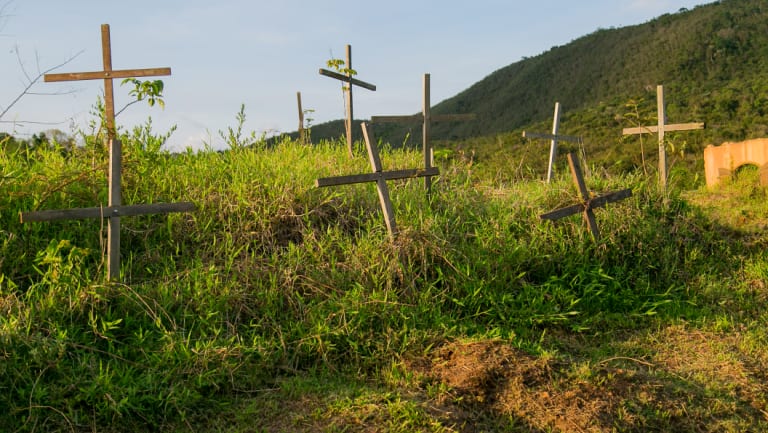 By Christmas 2015, Samarco had been ordered to relocate families from shelters to rental housing and pay allowances to some victims. It was the first of many small victories obtained by the residents and their representatives. Since then many more deals have been done, including last week when the companies formally acknowledged that a three-year statue of limitations would not apply to this disaster.

“It’s very clear [the companies] have at every moment, tried not to sign these agreements,” Meneghin says.

“This was not an accident, it is a very serious crime in the eyes of the law. Everything that has been conquered belongs to the victims. It is their right."