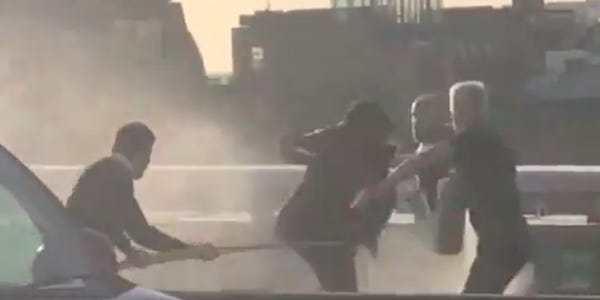 A convicted murderer who used a narwhal tusk to confront the London Bridge attacker in 2019 will see his 17-year prison sentence reduced under a royal pardon, according to the Ministry of Justice.

Steve Gallant, 47, was on his day release at a conference organized to help rehabilitate prisoners when the attacker, convicted terrorist Usman Khan, fatally stabbed two people in the Fishmongers' Hall, close to London Bridge last November.

Images of him chasing Khan across the bridge with a 5-foot narwhal tusk quickly spread around the world.

Gallant has received the royal prerogative of mercy by the Queen, for his "exceptionally brave actions … which helped save people's lives despite the tremendous risk to his own," a spokesperson for the Ministry of Justice told the BBC. The last time a murderer received a royal pardon in the UK was 25 years ago.

The 47-year-old was jailed in 2005 after killing a former firefighter outside of a pub in the northeastern city of Hull. Under the pardon, he will be able to reduce his prison sentence by 10 months and can apply for parole in June 2021.

In a surprising twist of events, the family of the killed firefighter, Barrie Jackson, has supported the decision.

"I have mixed emotions — but what happened at London Bridge goes to show the reality that people can change," Jackson's son, Jack, said, according to the Guardian. Jack also said he would not rule out meeting his father's killer in the future.

Gallant was one of a handful of civilians who tried to thwart the terrorist attack on the iconic bridge on November 29 and were praised for their heroism.

Khan, who had previously served a prison sentence for terrorism-related charges, had also been invited to the Learning Together event as a rehabilitating offender out on license.

At the event, the 28-year-old, who was wearing a fake explosive belt, pulled out a knife and started stabbing people, killing two of the conference coordinators, Jack Merritt, 25, and Saskia Jones, 23.

He was later shot dead by police.

Gallant, who was inside Fishmonger's Hall at the time, took an antique 5-foot narwhal tusk from a wall to use as a weapon and chased the terrorist on to the bridge.

"I could tell something was wrong and had to help. I saw injured people. Khan was stood in the foyer with two large knives in his hands. He was a clear danger to all," Gallant later said, according to the BBC.

Merritt, who was a course coordinator for Learning Together, had mentored Gallant while he was behind bars. Gallant described him as a "role model and friend."

Merritt's father David, 55, said: "Steve fully deserves this pardon or reduction in sentence. It is fantastic. He was very close to Jack and he turned his life around and reformed. I am really pleased for him," according to the Guardian.

Speaking about his conviction for murder, Gallant said: "It is right I was handed a severe penalty for my actions. Once I'd accepted my punishment, I decided to seek help. When you go to prison, you lose control of your life. Bettering yourself becomes one of the few things you can do while reducing the existing burden on society," the Guardian reported.

"Steve feels a debt of gratitude to all those who helped him to achieve a royal prerogative of mercy. He is passionate about using his knowledge and experiences to help others steer away from crime," Gallant's solicitor, Neil Hudgell, said, according to the BBC.