Theresa May’s as opaque as the glass in an old municipal lavatory: QUENTIN LETTS on yesterday in Parliament

As superglue drips, so did we all sit through another of Theresa May’s parliamentary turns on Brexit. Within seconds, the House was rigid.

Officially the Prime Minister was at the despatch box to talk about last week’s EU summit but most MPs asked her about Brexit. The optimistic fools.

She is a Sphinx. Questions are blasted at her. Occasionally a lump of her face falls off and a few years later becomes indistinguishable from the desert sand.

The damage does nothing to reduce the ancient statue’s expression of immobile inscrutability. 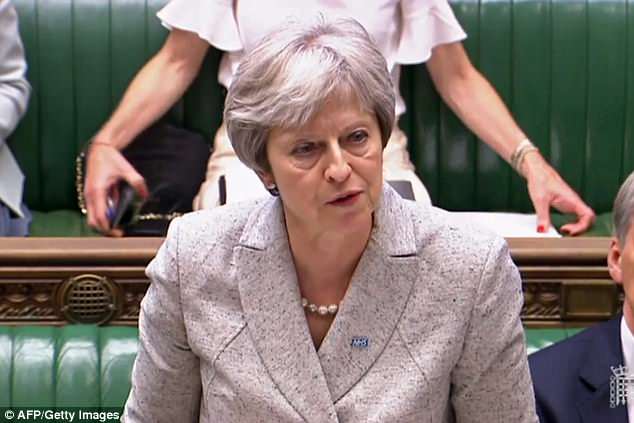 As superglue drips, so did we all sit through another of Theresa May’s parliamentary turns on Brexit. Within seconds, the House was rigid

Words may be uttered but they mean – and are designed to mean – nothing. To be so consistently uninformative, so cryptic, as opaque as the glass in an old municipal lavatory, is actually a feat.

‘We have put forward proposals,’ she said about her negotiations with Brussels. ‘And we will put forward further proposals.’ Er, great.

Around the world, political analysts place raw May verbiage into their petri dishes.

They crouch over the most modern microscopes to try to detect meaning in these tiny off-cuts. What does the British Prime Minister mean? Which way is she leaning? To British independence? Or to capitulation to the forces of Brussels, Barnier and subsidy-junkie multinationals which want the status quo?

These brilliant, white-coated eggheads look up from their instruments, pinkish roundels surrounding their eyes, their Einstein hairdos askew, and for a nanosecond they may think they have a solution. 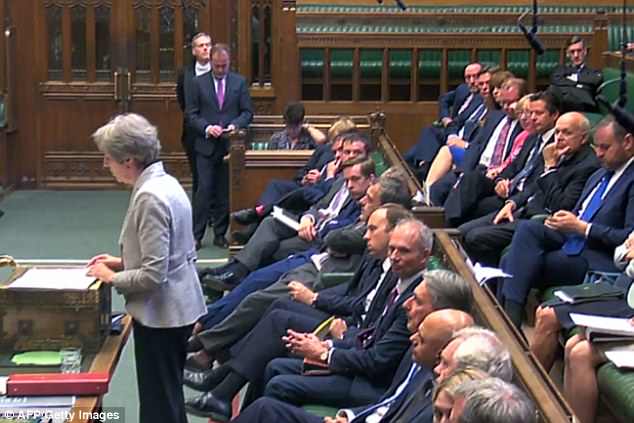 Officially the Prime Minister was at the despatch box to talk about last week’s EU summit but most MPs asked her about Brexit. The optimistic fools

They sense that Mrs May has let slip a tiny hint as to her true intentions. But then they look again and they wearily have to report to their bosses, no, sorry, we simply haven’t a clue what the old girl is saying. She is so comprehensively, ingeniously, glue-ishly uncommunicative.

Listening to the shipping forecast in Finnish, back to front, might be more informative.

Certain theories sometimes take hold, as started to happen yesterday – this time claiming that she was about to buckle to her wetly pro-Brussels civil servant, Olly Robbins, who has been trying to bypass the elected David Davis at the Brexit department.

Robbins is credited (I am sure without any truth) with trying to tweak the minutes from Whitehall meetings to prevent assurances from Mrs May to Mr Davis being recorded by Civil Service note-takers.

Such rumours about Mrs May’s Brexit intentions usually begin with newspaper reports or internet gossip and soon become received wisdom that one side or the other in the Brexit battle is going to take a whack on the schnozzle.

Mrs May is eventually asked about the rumour and reverts to a worn formula of words which may or may not mean ‘nothing has changed’.

Yesterday she was asked if she would go for a Norway-style deal, if she would accept the EEA option, if she would let European courts have a say on our laws after Brexit, and much else besides.

‘There has been much jocularity,’ she said, ‘about the phrase ‘Brexit means Brexit’ – but it does mean Brexit.’ See? This remark actually drew laughter, it was so classically May-ish.

She reiterated that she wanted to do independent British trade deals, to control our own borders and laws, yet still trade with the EU. She says this almost every time she is on parade. 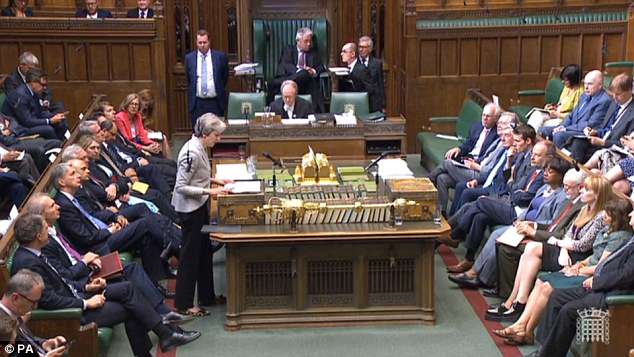 Remainers say she cannot possibly achieve all these things, and they wonder how breakfast waiters ever get Mrs May to opt between the kippers and the eggs benedict.

She was told she must finally make a choice on Brexit. ‘People are fed up with not just Brexit but also with fudge,’ hollered Anna Soubry (Con, Broxtowe).

Other Europhiles such as Nicky Morgan (Con, Loughborough) and Vicky Ford (Con, Chelmsford) wanted Mrs May to reach a ‘pragmatic and practical Brexit’ deal – the new euphemism for a cave-in. Mrs May hosed down their pleas with wordy foam.