Sir Lindsay was still but there was a vulnerability in his face: QUENTIN LETTS sees the Deputy Speaker hold back the tears over his tragic daughter

Shortly before PMQs, Sir Lindsay Hoyle, the Deputy Speaker, quietly took a seat in the upstairs gallery (just a few feet from where your sketchwriter perches).

The engaging Sir Lindsay is not often seen in the Chamber when Speaker John Bercow is in the Chair.

This is tactful of him. Since 2010 he has been a model Deputy Speaker, fastidious about not getting in the way of the less estimable Bercow.

What, then, was Sir Lindsay doing in the House for PMQs? It was certainly unlike him to sit upstairs. 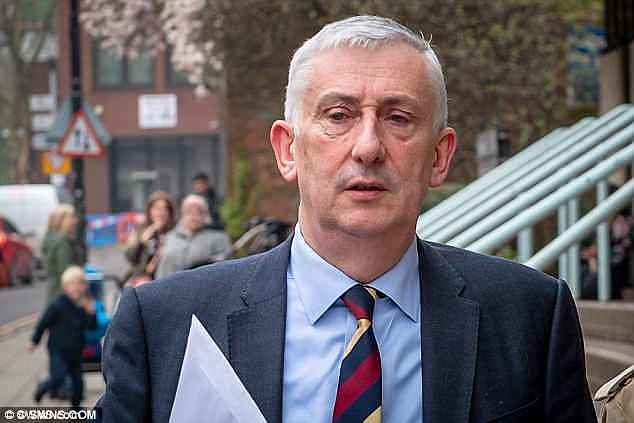 John Whittingdale (Con, Maldon) began by saying that in December one of his constituents had taken her own life. Her name was Natalie Lewis-Hoyle. She had been the daughter of Sir Lindsay Hoyle, the Deputy Speaker (above, leaving the Coroners court in Chelmsford, Essex)

All would become clear when we reached the eighth name on yesterday’s Order Paper list of MPs chosen to put questions to Theresa May.

The name was that of John Whittingdale (Con, Maldon). As Mr Whittingdale stood, the House stilled. Many Members must have been told what he was about to raise.

He began by saying that in December one of his constituents had taken her own life. Her name was Natalie Lewis-Hoyle.

She had been the daughter of Councillor Miriam Lewis and ‘our Right Honourable Friend, the Member for Chorley’. 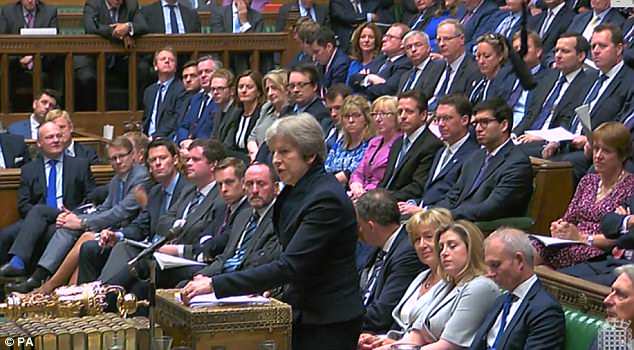 Once Mrs May had said her bit, some women sitting near Sir Lindsay reached out for him, to squeeze his arm and let him know that they were thinking of him

The Labour MP for Chorley, Lancs, is Sir Lindsay.

Mr Whittingdale explained that 28-year-old Natalie had been ‘in a coercive relationship and suffered mental abuse in what is known as “gaslighting”.’

He asked if Theresa May agreed that ‘we need to raise awareness of this particular kind of abuse, and will she support Miriam Lewis in establishing the Chat With Nat website in memory of Natalie to help and advise those affected by this behaviour’.

Mrs May did agree. She did so without milking the moment. Without melodrama she expressed her ‘deepest sympathies’ for councillor Lewis and Sir Lindsay and said she would be happy to offer them her full support.

During these exchanges Sir Lindsay remained impressively still, though there was vulnerability in his face. Once Mrs May had said her bit, some women sitting near Sir Lindsay reached out for him, to squeeze his arm and let him know that they were thinking of him.

At that point, I think many of us would have burst into sobs, but Sir Lindsay is a sturdy Lancastrian.

A big-hearted one, too. Only this week he was tweeting movingly about a ‘beautiful young woman’ from Chorley who had died in the Manchester Arena attack last summer. He did that as one who had lost his own beautiful young daughter, yet he did not make anything of his personal disaster.

The rest of PMQs amounted to little. The highlight was an outburst by the SNP’s Pete Wishart (Perth & N Perthshire) who attacked the House of Lords as ‘800 cronies, donors and aristocrats in that circus down the corridor’.

It could be pointed out, ahem, that the SNP was last week happy to jump on Lords amendments to try to bash the Press.

PMQs were followed by points of order which again dwelt on the bad behaviour of Speaker Bercow. Last week he called Leader of the House Andrea Leadsom various abusive things, not all of them printable.

Andrew Bridgen (Con, NW Leics) rose to enquire if, given Mr Bercow had slandered Mrs Leadsom as a ‘liar’, it was now in order for other MPs to refer to colleagues as liars (something that is at present banned).

Speaker Bercow claimed he was ‘extremely grateful’ to Mr Bridgen for his question but had no wish to discuss the matter further, thangyew.

Kenneth Clarke (Con, Rushcliffe), who once employed Mr Bercow as an aide and is frequently given special licence by the Speaker, tried to help by suggesting it was normal for an MP to mutter that a colleague was stupid. It may well be. But it is not at all normal for a Speaker to do so, complete with F words and in an overbearing, misogynistic manner.

On a day we heard of ‘gaslighting’, only an old fool like Ken Clarke would fail to see that.