May’s eyes swished like two wipes on a tractor: QUENTIN LETTS watches the PM swipe off claims her Brexit deal is in trouble

Theresa May’s aeroplane was at the airport, waiting to whisk her weary bones to Argentina for the G20 summit, but first the Prime Minister had the Westminster equivalent of a trip to the fang bandit: 90 minutes at the liaison committee to discuss her imperilled Brexit deal.

Not that she ever concedes her withdrawal agreement is in trouble. Computer not recognise. Unexpected item in the bagging area. She insists on calling it ‘this good deal’, rather as Mrs Thatcher always dropped her voice and called the poll tax ‘the community charge’.

When anyone suggested she had no hope of pushing the deal through the Commons, Mrs May swished her eyes side to side, two jerky wipers on a tractor’s windscreen, and said MPs needed to ‘focus’ before voting on it. That was her verbal formula. She stuck to it, glueishly. 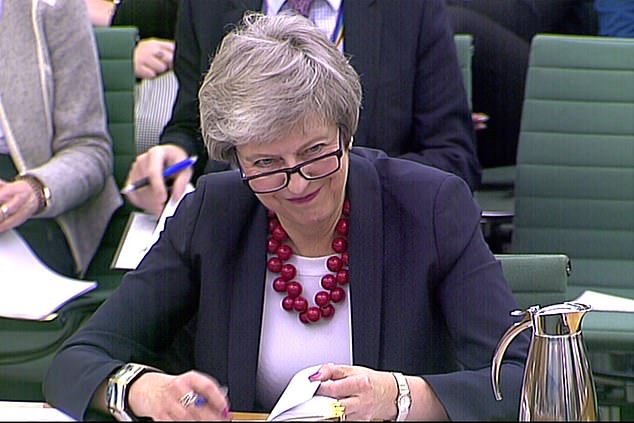 The liaison committee contains all the Commons select committee chairmen. At full strength that means 35 chest-puffing grandees not short on circumlocution. So many mayors of Trumpton. Yesterday, thank goodness, someone had persuaded the stodgier bores to stay away and there were just 13 MPs.

Of these, only four (Sir Bill Cash, Sir Bernard Jenkin, Julian Lewis, Andrew Murrison) were Brexiteers. Yes, the referendum’s Leave majority was represented by just four souls. Thus does the Establishment grip our democracy by its windpipe. Meanwhile, the broadcasting ninnies obsess about a TV debate on Mrs May’s deal – a matter on which only MPs can vote. No Brexiteer will be in that debate. And the political class wonders why it is so hated.

Back to yesterday’s committee. Labour Europhiles Hilary Benn, Rachel Reeves and Meg Hillier were soon ringing their plague bells about what a ‘catastrophe’ it might be if we sail out of the EU without a deal. 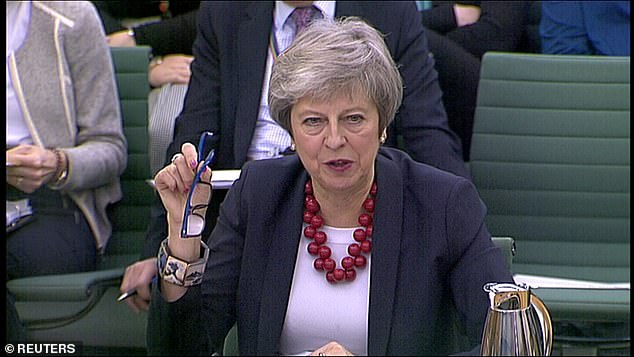 When anyone suggested she had no hope of pushing the deal through the Commons, Mrs May swished her eyes side to side, two jerky wipers on a tractor’s windscreen, and said MPs needed to ‘focus’ before voting on it

Feverishly they predicted disaster and kept trying to get Mrs May to agree she would never allow ‘no-deal’ to happen. Mrs May gave no such undertaking. Miss Reeves quoted economic predictions pumped out by the Chancellor and his friend Mark Carney, Governor of the Bank of England. The elite is at full shriek, blasting forth against ‘no-deal’ like Haig’s howitzers before the battle of the Somme. That didn’t do much good either, as I recall.

Sir Bernard drily noted that George Osborne’s 2016 predictions of immediate economic disaster after a Leave vote had proved to be ‘complete rubbish’. Mrs May stressed that the Hammond predictions were not ‘forecasts’. They were ‘analysis’. 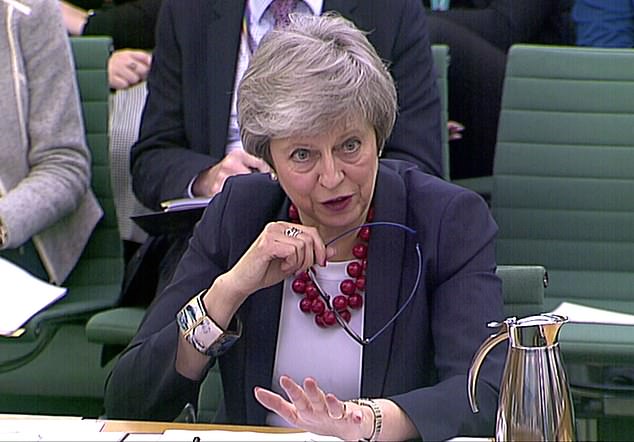 Mrs May stressed that the Hammond predictions were not ‘forecasts’. They were ‘analysis’

Listen to this sort of stuff long enough and you end up chewing the tip of your necktie. Around the committee table Mr Benn kept leaning forwards, mouth open, eyes bulging. Miss Reeves leaned back and hectored in a stiff-necked way, making Mrs May fiddle irritatedly with her pen. Miss Hillier mumbled about how the Civil Service ‘are not going to be able to deliver everything perfectly’ if there is no deal. Dear heart, it’s hardly as if they do much ‘perfectly’ at the best of times. Mrs May plainly thought Miss Hillier a poor piece of work.

The gaze of Pete Wishart (SNP) darted like that of a man about to sprint across a motorway.

Y VETTE Cooper, clutching her chin, watched Mrs May intently, her eyes boring into the PM. Soon she was lecturing the PM in her most kindergarten voice, wobbling her head, going pink with indignation. Mrs May stared back calmly over a pair of turquoise half-moon spectacles.

Mr Lewis asked, eight times, who was going to ‘erect’ the hard border in Ireland if we left the EU without caving in to their thieving demands. Mr Lewis has difficulty with the letter R, so this came out as ‘ewect’. Eight times we had it: Who was going to ewect that blessed hard border. And eight times Mrs May wefused to answer. Because she knew no one is ever going to ewect a wuddy thing on the border. The whole backstop thing is built on a nonsense. Yet she wants it made law.