The head of English at Kambala in Rose Bay has always said “there’s a special magic” to how her subject is embraced at the eastern suburbs private girls’ school. It’s harder to tell what precisely that magic consists of.

“Innovative teachers combined with the all-girl educational space seems to be a recipe for success,” Lauren Walsh hypothesises. 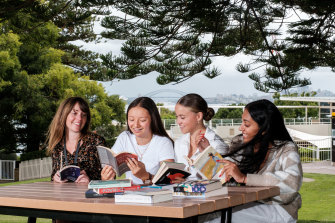 “More specifically, in the English classroom, there is a palpable awareness of the power of voice and language. Our main thing is empowering individual voices, and inviting [the students] to consider texts from their perspective as young women.”

Whatever the method, it certainly materialises in the school’s HSC English results; for several years Kambala has featured among the top English schools in the state.

But the 2021 HSC took that success a step further: 88 per cent of Kambala students to attempt an advanced or extension English course achieved the top mark of band six, by far the best result in NSW.

Next were Killarney Heights High and Menai High, both comprehensive public schools, which achieved 63 per cent and 61 per cent success rates respectively. However, both those schools had only about a quarter of their students taking part in the advanced courses.

When band six results in the three advanced and extension English subjects were compared with schools’ overall enrolment in English, a compulsory subject, the rankings change.

Kambala still comes first with a 70 per cent success rate, followed by Ascham (60 per cent), Baulkham Hills (58 per cent) and James Ruse (57 per cent). Selective schools North Sydney Boys, Sydney Girls and Hornsby Girls then enter the list, followed by Abbotsleigh, All Saints Grammar and Cranbrook.

Ms Walsh said this year’s crop of Kambala students were “very much known for being both very intrinsically motivated and assertive in sharing their opinions”, so their results were not a huge surprise.

The students say some of that success could be attributed to the steps the English department takes in encouraging students to think independently and develop their ideas through debate and collaboration.

At the end of each term, Kambala’s year 12 English classes are dissolved into specialist seminars where students can opt to take classes that will further their technical skills, such as building an argument, approaching critical readings, or writing in the discursive form

Alternatively, they could take a seminar to dive down a “rabbit hole” and explore a text’s marginal themes. This might, for example, involve investigating the representation of women in Henry IV, or the history of slavery represented in The Crucible.

“As teachers, we work out what is an area of interest for us, and ask the girls what workshops they’d like to attend. I think that choice makes them active participants in their learning process,” Ms Walsh said.

Teachers often also merged classes to debate texts among themselves, so the students could observe an exchange of ideas and see how different perspectives could be argued.

“By seeing teachers we very much respect and enjoy listening to engage with each other, we can mimic that in our engagement with other students,” said Lara. “That really cultivated a nice spirit where everyone shared ideas, shared notes and potential readings.”

Mayling said watching her teachers agree and disagree on ideas helped her form her own, while Anjalee said students “were always encouraged to read beyond the dominant reading of the text, whether that be a feminist lens or different critical lenses”.