Rapist, 39, is jailed after posing as taxi driver to attack woman

‘Jekyll and Hyde’ rapist, 39, is jailed for seven years after posing as taxi driver to attack woman who had been thrown out of nightclub for being sick

A Securitas patrol officer, described as a ‘Jekyll and Hyde’ character, has been jailed for seven years after he raped a woman in a deserted car park when she mistook his vehicle for a taxi.

Sola Warikwah, 39, attacked the victim in the back of his company car after she mistakenly got in thinking he was a cab driver who had come to collect her in London’s West End.

The woman was thrown out of a nightclub in east London for being sick before heading to Belgravia where she was sexually assaulted by Warikwah in the early hours of Easter Monday, April 22, 2019.

Warikwah worked as a security patrol manager for contractor Securitas and was tasked with visiting sites and patrolling areas of central London between 7pm and 7am each day.

After the 25 minute attack the victim, in her 20s, messaged a friend to say: ‘I’ve been raped. I feel sick. This taxi won’t take me home.’

She later managed to get out of the car and took photographs of her assailant as he walked away. The defendant was arrested at his home two days after the attack.

Warikwah, wearing a blue shirt and turquoise face mask, bowed his head in the dock of Southwark Crown Court as the victim’s impact statement was read out. 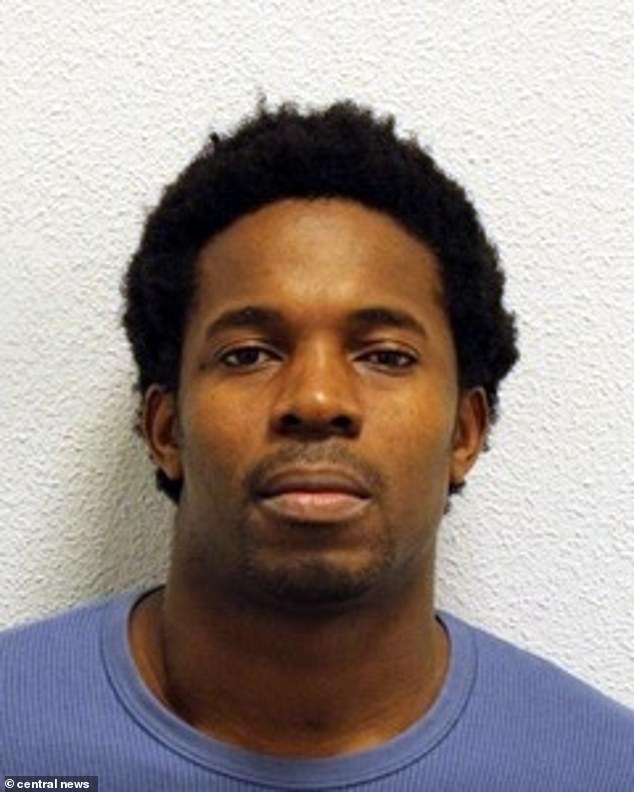 Sola Warikwah, pictured, has been jailed for seven years after he raped a woman in a deserted car park when she mistook his vehicle for a taxi after leaving a nightclub

He occasionally glanced at his younger sister, who sat in the public gallery to support him.

The woman said in her statement: ‘Since the attack my life has turned upside down. The battle I’ve had with mind and body since the assault is one the hardest challenges I’ve experienced in my life.

‘I was all about positivity and good energy. I used to be strong minded, but that seems like a distant memory.’

She said the attack led to ‘some of the darkest moments in my life and I still don’t know I’ll overcome it and be 100% the person who I was before.

‘I didn’t want to be in my own body, on bad days I still don’t. I’ve experienced suicidal thoughts.

She said she is ‘disconnected emotionally and physically’ and finds it ‘difficult to keep my mind strong and healthy.’

She said she had only been in her job for a month before the attack and has since found it ‘extremely difficult to hold it down with the trauma of what happened.’

The trial had been set for April but it delayed due to the pandemic, which she said ‘greatly exasperated’ her anxiety.

She is now receiving therapy but finds it ‘mentally exhausting.’

Judge Martin Griffith said the statement made ‘for sobering reading’ and told the sex attacker: ‘On the night of the 22 April you as an employee of a security company were driving your company vehicle through central London when you came across the victim who had far too much to drink, she had been put into an Uber by her friend.

‘She was ill in the cab as such she came out of the cab and the driver didn’t want to take her any further.

‘She was sitting on the pavement on the embankment near Temple tube station when you drove past and spotted her. 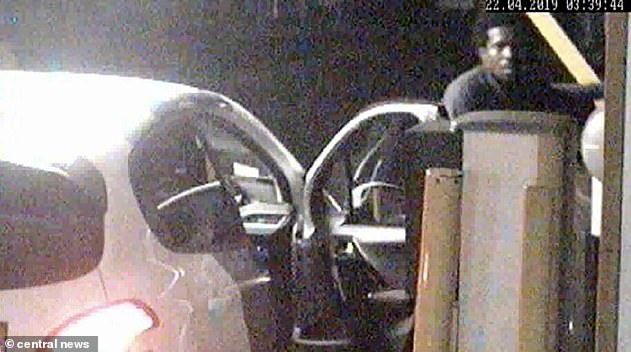 Sola Warikwah, 39, (pictured) attacked the victim in the back of his company car after she mistakenly got in thinking he was a taxi driver who had come to collect her in London’s West End

‘You stopped you crossed the road you went to talk to her she walked with you and you drove her off.

‘You drove her around as you visited sights as a part of your job, at one point you were seen on the CCTV to lock the vehicle in which she was inside, you went into the building to carry out your job.

‘There may have been some element of abduction but I’m not even sure she was aware of it.

‘Buy 3.14am you entered a car park, taking a taking a ticket although you had a permit to go into there, which would have recorded your presence in the car park.

‘You left at 3.39am, 25 minutes later, you lifted the barrier on your way out so there’s no record of you having been there.

‘The CCTV on the barriers recorded you and your vehicle.

‘In the 25 minutes you were inspired you raped her in a quiet part of the car park, you said because she asked you to, she said she woke up to find you were raping her.

‘Despite that you maintain she asked you, a man, for sex. She said it was painful.

‘Her friend met her and they went to the police, she described your victim as being a mess, screaming and crying down the phone.’

He said he agreed ‘wholeheatedly’ with the jury’s verdict.

‘She was suffering in the past from physical conditions which came back again as a result of this unsettling and distressing incident.

‘She had a great battle with what you have done to her. 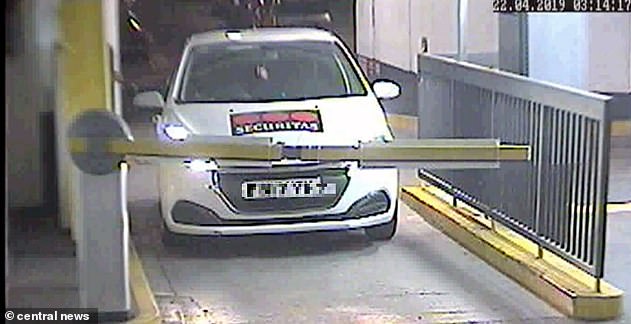 ‘There’s almost a Jekyll and Hyde part of you, the man who did what he did to that woman does not fit in with the man your friends and colleagues know. You are dangerous.’

Warikwah wailed in the dock as he was jailed for seven years.

Earlier his lawyer Tara McCarthy said: ‘He is quite a complex individual.

‘In December 2017 he witnessed a robbery, pursued the person involved and called the police.

‘In July 2017 he witnessed a handbag snatch and retrieved the handbag from the person and called the police.

She also said he had been the victim of domestic violence in previous relationships.

‘There have been reports where he has been the victim of domestic violence where he claimed his partner attacked him.’

The judge said his past record was ‘surprising’ but ‘in spite of those good things’ the people he helped were not ‘plastered at 2am on the side of the road.’

Warikwah, of Albyn Road, Deptford, denied but was convicted of one count of rape following a week-long trial at Southwark Crown Court in September.

He was sentenced to seven years in prison, banned from being a taxi driver or security guard on his release, and will be subject to an extended licence period of three years.

He was also registered for life as a sex offender and ordered not to seek or undertake employment which allows him to be driving any vehicle with any female other than a professional colleague or member of his immediate family.

‘Due to the courage and quick thinking of the victim, assistance from the public and the veracity of the investigation, a dangerous offender has been placed where he is no longer a threat to women.

‘I sincerely hope that the sentence handed down today encourages other victims of sexual offences to come forward.’