Is YOUR copy of Harry Potter worth £75,000? Printer’s error that shows whether book is ultra-rare first edition is revealed as copy of Philosopher’s Stone sells for magical sum

A rare Harry Potter first edition has sold for £75,000 at auction – more than double the asking price.

The book, Harry Potter and the Philosopher’s Stone, was being sold by an English ex-pat who originally bought it to help his children learn English growing up in Luxembourg.

It had been sat on a bookshelf for 21 years when the owner decided to check and see if it was a rare copy.

The book was subject to a furious bidding war at Hansons Auctioneers and was finally sold to a private international buyer for a hammer price of £60,000, rising to £75,000 with the buyer’s premium. 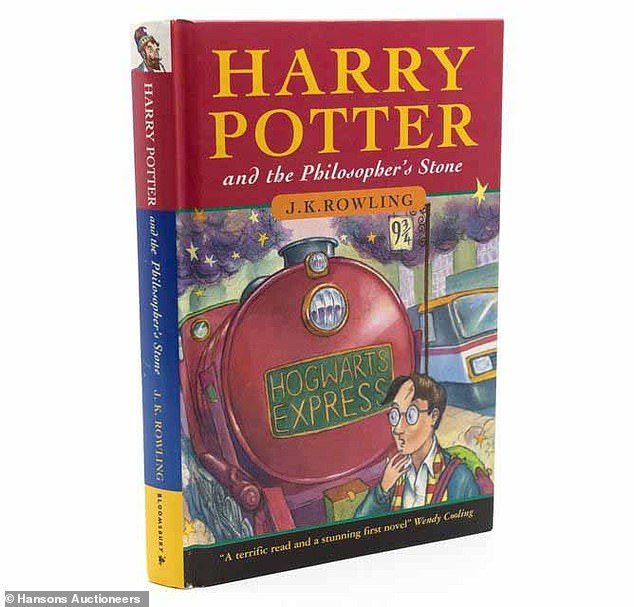 A rare first edition copy of Harry Potter and the Philosopher’s Stone has sold for £75,000 at auction – double its asking price following a dramatic bidding war

Auctioneer Charles Hanson declared during the sale: ‘This is the magic of Harry Potter.’

He described the book as a ‘Potter golden ticket’ and one of the most desirable first editions.

‘Wow, amazing result,’ he exclaimed at the final price. 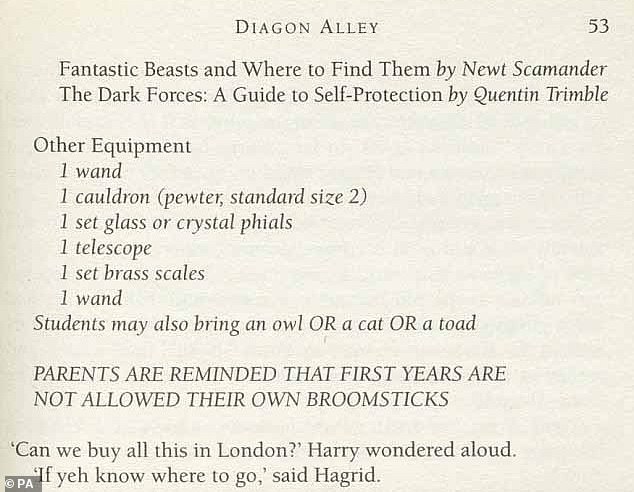 It had been sat on the anonymous selle’s bookshelf for 21 years when the owner decided to check and see if it was a rare copy. Pictured: A true first edition copy has a duplication of ‘1 wand’ on page 53 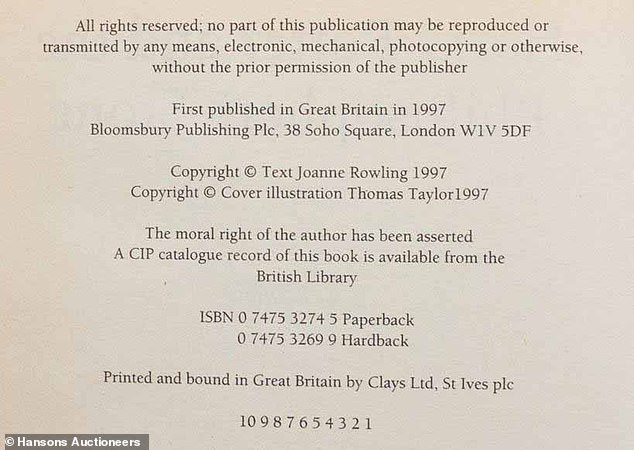 There are a number of way to determine whether it is a first edition copy of the Philosopher’s Stone, including the issue number on the copyright page reading ’10 9 8 7 6 5 4 3 2 1′

Only around 500 first edition copies of JK Rowling’s first Harry Potter novel were printed, with 300 sent to schools and libraries.

Like this anonymous seller’s copy, a true first edition is laden with a specific series of errors.

Past stating it is a ‘first edition, first impression’ from no later than 1997, the book will also have:

– ‘Philosopher’s’ is misspelled as ‘Philospher’s’ on the rear cover;

– ‘Witchcraft and Wizardry’ is incorrectly written ‘Wizardry and Witchcraft’ on the rear cover.

Some 500 first edition copies of the book were printed, 300 of which were sent to schools and libraries.

This book is one of the remaining 200, and the fourth to be found by Hansons Auctioneers’ book expert Jim Spencer in a year.

There are various ways to identify a Philosopher’s Stone first issue, published by Bloomsbury in 1997.

There is a well-known duplication of ‘1 wand’ in a list of items Harry Potter must take to Hogwarts on page 53.

There are a couple of misspellings in the book, including ‘Philospher’s’ on the rear cover.

The book, which would pave the way for JK Rowling’s Harry Potter to become a global success, arrived at the auction house wrapped in a tea towel.

The vendor, who asked to remain anonymous, said: ‘I was a big fan of the Potter books when I first read them.

‘There are a lot of ethical and human behaviour discussion points in the books and I had a lot of respect for JKR for producing such a polished and nuanced body of work.

‘I sent it to Hansons in a tea towel as a little nod to the Hogwarts house-elves, especially Winky and Dobby.’

The money from the sale will be used by the vendor to pay off his daughter’s student loan and help her apply for a mortgage.