Archaeologists are examining graves from prehistoric civilisations dating from the Bronze Age to the time of Genghis Khan at a site described as a real-life Atlantis.

Among the treasures found at the site are a “sleeping beauty” mummy, bronze and turquoise.

But in a matter of weeks, water will rise and submerge the site again, which will then freeze over.

There are fears damage to the site will worse as it once again disappears under the water, making it a race against time to save the treasures. 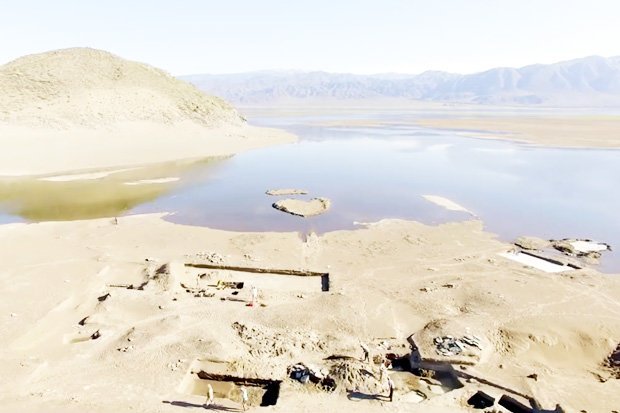 Dr Marina Kilunovskaya described the site as a sensation.

She said: “The site is a scientific sensation.

“We are incredibly lucky to have found these burials of rich Hun nomads that were not disturbed by grave robbers.”

“The site is a scientific sensation”

Other treasures from the underwater necropolis came from ancient China.

Turquoise beads used to decorate the belt, a set of much smaller purple beads, fragments of a belt’s ring made of copper alloy, a bone belt buckle with beautiful engraving and an iron knife with a ringed handle have also been unearthed.

Another mummy, the “weaver”, was buried with sparkling glass beads, two stone pendants and two belt buckets made of bone.

“It wasn’t a matriarchy, yet woman – mothers and skilled artisans – were treated with great respect.”

This extraordinary Atlantis site is in the mountainous Tuva Republic in southern Siberia, a favoured vacation destination for Russian president Vladimir Putin.