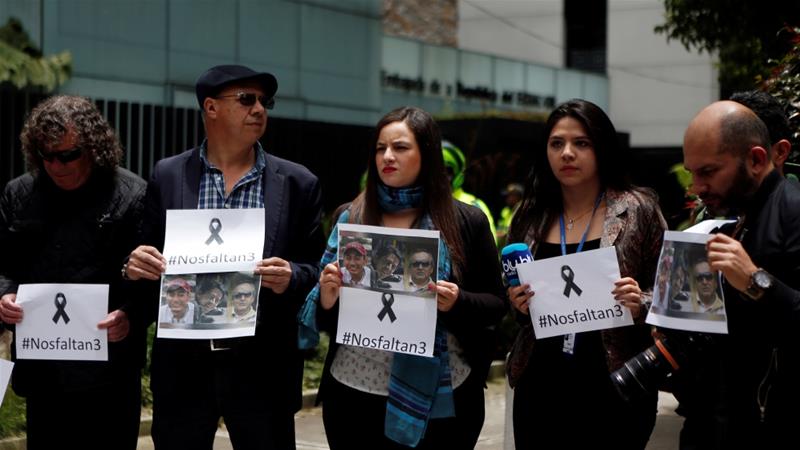 Ecuador’s government says it has received a video showing a couple taken hostage by a dissident rebel group operating on the country’s border with Colombia.

The announcement on Tuesday came five days after Ecuadorian authorities said that two kidnapped journalists and their driver were killed by former members of the rebel Revolutionary Armed Forces of Colombia (FARC) group who failed to demobilise in a landmark 2016 peace deal with Colombia’s government.

Cesar Navas, Ecuador’s interior minister, presented the “proof of life” video of the kidnapped couple at a news conference.

In the filmed footage, the man and the woman are shown tied up with ropes around their necks and hands.

They ask Ecuador’s President Lenin Moreno for help, while the man confirms they are Ecuadorian citizens, according to local reports.

Authorities have named them as Oscar Efren Villacis and Katty Vanesa Valesco, hailing from the northwest of Ecuador.

According to reports, they were travelling to the Ecuadorian province of Esmeraldas bordering Colombia. Navas said they were abducted either on Wednesday night or Thursday morning.

The minister also said that the video was received “via a communication channel” with Guacho, an ex-FARC rebel, whose real name is Walter Artizala.

Two years ago, the peace accord signed by Colombia’s government and the FARC ended half a century of civil war in which 220,000 people died and millions were displaced.

At the time, Guacho broke away from the FARC to form a new splinter group, known as Oliver Sinisterra Front.

According to reports, Guacho has since led a group of up to 80 fighters on the border between Ecuador and Colombia.

Two weeks after their kidnapping, the group released a statement to say all three had died.

Subsequently, both Colombia and Ecuador increased their military presence in search of the members of the group.

A number of members of the group are reported to have been arrested in the process.

The group requested the release of the detained fighters in return for freeing the abducted couple, local media quoted Navas as saying.

“What’s really important to note is that the government has completely failed to occupy the areas that FARC did,” said Pete Watson, an academic at Sheffield University specialising in nation-building in Colombia.

“The failure of the government to go in and oppose their law and order – and to establish a presence is one of the reasons why we are seeing these things occurring,” he told Al Jazeera.

Ecuadorian authorities are now offering $100,000 for information on Guacho.

“There haven’t been too many kidnappings [recently], but it’s important to note that these are trafficking routes,” Watson told Al Jazeera.

Watson told Al Jazeera there is a difference an ideological difference between FARC and new splinter-groups such as Oliver Sinisterra Front.

“I think what’s very important is that these FARC splinter groups are not really politically minded. FARC obviously talk a lot about their political aims – that’s what they were originally supposed to do.

“They had a very social, rural, land kind of focus – very left wing. These splinter groups aren’t really much more than BACRIM – bandas criminales (criminal networks) – that are really part of the drug trafficking new networks that have grown up.”

Recently efforts have been made to bring in other Colombian groups into the peace process, most notably the ELN – another leftist rebel group.

“The ELN and the government have been working towards a new bilateral ceasefire and there are negotiations going on in Quito,” Watson said

“This dissident group doesn’t have much to do with the ELN. The ELN itself has been quite responsible for damaging the talks in Quito. There have been varying attacks by the ELN, particularly in Barranquilla.”

With reporting by Bala Chambers