Regional communities on edge as outbreak spreads from Melbourne

Residents in the border town of Mildura have rushed to get tested after the regional centre recorded its first coronavirus case in 15 months, sparking concern for the local Indigenous community and other vulnerable people yet to be vaccinated.

Mildura became the third regional area to record new cases connected to the current outbreak after cases were detected in Barwon Heads and on Phillip Island, prompting the state government to cast doubt on an early end to the lockdown for regional Victoria.

The number of exposure sites at Phillip Island grew to more than 20 on Sunday, after a group of friends visited for several days last week. Two of them later tested positive for COVID-19. A primary close contact of one of them tested positive on Saturday. 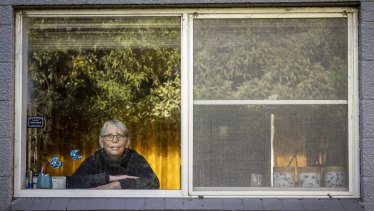 On the opposite side of the state, Mildura was on edge after a local man in his 30s tested positive for the virus in the early hours of Sunday.

The man was at the MCG Carlton-Geelong match in the MCC members’ area, and was part of a group of three household members who travelled to the game. He went to the emergency department at Mildura Base Hospital, where he remained on Sunday.

Mildura mayor Jason Modica said it had been 15 months since a case had been detected in the regional centre, which is 540 kilometres north-west of Melbourne, and the community was in shock.

“[The community is] probably a bit deflated,” he said. “We have had that geographic buffer, the thing that has helped the most in us not having a case for 15 months.”

While Cr Modica said vaccination rates in the area were close to the Australian average, the uptake had “waved and waned”. About 55,000 people live in the region, with more than 32,000 in Mildura.

“It’s a big rural town, hence the need to get the data in and make sure we know as much as we can and proceed from there,” he said.

While Cr Modica, along with other border communities, has been pushing for a more “nuanced” version of lockdown for regional areas, he said he understood restrictions needed to be in place when there was a case in the community.

Jacki Turfrey, the chief executive of Mallee District Aboriginal Services, said an outbreak would have serious consequences for the local Aboriginal community.

At 6702, the Loddon Mallee region’s Aboriginal population of 6702 is about 14 per cent of Victoria’s total.

“We do have a high percentage of people up here who are Aboriginal and Torres Strait Islander, so it means we have a fairly vulnerable population more generally.

“I’m really concerned about Aboriginal community members who have not been vaccinated yet and the risk it puts them in.”

The vaccine uptake increased during the most recent lockdown, and Ms Turfrey said she wouldn’t be surprised to see the new case drive another rise in jabs. But she said the changing advice for the AstraZeneca vaccine had created uncertainty.

“We had a really good uptake with AstraZeneca, a massive uptake, which is great,” she said. “The only issue was with conflicting messages about AstraZeneca … it’s just died off completely. People are really scared to come and get that vaccine.

Mildura resident Nikkita, who did not want to give her surname, said the case could act as a wake-up call to many people in the community.

“I think there was a sense of complacency here in Mildura, but now I think this will be a big wake-up call to the community that obviously we are not immune to this sort of thing because we are so far away from Melbourne,” she said. 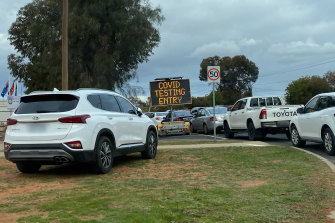 Queues at the testing clinic in Mildura on Sunday afternoon.

She said most people had been wearing masks, but many had not been checking in with QR codes as often as they should. She said a testing centre had been set up near her home on Sunday and there was already a long line.

“A lot of people in the community are going to get tested, which is so good to see,” she said. “Mildura has such a strong sense of community; everyone is going out and getting tested and doing the right thing.”

On Sunday, Premier Daniel Andrews cast doubt on an early end to lockdown for regional areas and said the Mildura case had shown how quickly the virus could spread.

“It is not the day for us to be announcing parts of regional Victoria being let out of this lockdown … that just confirms I think for all of us, if we needed any, that this moves quick and a problem anywhere becomes a problem everywhere,” he said.

“I know it is incredibly frustrating for people who are a long way from Melbourne, but that virus can reach you, as we can see with this Mildura case … From a virus point of view, the state is a lot smaller than it might seem.”

Phillip Island local Faye Redmond said on Sunday there was an eerie feeling in town. On Saturday, men in hazmat suits went in and out of shops on the main street of Cowes, as traffic backed up for kilometres, with locals waiting to be tested.

“It is a bit scary,” Ms Redmond said. “I have been feeling perfectly fine until now. Yesterday I got a touch of nerves – it’s got a bit real.

“So far we haven’t seen any cases, but we do think that there probably will be considering those people were here for a number of days … Hopefully, we won’t get an outbreak, but that’s obviously what everyone’s worried about.”

The 65-year-old, who has lived on the island for 25 years, has a compromised immune system and lives alone. She said she had been heartened by the support she had received from the community. 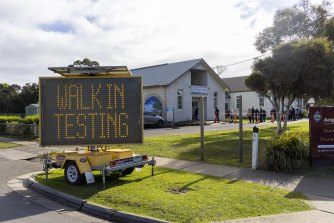 A walk-in testing clinic has been set up in Cowes on Phillip Island. Credit:Wayne Taylor

Geoff Moed, owner of A Maze’N Things fun park on Phillip Island, said the community was on edge.

“There has been a huge contrast – the two weeks of school holidays for A Maze’N Things was the best July school holidays we have ever had. We were getting great local support and lots of people coming,” he said.

“From that perspective it was a positive outlook, but when you bring this in, it’s particularly hard on business owners and staff. Every time we are locked down the sense of despondency gets a little bit deeper.“

Barwon Heads Primary School, on the Bellarine Peninsula, closed several days ago after a teacher tested positive. Forty-nine staff and 527 students at the school have been identified as either primary or secondary close contacts.

Greater Geelong mayor Stephanie Asher said on Sunday the situation was different compared with the most recent lockdown because there were active cases in the region and exposure sites in Barwon Heads and Waurn Ponds.

“The next couple of days will be critical for our region,” she said. “The best scenario is that the outbreak is brought under control statewide, including in Melbourne, and we can all move out of lockdown together.”