Who’s ready to get arrested? Reporter goes undercover with the eco-activist group Extinction Rebellion – and finds they are as ruthlessly professional as they are deluded

I’m sitting in a cavernous community hall in East London with a group of eco-activists huddled in thick jackets against the cold.

We’re being drilled for our arrest – like soldiers being trained for capture and interrogation by the enemy.

Our tutor is a sixtysomething woman with fuzzy white hair who knows all about civil disobedience and its legal consequences.

She explains passionately that we must not speak to the police, other than to give our name and date of birth.

We must not get drunk before the ‘action’ in just a few days’ time.

And we should consider wearing adult nappies – in case we’re locked up for hours in a police van with no access to a lavatory. Or if we decide to chain ourselves to railings, barriers or whatever else to cause maximum disruption.

To achieve this, they are planning an onslaught of civil disobedience on a scale rarely seen in this country. And I’m here undercover as a new recruit, or ‘rebel’ as they call it.

My induction took place late last month in an anonymous office block near Euston station. I’m told XR was given the space for free by a well-placed sympathiser.

A lift takes me to the fourth floor – an open-plan space with a smattering of desks and some 40 new recruits, an even mix of male and female, all casually dressed.

A handmade poster by the lifts is daubed ‘Eco not Ego’. A large sign warns us to avoid ‘suppression juice’ – that’s alcohol – so we can ‘rebel with a clear body and mind’. Brightly coloured banners hang from the ceiling – ‘No Brexit in a dead planet’, says one – while a giant papier-mâché skeleton of some big beast lies, under construction, in the corner.

This introductory meeting is led by a bearded XR activist called Greg, who lives in a squat in West London with other members of the group. His first move is to lead us in an awkward ‘ice breaker’. Sitting in rows on school chairs, we’re instructed to stick both arms in the air and waggle from side to side, chanting ‘woo-hoo’. 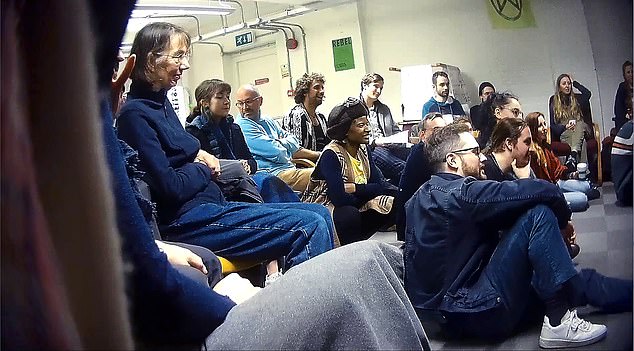 Preparing for action: A photo of an XR meeting taken by our undercover reporter. There is no suggestion those pictured are all intending to break the law

Then comes a minute’s silence for ‘the dying planet’. Struggling not to laugh, I bowed my head with the others, eyes down.

‘Devote some of your brain to imagining the kind of world you want to create,’ says Greg. ‘To get through this struggle together, we need to hold tight to our dream.’

We’re asked to think of one word to describe the world we want – and shouts of ‘harmony’, ‘sharing’ and ‘green’ come from around the room. ‘Courageous’, mutters a boy in a long beige trench coat sitting next to me.

A charity worker with short blonde hair says she is worried about XR’s policy of deliberately getting arrested.

Not that she’s against breaking the law – just that it might deter volunteers who cannot take the risk of getting into trouble.

Eating her dinner from a Tupperware box, another young woman raises concerns about XR’s links to Labour’s hard-Left Momentum faction. George agrees XR and Momentum have a good relationship. 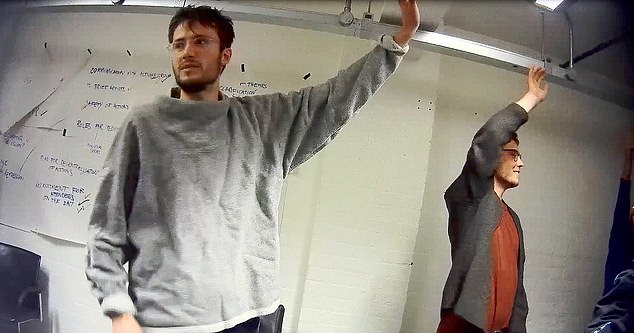 Then we are told to get in a long line, arranged in order of willingness to get arrested. It is time to hone our tactics and strategy for the forthcoming ‘rebellion week’ – which starts tomorrow.

‘Move around the room according to what you feel,’ says Naomi, one of the lead activists.

‘The question is this: how arrestable are you in XR?’

A handful immediately place themselves at one end of the room, the extreme that signifies: ‘Yes, I really wish to be arrested right now.’ A few walk to the opposite side, meaning: ‘Absolutely not.’ 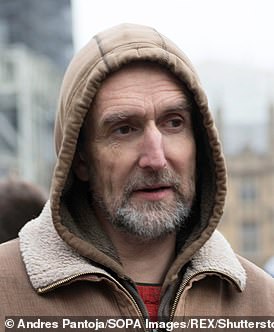 The most prominent – and radical – of the XR leaders is failed organic farmer and PhD student Roger Hallam.

After years in a succession of Left-wing groups, the 52-year-old says the ‘name of the game’ for XR is to ‘bring down all the regimes in the world and replace them’. Hallam (above) says paralysing traffic will eventually cause food shortages and trigger uprisings.

In a recent interview, he said XR protesters should be ready to cause disruption through personal ‘sacrifice’. If necessary, they ‘should be willing to die’. 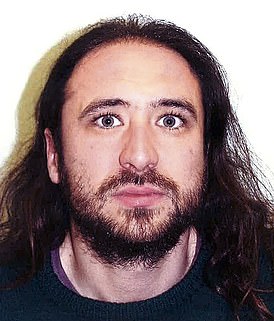 XR co-founder Stuart Basden, 36, a middle-class writer from Bristol (above), has goals that go way beyond a desire to curb global warming.

Indeed, he has claimed: ‘XR isn’t about the climate. You see, the climate’s breakdown is a symptom of a toxic system that has infected the ways we relate to each other as humans and to all life.’ 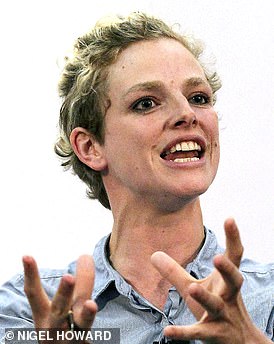 Tasmin Osmond, 35, is a veteran of ‘direct actions’

Tasmin Osmond, 35, is a veteran of ‘direct actions’ which had little to do with climate change, such as Occupy London, the poverty protest which set up a camp outside St Paul’s cathedral in 2011.

The granddaughter of Dorset baronet Sir Thomas Lees, Omond (above) went to Westminster School and Trinity College, Cambridge, where she read English.

She was thrown out of anti-aviation group Plane Stupid after saying the green movement ‘brand’ was ‘unwashed, unshaven and up a tree’, and this ‘doesn’t represent me’. 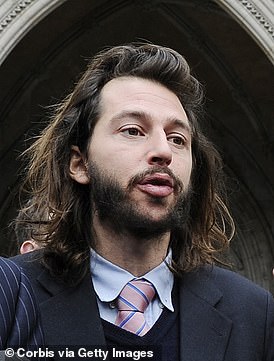 George Barda, 43, believes the ‘Criminal UK Government’ is to blame for climate change

George Barda, 43, believes the ‘Criminal UK Government’ is to blame for climate change.

A post-graduate student at prestigious King’s College in London, the son of classical music and stage photographer Clive Barda still finds time to be a dedicated revolutionary and camped outside St Paul’s cathedral in the Occupy London campaign.

I’m with the majority shuffling around in the middle amid embarrassed laughter. This position says: ‘Maybe, let’s think about it.’

They ask us how far we’ll go. Will we commit a litany of protest crimes – smashing windows, defacing buildings? Will we glue ourselves to doors or block roads using ‘swarming’ – sitting down for a few minutes at a time to stop traffic?

‘I’m comfortable with spray paint that permanently damages but not breaking windows,’ states a woman in her 30s from a refugee charity.

‘I’m somewhere between the permanent spray paint and the chalk spray paint,’ says a man studying for a PhD in environmental activism. ‘They can’t charge you with criminal damage if you use chalk paint.’

After an hour or so, we’re all split up into what they call ‘affinity’ groups based on how radical they judge us to be. They don’t seem to think I’m very revolutionary.

Roles are assigned for the forthcoming ‘action’. Our group has a ‘wellbeing co-ordinator’, a ‘legal observer’ and a ‘media organiser’.

How far would we go for the movement? A Scottish actress in her 20s tells us she’s planning to recruit her mother. ‘I think I’d be OK with being arrested,’ she adds. ‘It’s just that I’m so in and out of the country, I work between here and Paris. I don’t know if I would be able to make my court date, so I don’t know if it would work out.’

Another young woman, a university student, says she’ll bring her harp along to keep us entertained during ‘rebellion week’. Before the meeting breaks up, the organisers call for mature women willing to be trained as ‘de-escalators’.

These are the people asked to calm down frustrated members of the public, particularly drivers, trapped in the traffic jams we’re going to cause.

Then the evening comes to a conclusion with repeated chants of ‘Extinction… Rebellion’ from the hardened activists, who then treat us to an impromptu and utterly excruciating dance.

A beat box starts blaring, one long-haired man sways expansively, arms waving out of time, the others jig about. I leave, armed with XR stickers and posters to plaster on the streets.

The group gives me constant updates through the WhatsApp messaging system, and a few days later I’m back in the office block for another training session. This time, it’s altogether more alarming.

An activist in her 20s called Jess lays out XR’s terrifying vision of the future: ‘We want to build a structure, a community and test prototypes for the coming structural collapse of the regimes of Western democracies. And we see this as inevitable – this has to happen.’

Now, we’re drawn further into the plans for illegal protest, and made to take part in role-play scenarios of activists clashing with the police.

The golden rule is to stay silent when confronted by police – unless we quote from a self-righteous prepared statement outlining our supposed right to break the law as a ‘conscientious protector’ of Planet Earth.

And we must never, ever identify any of the XR organisers in case they are charged with inciting illegal activities.

Activists who plan to ‘lock on’ by super-gluing themselves to public property are warned to expect a long wait, as few police officers are trained to dissolve the glue.

The hope is to cause the maximum amount of chaos. They might even have activists locked on at five separate protest points in London. If we are seized by the police, we must make our bodies go floppy, to tie up more officers as they attempt to carry us away.

I endure a further marathon training session at a climbing centre in North London.

We’re being addressed by the white-haired lady, who I now know is press officer Jayne Forbes. Stating her own readiness for martyrdom and jail, she tells us that: ‘I’m an older person with no responsibilities.

‘I’m prepared to go to prison and I think we are privileged in this country to have prisons that are relatively acceptable.

‘If I was living in Brazil or something, I could get killed as an activist. Our prisons are not bad compared to many in the world.’

She tells us never to agree to a caution because that would be ‘an admission of guilt’.

We must never accept the help of a duty solicitor because they would be ‘pally with the police’. I’m learning a great deal.

We’re advised only to bring an old-fashioned ‘burner’ mobile phone to the protest in case the police want to seize the device as evidence.

I’m told a paperback will help me while away the long hours in a police cell – and that I can ask for up to three blankets from the custody officers.

I now have a list of ‘friendly’ solicitors on a small sheet of paper reminding me of my legal rights. Can we get vegan food in prison? XR thinks the answer is ‘yes’.

By the time I say my goodbyes, I’m truly worried. If this week goes according to plan for Extinction Rebellion, I know that many of its members will be only too delighted to learn first-hand about the inside of our police cells and our prisons – believing they have come one step closer to making their dangerous plan a reality.