The former Thai Navy SEAL whose death cast a sad shadow on the extraordinary rescue of 12 boys and their soccer coach from the flooded Tham Luang cave over the past week was farewelled for the last time in his home province on Saturday.

Saman Gunan, 37, had joined the rescue effort as a volunteer, taking time off from his job as an airport security officer. He lost consciousness in the cave in the early hours of Friday while returning used oxygen tanks, before the ambitious evacuation of the 13 began on Sunday.

When news of his death broke, the Thai king said Saman would have a funeral with full honours.

Hours before his funeral and cremation on Saturday, the king bestowed on the retired SEAL the rank of Lieutenant Commander in his appreciation for his sacrifice as well as the royal decoration of Knight Grand Cross (first class) of the Most Exalted Order of the White Elephant.

A crematorium constructed especially for the funeral was completed on Tuesday, according to Khaosod English.

Athikarn-um Angsusilo, a travelling monk who set up the crematorium in Roi Et, said he was "honoured and proud" to be part of his funeral. 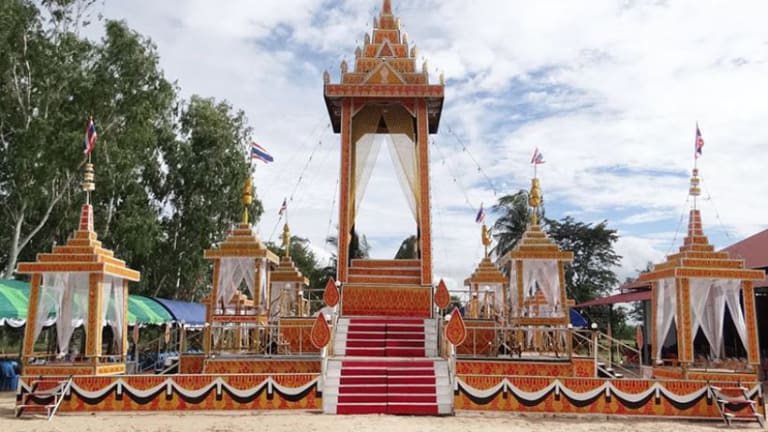 The crematorium erected for the funeral of Saman Gunan.

"He went to help but had to give his life … I feel honored and proud to be a part of his cremation, to honor the Hero of Tham Luang Khun Nam Nang Non."

While the cremation was held on Saturday, Saman's body had already been on a long journey since it was recovered from the cave the previous Friday.

After his death on the Friday, Saman's body was transported via defence convoy from Chiang Rai to Mae Fah Luang airport in a coffin draped with the Thai national flag, The Bangkok Post reports.

Around 100 officials observed 10 minutes of silence as the coffin was moved to a Royal Thai Navy plane. The body was then flown to the Navy base at Chon Buri, south of Bangkok.

A royal bathing rite and chanting ceremony followed at nearby temple Wat Sattahip.

Saman's body then made its final journey to his home province of Roi Et, in Thailand's east. Nightly memorials at Wat Nong Khu temple were followed by a lengthy funeral culminating in his cremation on Saturday afternoon.

Saman's death inspired an outpouring of sadness and gratitude on social media amid celebrations that followed the successful rescue of the children.

Earlier in the week, Saman was remembered by his widow Waleeporn Gunan as a "hero" who loved helping others, doing charity work and "getting things done". She told the BBC Saman had once said "we never never know when we will die, we can't control that" and so "we need to cherish every day".

Her pride in her husband helped her deal with her sorrow at losing him, she said.

Wichai Gunan, Saman's father, reportedly collapsed in grief when he heard the news last week. He told the BBC he was proud of his son, but sad.