Retirement village manager is filmed stealing money from a pensioner

A retirement village manager has been jailed for 27 months after he was caught on CCTV rummaging through a dying pensioners drawers before stealing money.

Adam Brooks, 33, loaded Jackie White into an ambulance just minutes before he searched through her room for valuables, a judge at Northampton Crown Court heard.

The 83-year-old was taken to Northampton General after falling in her room at the luxurious Hawthorns retirement village on August 25 last year.

Just hours after handing the widower, who was in a serious condition, over to paramedics, Brooks had gained unauthorised access to her room and stolen money from her. 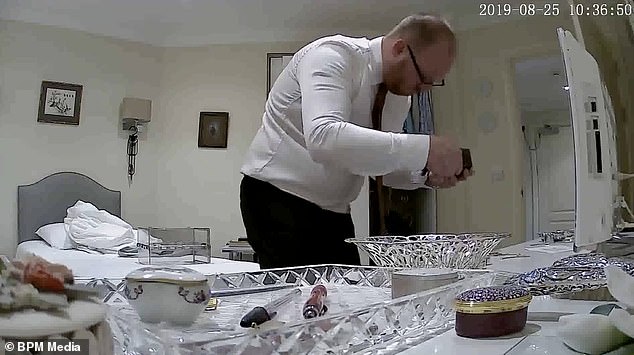 Adam Brooks (pictured), 33, loaded Jackie White into an ambulance just minutes before he searched through her room for valuables, a judge at Northampton Crown Court heard

Her family, who have been devastated by her death and the crime committed during her final hours, released the video footage they watched while keeping a vigil by her bedside.

In it he can be seen going through her jewellery box and checking a number of drawers.

Sons Kevin and Martin and daughter Susan Hoyle were in court today to watch Brooks sent to jail.

Martin had only installed the CCTV days before his mother’s death to keep an eye on her safety after she was diagnosed with early onset dementia.

He decided to watch the CCTV to find out how his mother had fallen. He couldn’t believe what he was witnessing as he saw Brooks walk into her room and then calmly search the drawers. 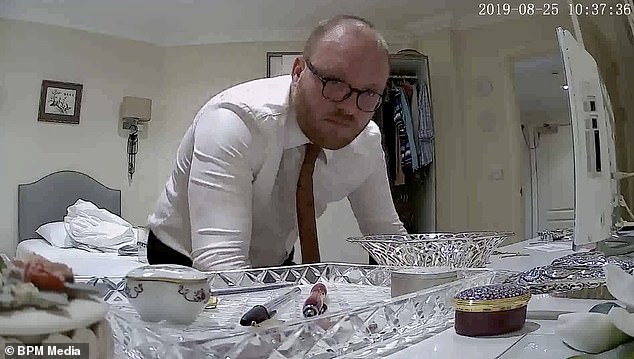 Just hours after handing the widower, who was in a serious condition, over to paramedics, Brooks had gained unauthorised access to her room and stolen money from her

After a few minutes Brooks noticed he was being filmed, obstructed the camera and left the room.

A few hours later the great-grandmother, who had been honoured by the Queen with an MBE in 1993 for her charity work, had died.

It meant just hours after her death the family were talking to police instead of taking time to grieve.

In the months since, family members had to have counselling to cope.

Martin White’s victim statement was read out today in court. He said: ‘It is hard to describe the absolute shock and horror I felt when I saw Adam calmly burglarising my mother’s flat less than two hours after he had watched her being carried out of it by the ambulance crew. 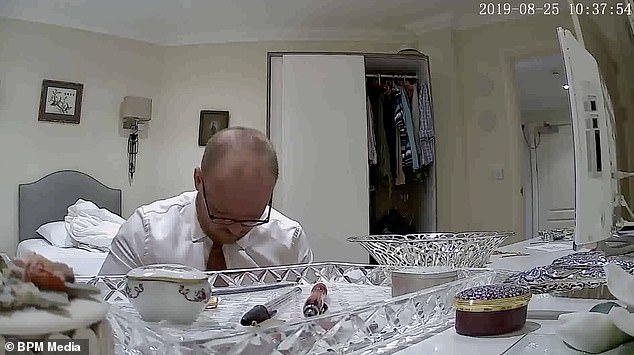 ‘My sister did not believe me when I said what I was seeing. The last two hours of my mother’s life were spent with the family in absolute shock as we watched the video and tried to make sense of what we had seen rather than us quietly saying goodbye to her.

‘We were told by the medical staff that one of the last things to go is hearing and I pray and worry still whether my mother was aware of what was happening in that room at the end.

‘We all had a great deal of difficulty coming to terms with the fact that someone who was considered a friend could take advantage of us all in the cool, calm and collected manner that showed on the CCTV.

‘It did not appear to us that he was at all uncomfortable with what he was doing.’