Rome: If, as it’s said, all roads lead to Rome, then they intersect at Piazza Venezia, the downtown hub of the Italian capital, watched over by a traffic officer on a pedestal who choreographs streamlined circulation out of automotive chaos.

For many Romans and tourists alike, those traffic controllers are as much a symbol of the Eternal City as the Colosseum or the Pantheon.

That may explain why the return this past week of the pedestal (plus its traffic cop) after a yearlong hiatus while the piazza was being paved, set off a media frenzy — even if there was little traffic to direct given the widespread lockdown that began this past week to contain an upsurge of coronavirus cases. 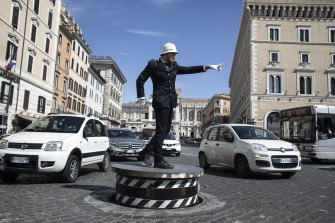 “In this difficult period, I think that it was seen as a sign of something returning to normal,” said Fabio Grillo, 53, who, with 16 years under his belt, is the senior member of the team of four or five municipal police officers who direct traffic from the Piazza Venezia pedestal.

In rain or sleet, or sweltering through Rome’s sultry summers, officers have directed traffic from the Piazza Venezia pedestal near the mouth of the Via del Corso, one of Rome’s main streets, for as long as anyone can remember. And the gestures they make with their white-gloved hands is something that all Italian motorists dutifully memorise for their driver’s tests. (Important note: Two hands straight out with palms facing motorists is equivalent to a red light.)

“It’s been compared to conducting an orchestra,” said Grillo.

Apart from regular traffic, Piazza Venezia is also a crossroads that leads to City Hall, the Parliament, Italy’s presidential palace and a national monument where visiting heads of state routinely pay homage — which all contributes to the chaos at the hub. 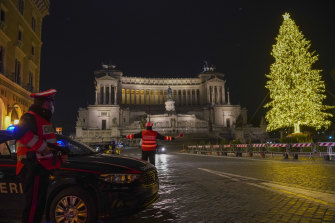 “This piazza is the aortic epicentre of the country,” said Angelo Gallicchio, 62, who has managed a newspaper kiosk in the square since 1979. “Every person of note who comes to Rome has to pass through Piazza Venezia — you can’t avoid it.”

For many years, traffic police were instructed by Mario Buffone, whose three decades on the pedestal — making him one of the city’s most recognisable figures — were immortalised in a book. He retired in 2007. “He was an icon for us,” said Grillo.

Giuseppe Battisti, 47, an officer who has been on the pedestal for 12 years, said all that’s required to do the job well is passion and “a little elegance.” Although the traffic signals are enshrined in the driver’s code of conduct, “every agent personalises it,” he said.

Pierluigi Marchionne’s elegance on the pedestal — his gestures earned him a “He’s bellissimo! It’s marvellous!” from a passerby on Thursday — is likely what grabbed Woody Allen’s eye when he was scouting locations for his 2012 movie To Rome with Love. After seeing Marchionne in action, he was so taken with the traffic officer that he rewrote the beginning of his script so that he could cast him in the movie, Marchionne said.

“He saw me, and then we did a screen test, but let’s say he’d already chosen me for the role,” said Marchionne, 45, who went on to take courses at the Actor’s Studio in New York and still occasionally directs traffic from the pedestal. He is also the artistic director of a production company that organizes an Italian film festival under the stage name Pierre Marchionne.

Working on Allen’s film “was a unique experience,” he said.

It’s notable that Romans in particular should feel so friendly toward someone paid to punish traffic infractions, which are notoriously frequent in this city.

Until the 1970s, every January 6, the feast day of Epiphany, Italians would express their gratitude to the officers by covering traffic pedestals with gifts. The loot was then given to charity, Grillo said. 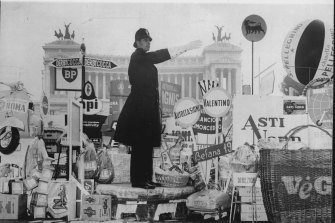 A traffic policeman on duty in the Piazza Venezia, Rome, in 1962, surrounded by New Year gifts from grateful motorists and pedestrians.Credit:Sport & General Press Agency

That unlikely affection may have had much to do with Alberto Sordi, an actor who frequently played traffic officers in movies, most notably in the 1960 classic Il Vigile.

Sordi, who died in 2003, was also named an honorary Roman traffic officer. Last year, the uniform and props from these films went on display in a museum opened in the actor’s home in Rome, now shut because of the pandemic.

“Because of Sordi, traffic cops became more simpatico,” as well as a symbol of Rome, said Grillo, who can recite scenes from Sordi movies word for word.

That affection for these officers has not been without some criticism, however. The image of the municipal police, of which the traffic officers are a part, has been tarnished in recent years by investigations into possible wrongdoing — such as closing an eye to illegal construction and taking kickbacks.

A history of municipal police forces in Italy posted on the website of one national association traces their origins to the guardians of a Roman temple in fifth century BC An educational film from the early 1950s from Italy’s national archive, Istituto Luce, however, instead traces the corps’ history to first century BC, during the reign of the Emperor Augustus. (There’s a nice touch of a chariot segueing into a convertible.)

Today, Piazza Venezia has the only traffic pedestal left in the city. “It is part of the architecture of the piazza,” said Gallicchio, the kiosk owner.

At first, the pedestals were made of wood, and traffic officers would carry them into crossings.

At one point, a fixed, cement pedestal was installed in the piazza, lit up by a spotlight on a nearby building at night when no officer was on duty, Gallicchio said.

The spotlight didn’t help as “motorists kept smashing into it,” Grillo said. So in 2006 it was replaced with a mechanical pedestal that rises from the paving stones to welcome officers arriving for work.

Now, with the work done on the piazza this year, the officers say they are keen to get back to a job they love and, hopefully, to become a focus of tourists’ cameras again after the pandemic passes.

“Maybe we weren’t as famous as the Fountain of Trevi, but we were a tourist attraction.” Battisti said, smiling. “I bet there are even photos of us in North Korea.”