Revealed: How David Cameron sent lobbying emails to NHS chief who used to work for him saying ‘UK’s leading fintech firm’ Greensill should get contracts

Emails sent by David Cameron lobbying on behalf of Greensill Capital were revealed for the first time today.

At the height of the pandemic in April last year, the former PM sent a message to Matthew Gould, head of NHSX, the health service’s digital arm.

Mr Cameron urged Mr Gould, who worked for him in government, to consider using Greensill’s services, describing it as ‘the UK’s leading fintech firm’, according to the Sunday Times. The lender fell into administration last month.

He said it was ‘one of the businesses I now work with’ and pointed out its Earnd app was being piloted in several NHS trusts.

He also offered to introduce Mr Gould to Bill Crothers, previously one of Britain’s most senior civil servants who, it emerged last week, took a job with Greensill while working in Whitehall.

The email will further inflame the lobbying storm rocking Westminster, and raises further questions for Matt Hancock, as Mr Cameron wrote to Mr Gould to say that the Health Secretary was ‘extremely positive about this innovative offer’.

Last week it emerged Mr Hancock met Mr Cameron and Mr Greensill for a ‘private drink’ in 2019 to discuss a new payment scheme for the NHS.

Mr Cameron has insisted he broke no rules in contacting ministers and officials – also including Chancellor Rishi Sunak – but has conceded that in hindsight he should have made approaches in a more ‘formal’ way.

A network of Labour Party ‘spies’ is operating at the heart of Whitehall, feeding secret information to Sir Keir Starmer’s team to destabilise the Government, senior Tory sources claim.

The moles – Labour-sympathising civil servants – are believed to have played a key role in triggering the lobbying scandal which has allowed Sir Keir’s party to construct a narrative of ‘Tory sleaze’ by leaking details of David Cameron’s contacts with Ministers and officials.

They are also suspected of using leaks to try to ‘sabotage’ the Brexit withdrawal negotiations last year, and to provide advance notice to the Labour leader about Government policies in the pipeline – giving him time to structure his responses.

The Tory spy-hunters believe a ‘cell’ of Labour supporters, centred on the Cabinet Office, was activated last year after Dominic Cummings, Mr Johnson’s former senior adviser in No 10, declared that a ‘hard rain’ was coming for the Civil Service as part of planned reforms to break up Whitehall’s grip on the establishment.

Mr Cummings is a long-standing critic of the Whitehall establishment, describing the permanent Civil Service as ‘an idea for the history books’ and proposing the abolition of senior civil servants’ roles.

The 2020 email to Mr Gould read: ‘Greensill have recently launched a digital solution (recently rebranded from Greensill Pay to Earnd) which helps with one of the SOS’s [Secretary of State’s] and your key priorities: helping all NHS employees’ welfare, morale, and wellbeing.’

The former Prime Minister asked NHSX to grant it access to the data of NHS employees.

Within months, Earnd announced a partnership to deliver rapid payment to up to half a million NHS staff, having secured deals to get access to the sought-after data.

A spokesman for Mr Cameron told the Sunday Times: ‘These discussions were about the mechanics to ensure Earnd was delivered for NHS workers in an efficient way.’

Environment Secretary George Eustice – a former press secretary for Mr Cameron – today insisted his old boss had not broken any rules or ‘taken advantage’ of the arrangements.

‘Well look, he himself has said that with hindsight it probably would have been better if, rather than texting ministers, if he had instead written letters to set out his views more formally,’ Mr Eustice said.

‘But I think the real point is. ‘has he done anything wrong?’ Well, on the face of it, no. There’s a review that is going on, we mustn’t prejudge that.’

Pushed on whether Mr Cameron exploited the rules, Mr Eustice added: ‘I don’t think he took advantage of any rules, no. He meticulously observed the rules there that he himself actually put in place after some concerns around lobbying a decade ago.

‘He put in place these restrictions on what ministers can do for a period of two years.

Mr Eustice said the Government would be looking at whether changes were required – but insisted the current system for declaring interests was ‘pretty good’.

He told Sky News’ Ridge On Sunday: ‘I think the right thing is for these reviews to go through their process, to conclude, to work out exactly what did and what did not happen and then yes, of course there may come a time after that when it is right to consider tweaks to policy.

‘But fundamentally, I think the systems we have in place with ministers declaring interests with the ministerial code and the focus on that and how ministers conduct themselves in office is actually a pretty good one.

Boris Johnson was today warned failure to tackle the ‘shameful’ lobbying storm could cost him votes as a crucial round of elections loom.

Senior Tory Sir Bernard Jenkin appealed for the PM to get a grip after a slew of revelations in the wake of Greensill Capital’s collapse into administration.

Unless he is more ‘transparent’ the row could hit the ‘Red Wall’ support that delivered Mr Johnson’s historic 2019 majority, Sir Bernard said.

The scale of damage could become clear within weeks, with a wave of elections on May 6 including councils, mayors and a by-election in Hartlepool – a seat traditionally held by Labour but within the grasp of the Conservatives if their working-class surge continues.

Mr Johnson has ordered a Cabinet Office probe overseen by a legal expert as he scrambles to defuse the lobbying row.

The saga deepened last week after it emerged the former head of government procurement, Bill Crothers, took a part-time position with the firm while in his Whitehall post.

In the latest revelations today: 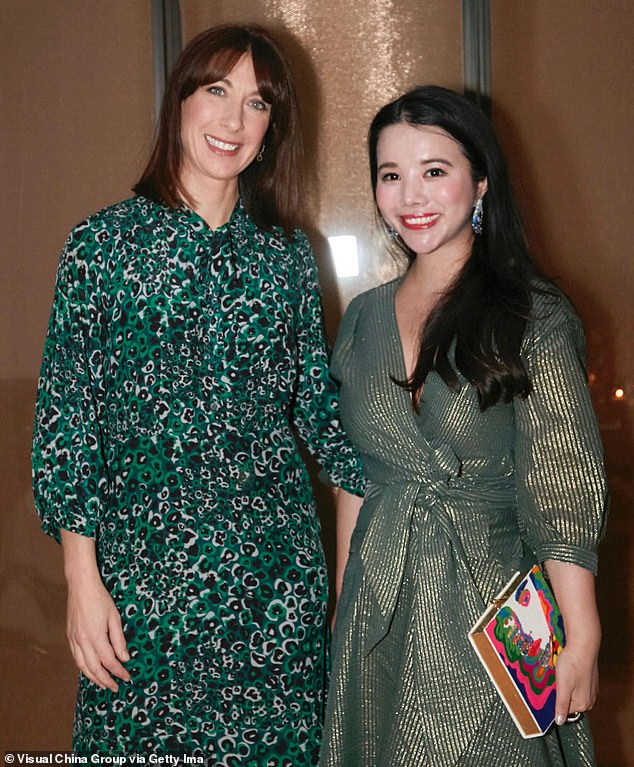 I hope you are keeping safe and well in these very strange times – and no doubt incredibly busy too!

On that, I know that Laurence in my office has passed a couple of people onto your team who have contacted me with tech solutions they think might be deployed in the UK to help with the Covid effort. Thanks so much for considering these and dealing with them, especially when you’re so busy. I do appreciate it.

I hope you don’t mind, but I did want to get in touch myself about one of the businesses I now work with, Greensill (https://www.greensill.com), the global leader in supply chain finance (SCF) and, arguably, now the UK’s leading fintech firm, and introduce you to Bill Crothers, a fellow board member and member of the exec team. Bill worked in the Cabinet Office during the coalition years, leading the government’s procurement and commercial agenda. e also tells me that you each received your CBs at the same investiture!

As you may be aware, Greensill have recently launched a digital solution (recently rebranded from Greensill Pay to Earnd) which helps with one of the SOS’s and your key priorities: helping all NHS employees’ welfare, morale, and wellbeing. In short, this is an app that allows NHS employees to draw their salary earned, not yet paid, in real time using a simple app. Importantly, it is free for employees and for employers, and Greensill have committed that they will never charge for the service to the NHS and will never sell an employee’s data.

This offers the potential for a material benefit across the NHS (and will pave the way for social care as well).

Employees (especially low paid) will benefit, as well as it offering cost savings to trusts.

As you can imagine, Matt Hancock, David Prior [NHS England chairman], Simon Stevens [NHS chief executive], as well as the many trust CEOs, are extremely positive about this innovative offer. The service is already live in Royal Free and in pilot at two other trusts. Jim Mackey [former head of NHS Improvement], for example, and other trusts such as Salford, Moorfields and others, will likely implement it rapidly once they get some breathing space. NHS Professionals have written to express a willingness to proceed in principle.

Our ask is about ESR [electronic staff records], as Earnd will be much slicker if it can obtain access to employee data in ESR. The team at Greensill are in positive discussions with the relevant members of BSA [NHS Business Services Authority] on this (BSA is a key client of Greensill, whereby Greensill pay, as part of their other core “SCF” offering, about £1.5 billion p.a. early to pharmacies ? this is expected to rise to closer to £8 billion p.a. by end of this calendar year), but I think some help from you would go a long way.

Separately, they are seeking to gain access to trust data held by the dominant rostering system, Allocate.

This is of such potential importance in contributing to the priority of doing all we can to help NHS employees at the current time, and in the future, that I thought you should be aware and would be interested to know a little more. It is in this context that I would like to introduce you to Bill and suggest that you meet (albeit virtually) to discuss further, especially the ESR issue. I hope you don’t mind me making this intro.

Finally, and importantly, once this is all over, it would be great to see you again – maybe for lunch? Let’s stay in touch! Thank you Matthew for all you’re doing and for your help with this. I look forward to catching-up soon.

An inquiry into lobbying by David Cameron should also examine a meeting that the former Prime Minister had with Philip Hammond amid suspicion that he may have used it to pressure the Government into supporting a lucrative £700million UK -China investment fund, according to the Chairman of the Commons Standards Committee.

As PM, Mr Cameron – the subject of an independent inquiry by lawyer Nigel Boardman over his lobbying of Ministers and Whitehall officials on behalf of loans firm Greensill Capital – hailed a ‘golden era’ in trade relations between Britain and China.

After leaving Downing Street, he seemingly hoped to cash in with a new private equity fund proposed by his friend Lord Chadlington, who had donated thousands of pounds to his Tory leadership campaign. 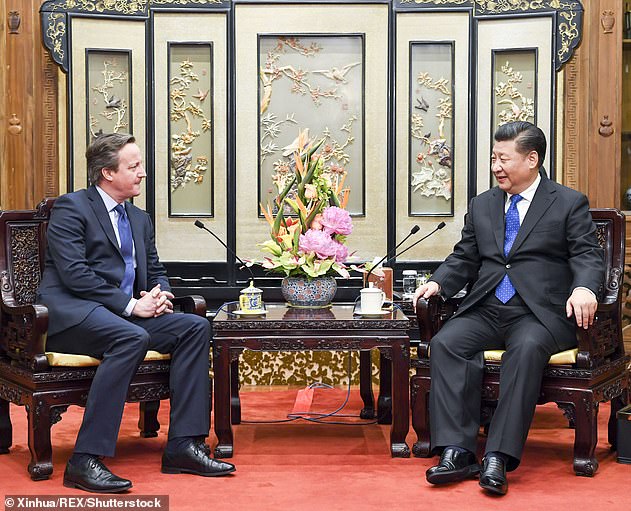 By January 2018, Mr Cameron was back in Beijing, this time for talks with Chinese President Xi Jinping (pictured together) about the initiative which could potentially net him millions

In October that year – 15 months after stepping down as PM – he met with Mr Hammond, the then Chancellor, and two months later the Treasury gave its crucial support for the fund for which Mr Cameron was to be Vice-Chairman.

By January 2018, Mr Cameron was back in Beijing, this time for talks with Chinese President Xi Jinping about the initiative which could potentially net him millions.

‘Excellent meeting & enjoyable dinner with President Xi Jinping in Beijing, to talk about the ‘Golden Era’ in UK-China relations & plans for the new UK-China Fund,’ he tweeted at the time.

Mr Cameron’s office last night said his meeting with Mr Hammond had been only to seek Government support for the ‘concept of a bilateral fund’ and he had not lobbied Ministers on behalf of the fund’s investors or partners.

He informed the Advisory Committee on Business Appointments (Acoba), which advises former Ministers and civil servants on outside employment, about the meeting, his representatives added.