Thousands of Venezuelans took to the streets on Saturday to protest against President Nicolas Maduro’s reign at the end of another dramatic week in the crisis-stricken country. Venezuelans waved placards in Caracas as they rallied against ongoing crippling blackouts and food shortages, which they say has worsened over the past month. Anger against President Maduro has mounted in recent days after the socialist dictator imposed a 30-day rationing of electricity, along with school closures and a 2pm workday finish. Opposition figurehead Juan Guaido, who declared himself interim president in January, earlier encouraged his supporters to demonstrate against Mr Maduro’s government.

He was stripped of his parliamentary immunity on Thursday meaning he could face arrest.

Mr Guaido, the head of the National Assembly party, is now recognised by more than 450 western nations as the country’s legitimate leader.

But his efforts at getting humanitarian aid into the country have so far failed, with citizens dealing with daily food and water shortages, and power outages.

This is because the country’s military remains loyal to Mr Maduro despite widespread dissatisfaction within its ranks.

Militia members continued their ongoing support of the incumbent president during a separate rally called by Mr Maduro in Caracas yesterday. 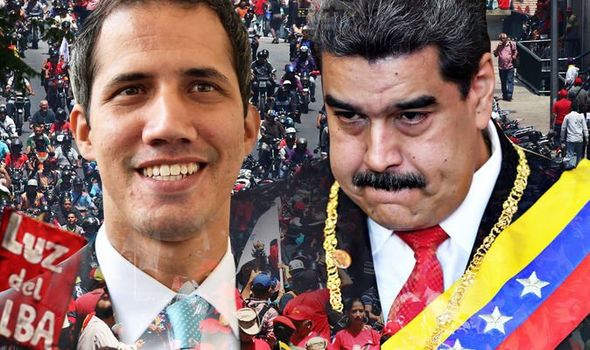 Despite this, Venezuela expert Mark Keller says the military’s support is not unwavering and is coming to an end.

Mark Keller, lead analyst at The Economist Intelligence Unit (EIU), told Express.co.uk that US sanctions on Venezuela’s oil trade are are set to kick in.

The US previously accounted for 40 percent of Venezuela’s oil experts so the massive dent in funding for the state-run oil company PDVSA will be a major blow for Mr Maduro.

Mr Keller explained: “At some point the money is going to run out and Maduro is not going to be able to pay the military. 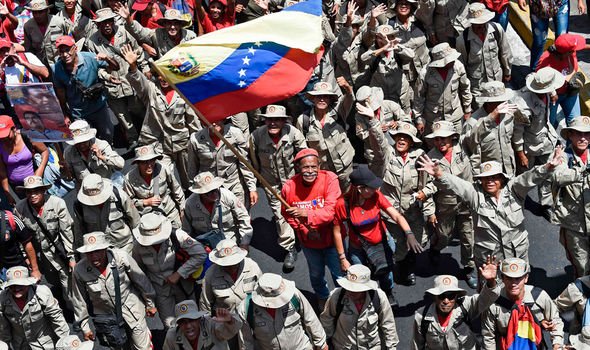 In the interlude, Mr Guaido may have to look at joining forces with the current regime and keeping elements of the fiefdom, Mr Keller said.

He said: “There is not much he can do. He just has to keep people on his side and keep pressure on the government.

“These things are eventually going to lead to crises.”

The EIU has drawn up four medium-term scenarios of what could happen next, presenting a Guaido-led transition government as the “most likely” option at present. 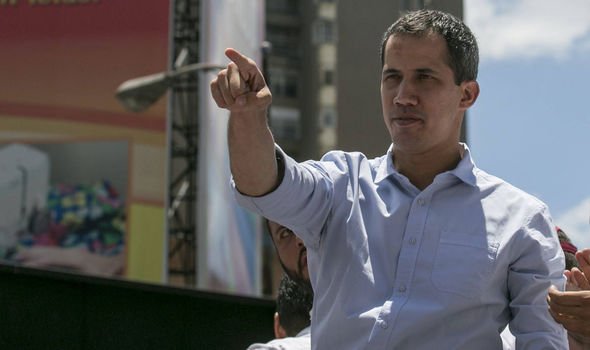 In this case, Mr Maduro and other senior government figures would be expelled while regime “pragmatists” would stay on in return for political stability.

A transition government would not be without its challenges, with Russian and China expected to keep flexing their muscles while protecting Venezuelan investments.

The latest EIU analyst forecast states: “A transitional government would face considerable challenges, and stability would be far from guaranteed.

“To begin with, it is unclear just how much power the opposition would hold. The opposition’s leverage mostly comes from its command of international support.

“Although the opposition may now call for a complete removal of the entire regime, its international backers may be more interested in removing Mr Maduro and restoring stability to the region by stemming Venezuelan refugee flows into Latin America.

“Once the balance of power in the transitional government has been determined, there is no guarantee that a unity government would remain in place if the opposition failed to deliver on its end of the bargain, namely swift economic and social improvements.”