RICHARD LITTLEJOHN: Why do MPs put up with vagrants on their doorstep?

RICHARD LITTLEJOHN: Why do MPs put up with vagrants on their doorstep?

Fancy a fashionable pied a terre in the heart of London, but can’t afford the seven-figure sum it would take to secure even a small flat in SW1?

No problem. Despite the fact that the average property price in Westminster is north of £1.5million, you can still find a funky little pad conveniently situated for Downing Street and the River Thames.

Get yourself down to the underpass which links the Tube station with the Palace of Westminster, pitch a tent and hang up a ‘Do Not Disturb’ sign.

Don’t worry, no one will attempt to move you on. You’re entitled to claim squatters’ rights and, if you’re lucky, benevolent passers-by may chuck a few coins into your sleeping bag as they make their way in and out of work.

Regular readers will recall the story I brought you in February about the corpse discovered in the subway between the Houses of Parliament and Westminster Underground station.

It turned out the deceased was an Angolan paedophile who had twice been deported from Britain but managed to waltz back in using a Portuguese passport, thanks to EU freedom of movement rules. 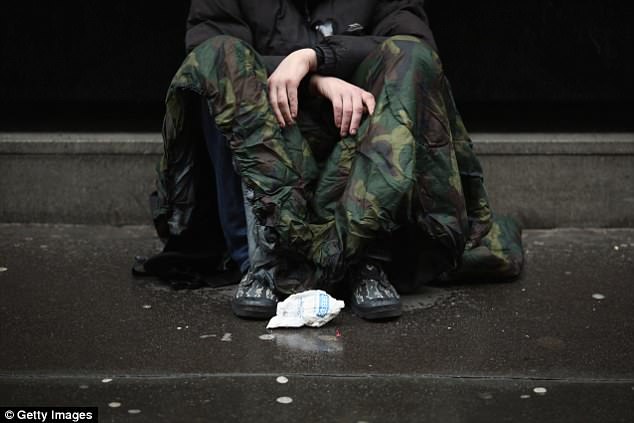 Instead of wondering how the hell he came to be not just in the underpass, but also in this country illegally, politicians and the soppy Left-wing commentariat went into hand-wringing overdrive.

I should have rushed down there with a few Portashrines from the lock-up, complete with teddy bears and petrol station flower arrangements. I’m surprised they didn’t have a minute’s silence before Prime Minister’s Questions.

Still, you would have thought that after cloaking themselves in the pious glow of bogus compassion, MPs might have taken steps to stop people sleeping rough on their doorstep in future.

Far from it. For the past few weeks, a couple have been living, on and off, in the same subway, just yards from the reception desk and the security checkpoint.

The man and woman, who could be in their 20s, 30s or 40s (it’s difficult to tell through the filth), sound as if they come from the North-East of England.

They arrived with sleeping bags and subsequently put up a tent. Their turf is marked by empty wine bottles and an acrid smell of stale urine — since they chose to use the subway as a toilet rather than take advantage of the public conveniences a few yards away in the Tube station.

They frequently shout abuse at staff going to and from their offices in the Palace of Westminster and have been known to copulate noisily, oblivious to the sensibilities of passing pedestrians.

On one recent morning, at around 9am, a female Commons employee observed the woman performing what is traditionally described in family newspapers as a ‘sex act’ on her male companion. Who said romance was dead?

Complaints have been made to the authorities, but nobody wants to know. Another member of staff, who understandably wishes to remain anonymous, told me that even though the couple are clearly visible from the reception desk, security guards say they are not their responsibility.

The Serjeant At Arms’ office at Westminster didn’t respond and the British Transport Police at the Tube station said it was a matter for the Met.

Eventually, an officer from Scotland Yard did get back to one of the complainants but said there was nothing the police could do because the couple weren’t doing anything illegal and, anyway, it was their ‘home’.

Run that by me again. Apparently, having sex in public is no longer considered to be an offence, provided it takes place in a sleeping bag or tent — even if situated in a public thoroughfare.

Nor is screaming abuse at people going about their lawful business, urinating in public or scattering bottles on the pavement considered worthy of the constabulary’s valuable time. And since when has a sleeping bag in a subway been classified as somebody’s ‘home’, entitling them to the same privacy rights and protections as Howard and Hilda living in a three-bed semi in suburbia?

Quite apart from the fact that having drunken vagrants cluttering up one of the busiest entrances to Parliament is not a good look by any stretch of the imagination, there really is no reason for anyone to sleep in the subway, darling.

There will, of course, always be those who fall through the cracks. But that’s no excuse. Tens of millions of pounds have been spent on providing the homeless with a roof over their heads.

As recently as last December, 18 charities along with the Mayor Sadiq Khan launched a high-profile initiative under the banner ‘No one needs to sleep rough in London’. Khan himself said: ‘One person sleeping rough is one too many.’

Quite. So how come this particular couple appear to have licence to set up ‘home’ in a busy pedestrian underpass outside the Houses of Parliament and are free to behave as they please?

A number of councils are now cracking down on rough sleeping, drinking in public and aggressive begging. Not before time. Offenders face fines and possible jail sentences. 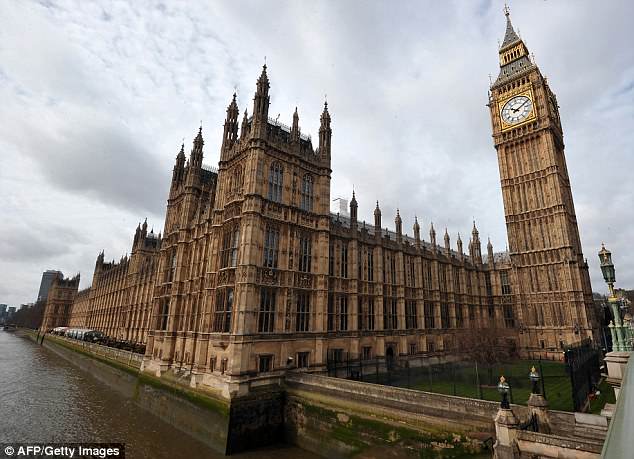 You won’t be surprised to learn that The Guardian yesterday worked itself up into a front-page tizzy of righteous indignation over this callous victimisation of ‘vulnerable’ people.

One dopey bird from what used to be called the National Council for Civil Liberties wailed that people were being fined for ‘being poor’. No, they’re not. They’re being fined for being a bloody nuisance. Why should staff and visitors to Westminster have to negotiate a river of urine and a pile of empty wine bottles simply to get into the Houses of Parliament?

My informant tells me that the police now say they will liaise with homeless charities to see if the problem can be resolved. But even if the couple are allocated room in a shelter, there’s no guarantee that they will stay there.

What’s to stop them returning to the underpass? After all, the dead Angolan child molester had been living in a hostel run by a local church, but decided he was happier dossing down on the streets.

Compassion for those less fortunate than ourselves is all very well. And I’ve always been a supporter of the Big Issue. But this is just plain crazy. How the hell did we end up tolerating vagrants setting up ‘home’, drinking cheap wine from bottles, fornicating loudly and abusing passers-by just a few yards from the entrance to the Mother of Parliaments?

Let’s hope they accept a permanent place in a homeless shelter. If not, a well-aimed fire hose should do the trick.

Bible-bashing Episcopalian Bishop Michael Curry reminded me of the fire-and-brimstone preacher played by the late Godfather of Soul, James Brown, in the Blues Brothers movie.

It only needed Harry and William to dance down the aisle dressed up as Jake and Elwood. Someone should have given Her Maj a tambourine.

The appearance of the Kingdom Choir, singing Stand By Me, helped complete the brief transformation of St George’s Chapel, Windsor, into a Deep South tabernacle.

As a life member of the Stand By Me Club, I was delighted with their performance. They are immediately rewarded with honorary membership. All you have to do to join is stand up and sing Stand By Me in public. 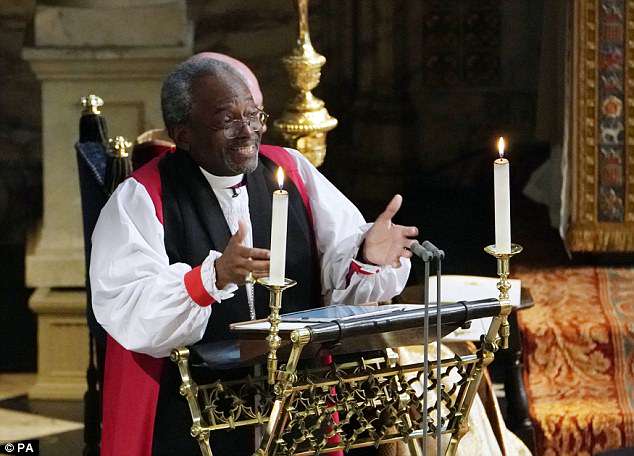 Bible-bashing Episcopalian Bishop Michael Curry reminded me of the fire-and-brimstone preacher played by the late Godfather of Soul, James Brown, in the Blues Brothers movie

It’s one of the great soul anthems, written by Ben E King, who had a hit with it, and the legendary duo Jerry Leiber and Mike Stoller, who wrote for everyone from Elvis to The Drifters.

So it’s a pity that the flunkey who compiled the Order of Service at the royal wedding couldn’t get Stoller’s name right, spelling it ‘Stroller’, with an R.

That’s no way to treat genuine rock’n’roll royalty. Bishop Curry should bring hellfire and damnation down upon the head of whoever screwed up.

The Tories have been considering handing out discount cards for restaurants like Nando’s in an attempt to attract new members. Talk about desperate. Naturally, no one bothered to ask Nando’s, which immediately distanced itself from the scheme.

Any association with the Conservatives is likely to result in a brick through the window. But whatever possessed them to think offering cut-price chicken was a surefire recipe for boosting their support?

Why don’t they try something a little more imaginative, such as cutting taxes and delivering the proper Brexit 17.4million people voted for, instead of squabbling like spoilt schoolgirls.

Enjoyed The Sun’s front-page headline on Saturday over a picture of a beaming Meghan Markle: ‘I’m Getting Harryed In The Morning.’ Just as well Harry wasn’t christened Roger.