We HAVE to get tougher or more may die: Former head of Counter Terrorism at the Met RICHARD WALTON says all terrorists should serve their full term

The covert operation of the kind deployed by the Met’s Counter Terrorism Command (SO15) against the Streatham attacker Sudesh Amman, a terrorist released recently from prison, was a major and complex undertaking.

As I know from my time leading the Counter Terrorism Command, such operations are extremely costly and can be used only against a small number of targets, due to the finite number of specialist officers available nationally to carry them out.

That up to 25 officers were being used to watch Amman’s every movement once he was released means that he was likely to have been considered a top ten terrorist threat in the UK. But why was he free in the first place? 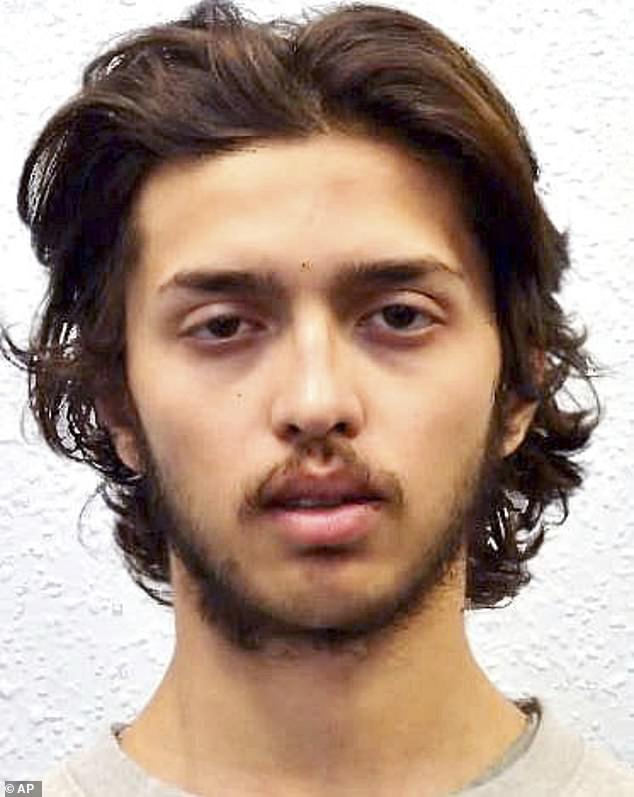 Sudesh Amman (pictured), was shot dead by police after he stabbed people in Streatham, south London, on Sunday

To follow him – and reportedly stop his attack within seconds – would have required highly trained, dedicated surveillance officers, working alongside a covert specialist firearms team in support.

The cost of running such an operation is tens of thousands of pounds per week. If 24-hour surveillance is needed, the price tag can sometimes exceed £1million, should the operation run from months into years.

At any one time in the UK, these high-priority operations are run against the targets whom MI5 and counter-terrorism police assess as being the most ‘high threat’ to the public.

Sudesh Amman was an obsessive online gamer who told friends he wanted to play the violent ‘shooter’ video game Call of Duty ‘in real life’.

Intelligence were first tipped off about Amman’s extremism when he posted pictures in gaming chat rooms of an IS flag and a cache of weapons.

The Dutch blogger who first alerted the UK authorities infiltrated the terrorist’s chats on the encrypted messaging service Telegram.

He wrote in a 2018 blog: ‘Malik indicates that he would rather play the game COD, or Call of Duty, in real life than virtual.’ Yesterday he released screenshots of Amman’s chats, including one which read: ‘Splash splash (stab someone).

Make an kuffar (non-believer) drown in his blood. Joke not tryna be bait for all u feds.’

The revelation came as the family home of another of Amman’s online gamer friends was raided yesterday.

Rezwan Khan, 20, had been arrested on suspicion of preparing acts of terrorism at the same time as Amman in May last year but, although police said the arrests were linked, he was released.

No arrests were made after the latest raid on the house in Bishop’s Stortford, Hertfordshire.

Weekly meetings decide which subjects should receive the most intense and costly surveillance and senior police officers decide if the operation merits the deployment of firearms officers.

The senior investigating officer in the Counter Terrorism Command who authorised this operation has undoubtedly saved lives by correctly deploying a firearms team as part of the covert operation. Had Amman not been immediately confronted by armed officers when he embarked on his attack, many lives could have been lost.

But there simply aren’t enough officers to follow every known and dangerous terrorist. Even in this case, with all the resources involved, Amman managed to stab two people before the attack was stopped.

It is a welcome step that the Justice Secretary, Robert Buckland, announced emergency legislation in the House of Commons yesterday that means no terrorist offenders will be released automatically having served half of their sentence with no review.

Any release before the end of their sentence will be dependent on risk assessment by the Parole Board, he said.

Now no terrorist offender will be released before the end of their custodial term unless the Parole Board agrees it, and offenders will be considered for release only once they have served two-thirds of their sentence.

But the Government could go further. The threat that terrorist prisoners pose is extremely high, both inside and upon release from prison.

In a paper published just two weeks ago by the think-tank Policy Exchange, entitled Justice that Protects, I recommended that all terrorist offenders should serve their full term.

I argued that a specially convened Parole Board should oversee – with support from the police and intelligence agencies – a comprehensive threat and risk assessment of all terrorist offenders being released into the community, even once they have served their full sentence.

I would also recommend that ministers consider a legally robust system with judicial oversight of ‘post-sentence detention’ for the very small number of the most dangerous terrorist offenders, prohibiting their release if they are assessed by the police and intelligence agencies as continuing to present a direct threat to national security. 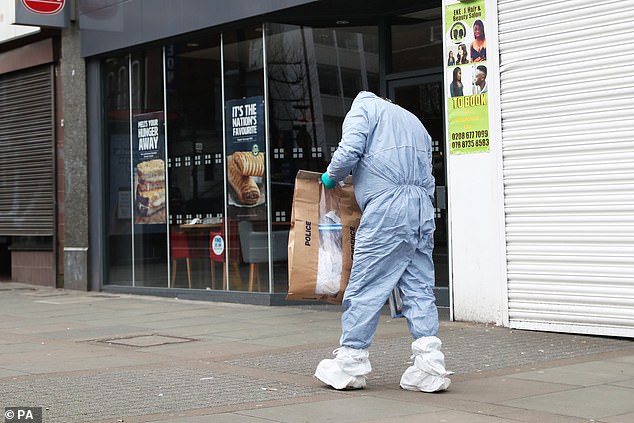 Pictured: A forensic officer is seen scanning the area following the terror attack in Streatham High Road on Sunday

Australia introduced this in 2016 for renewable annual periods of three years.

Had this been in place, Amman would not have been released – and last night, the mood music in Whitehall was that this is being considered.

As a country, we remain naive when dealing with seriously dangerous Islamist terrorists.

The time has come to put public safety first, to get tough on known convicted terrorists who subscribe to one of the most dangerous ideologies in modern times.

Quite simply, they should not be released unless we are confident that they do not pose a serious threat to our safety. The public expects nothing less.