SAN ANTONIO — In a quiet strip mall off highway 85, the British-born author Diana Kennedy stepped out of the car and into a hot parking lot, cursing.

Not so long ago, Ms. Kennedy practically lived on the road, traveling the Mexican countryside in her pickup truck to research her cookbooks. But now that she was 96, a road trip was hell on her artificial hips.

Ms. Kennedy started her career with “The Cuisines of Mexico” in 1972. The plurality of that title became the foundation of her work: reporting on the country’s culinary diversity, meticulously recording regional recipes and crediting them to home cooks, contextualizing food with the kinds of observations more commonly found in the work of botanists, anthropologists and historians. 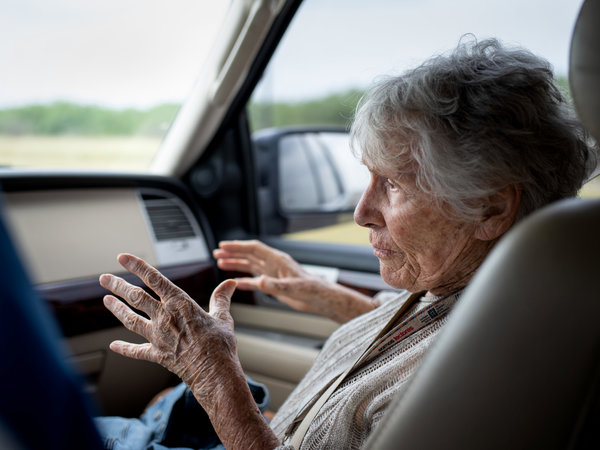 Eight books and half a century later, Ms. Kennedy is protective of her legacy. When the University of Texas at San Antonio asked to acquire her many hundreds of slides, notes and scrapbooks, and to restore her small collection of 19th-century Mexican cookbooks, she was thrilled, but there was no way she was going to sit around at home, waiting for the materials to arrive in Texas by mail.

“My work, my books, they’re a part of myself,” she said, adjusting her oversize black sunglasses in the passenger seat. “Would you ship your life off with a messenger service? No!”

Friends took turns driving Ms. Kennedy and her work on a two-day journey that started at her home in the countryside of Michoacán, in western Mexico, and ended over 800 miles north in San Antonio, where a team from the university was waiting.

“This is why I don’t like traveling with other people,” she sighed, as we got in the car in Monterrey, a few hours south of the Texas border, setting off on the second leg of the trip. I’d asked, gently, if we might be stopping for snacks. “If you want snacks, you take them with you!”

To those in the world of book publishing and food journalism, Ms. Kennedy is, by reputation, ferocious. Brilliant. Direct. Uncompromising. She is known for writing irate letters to editors and sending in corrections. In stories about her, and there have been many, she’s often described as “prickly.”

“For God’s sake, I’m not trying to win a popularity contest, I’m a cook!” she said, digging through her ripped leather purse for some lipstick. “There’s far too much mediocrity in this world, and someone’s got to say something.”

Ms. Kennedy never hesitates. The coffee we stopped for on the road was “lukewarm” and “terribly weak,” even after the barista added two extra shots of espresso. The brisket was dry, “not peppery enough,” and needed more salt. A lemon-poppy seed muffin that we shared was “competently mediocre, wouldn’t you agree?” And the Scotch — two ounces on ice — was watery.

“Doesn’t anyone know how to make a Scotch anymore?” Ms. Kennedy said with a grimace.

To the United States border agents in Laredo, she may have appeared as a gentle grandmother, crossing into Texas with a cane in one hand and a messy, overstuffed handbag in the other. But Ms. Kennedy is a searing, quick-witted woman, who sleeps each night in Mexico with a .25-caliber pistol under her pillow. (“I don’t like guns,” she noted. “But I don’t like feeling vulnerable either.”)

As we sped north, past a blur of yucca trees, Ms. Kennedy told stories and occasionally cackled, gesturing with thin, sun-browned arms. Her old friend Concha Lupe Garza had taken over the driving.

“What’s that one line, that great line you like to say?” Ms. Garza asked her.

That year, Ms. Kennedy met Paul Kennedy, a foreign correspondent for The New York Times covering Latin America, at the Hotel Oloffson in Haiti. She describes their connection as powerful and immediate, and they did, in fact, get married. But less than a decade later, Mr. Kennedy died of cancer.

In the collection of slides that Ms. Kennedy brought with her to the library, there is one of the hotel’s facade — framed with lush greenery — and a small, handwritten caption that reads simply, “Where we met.”

After her husband’s death, Ms. Kennedy taught Mexican cooking classes out of her apartment in New York — she and Mr. Kennedy left Mexico for the Upper West Side when he got sick.

Craig Claiborne, The Times’s food editor, attended these classes, including one that focused on a Yucatecan dish of papadzules. Mr. Claiborne wrote about it in the newspaper, listing several shops in New York where readers could find sour oranges and fresh cilantro, as well as pepitas to make their own pumpkin seed oil.

Editors in New York encouraged Ms. Kennedy to write a book about Mexican food. But how could she do that, she thought, without reporting it properly? Without contextualizing the recipes?

To Ms. Kennedy, who moved back to Mexico full-time in the 1970s, recipes weren’t just step-by-steps, or methods to be followed. They were crucial regional histories, socio-economic documents and records of ecological diversity. “I’m out to report what is disappearing,” she said as the car bumped along. “I drive over mountains, I sit with families, and I record.”

That dogged, journalistic approach is what makes the library’s collection of Ms. Kennedy’s work so valuable, with its envelopes stuffed full of menus and notes, carefully organized by Mexican state and year.

Ms. Kennedy thinks recipe-writing is deeply undervalued as creative work. She is furious anytime her recipes are republished without her permission, or taken out of their original context.

“If I had money, and lawyers, and time, I’d work on copyrighting recipes properly,” she said. “But we’ve got to face it, I’m getting old.”

Ms. Kennedy brought up her age a few times on the trip, though she never got sentimental or nostalgic. She stressed that she did not intend to live past 100, or become a “burden” to anyone.

She is old enough to have lost many of her professional contemporaries, including the great cookbook authors Marcella Hazan, Elizabeth David and Julia Child. When she reached the library, she did her best Child impression, to the delight of the archivists.

“Diana, you and I are no beauties,” she said, throwing her voice into a throaty, Julia-like flutter, repeating what Child once told her. “We need to be made up.”

After the library acquired her full collection, which included some correspondence with Child, a big dinner was planned in Ms. Kennedy’s honor. She had brought a black leather pantsuit to wear for the occasion, though she waved off remarks about its chicness as if it were the most practical outfit in her wardrobe.

“It doesn’t wrinkle easily! And if I drop any food on it, I just wipe it right off.”

But first, she would sit down, sip a weak Scotch, and rest. At least, she was supposed to rest. Ms. Kennedy follows politics in Mexico closely, as well as in the United States and Europe, and she wanted to talk about the news, going on a tear about women’s incontrovertible rights to their own bodies and the damage of climate change. Her friends tried to steer her away from the issues, but Ms. Kennedy wasn’t having it.

“People tell me to calm down and you know what? No! People don’t get angry enough,” she said. “People should get angrier!”

Long before she was a cookbook writer, Ms. Kennedy lived through World War II and the Nazi invasion of Europe. At 17, she joined the Women’s Timber Corps, spending her days in Wales with other civilians, cutting down trees with an ax, making her small, daily contribution toward the war effort. To supplement rations, she roasted potatoes and onions, and fished for trout.

“I learned everything from wartime,” she said in the car. There is still nothing more criminal to Ms. Kennedy than apathy, nothing ruder than waste.

A sense of political and ecological activism has been woven into her daily life for decades. She has spoken publicly about washing and reusing every single plastic bag that comes her way, collecting and recycling rainwater, and growing her own coffee beans at her home outside the city of Zitácuaro, about 100 miles west of Mexico City. It is how she believes everyone should live.

In San Antonio, friends said that now, at 96, she was finally considering the sale of that home, and moving closer to her doctors in Texas. Even more so than handing over her archives to the library, it would mark the end of an era. But Ms. Kennedy did not care to talk about it.

“I’d like to go on a walk,” she said. “I’ve not had time to do my exercise, which is very important after sitting all day in the car.”

Tejal Rao is the California restaurant critic at The Times and a columnist for the The New York Times Magazine, based in Los Angeles. She has won two James Beard Foundation awards for her restaurant criticism. @tejalrao