Pahoa: A new fissure roaring like jet engines and spewing magma has opened on Hawaii's Kilauea volcano, piling lava as high as a four-story building, as the area torn by the US volcano's eruption spread. 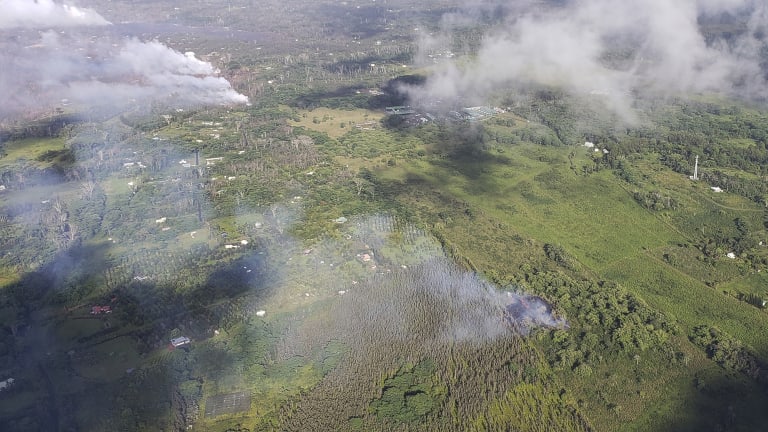 An aerial view of fissure 16, bottom right, that erupted on Saturday in the Big Island of Hawaii.

The  new fissure is close to a geothermal energy plant from which plant workers have removed  200,000 litres of pentane stored at the site as a precaution.

"It's right by my house, which is kind of scary," said Haley Clinton, 17, who walked to see the new crack with her father, Darryl, and sister Jolon, 15. "It's really cool."

From afar, the fissure gave off dull, thumping roars that sharpened on approach to a scream like a chorus of jet engines from venting steam and gas, mixed with the slapping sounds of liquid lava.

Within hours of opening, the fissure had piled reddish-black lava about 12 metres high and at least 45 metres in length. Chunks of magma were being spewed 30 meters in the air.

The intense heat left onlookers drenched with sweat, and the air was filled with an acrid, burned scent. With billowing gas and smoke blowing in the opposite direction, there was no pungent smell of toxic sulfur dioxide in the air. 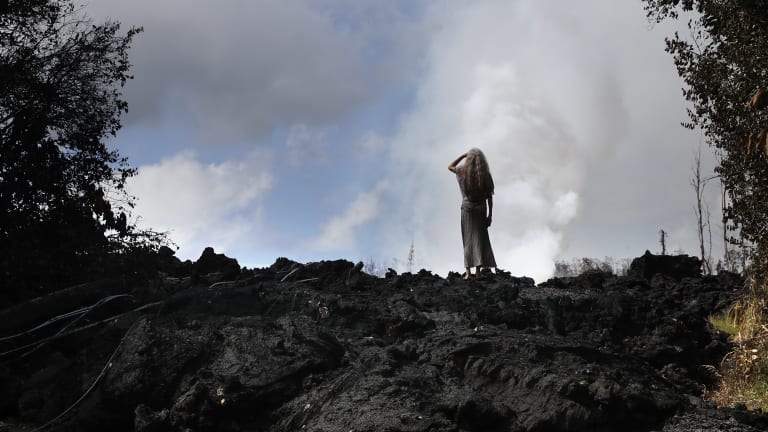 Hannique Ruder, a 65-year-old resident living in the Leilani Estates subdivision, stands on a mound of hardened lava near Pahoa, Hawaii on Friday.

Shortly after the fissure opened, the Geological Survey's Hawaii Volcano Observatory said seismic activity remained "elevated" at Kilauea's 1200-metre-high summit. The USGS reported a shallow but small earthquake with a magnitude of 3.5 hit the island on Saturday.

Geologists warned on Friday that a steam-driven eruption from the summit's Halemaumau crater could spew ash plumes 6100 metres high and spread ash and debris up to 19 km.

Kilauea's vents have been oozing relatively cool, sluggish magma left over from a similar event in 1955. Fresher magma could now emerge behind it and the volcano is threatening to start a series of explosive eruptions, scientists have said. 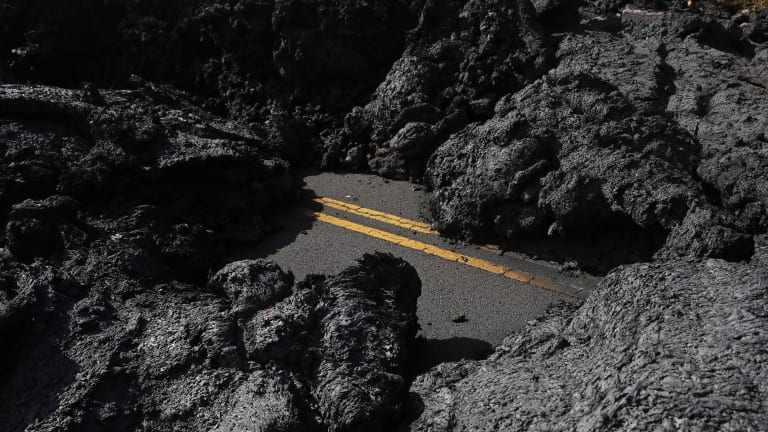 Centre lane lines are partially visible along the lava-covered road in the Leilani Estates subdivision near Pahoa.

As the area affected by Kilauea's eruption widens, Hawaii residents are racing to buy respirators to cope with the ash and toxic gases spewing from the volcano.

David Baxter, 54, an employee of Pahoa Auto Parts, said the shop was selling out of respirators as soon as they get in and had sold about 3000 so far. The shop was all out on Saturday.

"We pretty much bought up every (respirator) in the state, and we are selling them at cost – actually, a slight loss," said Baxter. "We need to breathe."

Even as the volcano continued to erupt, Hawaii Academy of Arts and Sciences, a charter middle and high school in Pahoa, will resume classes on Monday after being shut for a week.

A teacher at the school, Tiffany Edwards Hunts, who lives in the Big Island's Vacationland neighborhood, said she, her husband and two children – ages 10 and 6 – were readying to evacuate their home.

"My husband has been doing a good job of protecting them, but it is scary for kids," she said.

Some pets have been left behind as many residents have fled their homes, and the Hawaii Island Humane Society said it had rescued 16 dogs, three rabbits, four tortoises and four cats from the volcano zone.

Almost all had been picked up by their owners, and 1400 livestock and 32 horses had also been taken from the volcano zone, it said in a statement.