After more than three months gathering dust and moths in a cupboard, the UK’s red carpet was unrolled yesterday.

For the first time since lockdown began in March, Britain had a visitor, a proper one – a head of state no less.

The arrival of President Emmanuel Macron of France might not have been quite up to traditional state visit levels of pageantry. 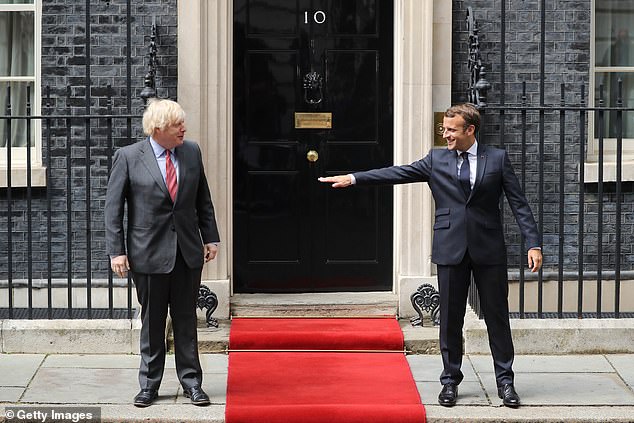 After more than three months gathering dust and moths in a cupboard, the UK’s red carpet was unrolled yesterday

There was no Household Cavalry escort, no state banquet. But it was a start.

Here was a royal welcome for a visiting world leader complete with a guard of honour, a flypast, a band – and even a walkabout (albeit one by the honoured guest, rather than the Royal Family).

President Macron was in London to mark the 80th anniversary of Charles de Gaulle’s famous rallying call to his compatriots from a London radio studio, a moment which his country commemorates as the birth of Free France.

If this was a big diplomatic day for Britain, it was an even bigger one for the French. This was the first time the president had left his country since the start of the coronavirus crisis.

This visit had been planned long before the outbreak, as had President Macron’s decision to bestow his country’s highest honour, the Legion d’Honneur, on the city of London.

‘On June 18, 1940, de Gaulle became the voice and the breath of Free France,’ President Macron declared, beneath the magnificently imperious statue of his predecessor, outside the General’s old headquarters in Carlton House Terrace. ‘It was here that the UK allowed the Free French to plant their flag.’ 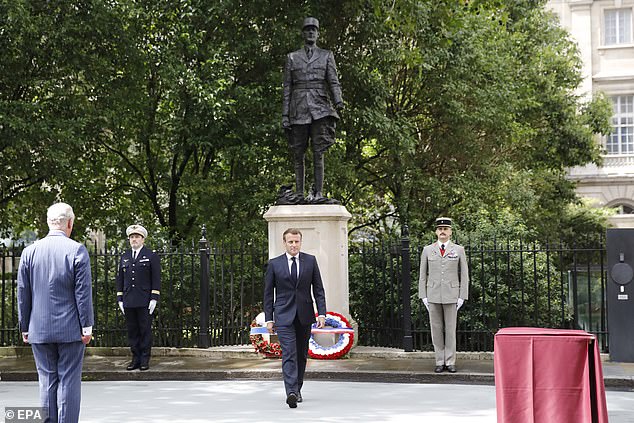 President Macron was in London to mark the 80th anniversary of Charles de Gaulle’s famous rallying call to his compatriots from a London radio studio, a moment which his country commemorates as the birth of Free France

Normally such an occasion would have involved the Queen. However, given the medical advice still restricting the movements of our 94-year-old Sovereign, the Government had asked the Prince of Wales and the Duchess of Cornwall to act as hosts.

Plans for a ‘travel corridor’ between the UK and France were in doubt last night after Boris Johnson and Emmanuel Macron failed to make a breakthrough on the issue.

The Prime Minister said this week that he hoped to use talks with the French president to make progress on a deal that would allow people ‘to travel freely to and from each other’s country’ without the need for quarantine. But last night’s meeting in No 10 ended without resolution to the issue, which threatens to blight the holiday plans of hundreds of thousands of families this summer.

Downing Street said the PM told Mr Macron that he wanted a deal by summer, as ‘the UK does not believe it makes sense for there to be prolonged negotiations into the autumn’.

They have now left Birkhall on the Balmoral estate, where they had been isolating during the lockdown, and have formally relocated to Highgrove, the Prince’s Gloucestershire estate.

Given that Scottish Government rules currently dictate that individuals ‘may move house, but only if it is absolutely necessary’, Clarence House officials were keen to stress that the royal move was only made at the formal request of the Government.

No return to Scotland will be contemplated without formal advice from both Downing Street and the Scottish Government.

President Macron, meanwhile, was granted an exemption from Britain’s two-week quarantine rules on the grounds that presidents, like lorry drivers and airline pilots, qualify as key workers.

A day devoted to bilateral bonhomie had started with a joint flypast over Paris by the Red Arrows of the RAF and their French counterparts, La Patrouille de France.

On his arrival in London, President Macron was formally received by the prince and the duchess at Clarence House, with much ‘namaste’-style pressing together of palms. Outside in the garden, the 1st Battalion Coldstream Guards had formed a Guard of Honour, accompanied by a traditional British downpour.

After inspecting the troops beneath an umbrella, the president was invited inside as staff served tea for three.

Under the new protocols of social distancing, Madame Macron had remained behind (though she had enjoyed a long conversation by phone with the duchess in the week) and the slimmed-down entourages of both parties were told to remain outside the room.

The tiny tea party was held in the (freshly deep-cleaned) private quarters of Clarence House rather than the larger state rooms. 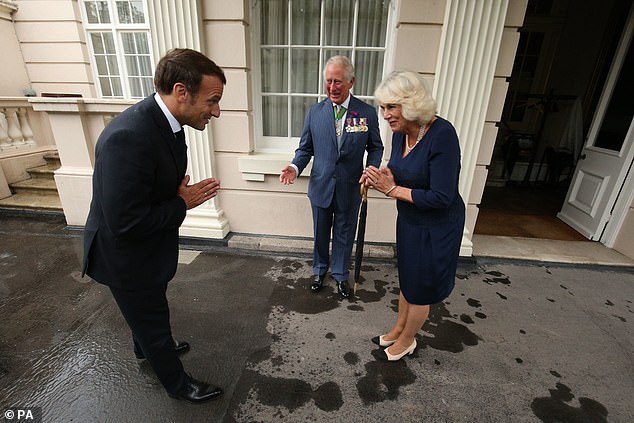 Given the medical advice still restricting the movements of our 94-year-old Queen, the Government had asked the Prince of Wales and the Duchess of Cornwall to act as hosts

Chairs had been set well apart with open windows ensuring plenty of fresh air. The rain had stopped by the time the prince led his guest up the Mall to pay respects at two statues which have (thus far) escaped the attention of the self-appointed statue Stasi of the British Left.

At the bronze figure of George VI, President Macron laid a wreath on behalf of the French people while the wartime monarch’s grandson looked on proudly.

The small delegation then walked up the steps to Carlton House Terrace for the main event at the feet of General de Gaulle.

There, both men laid wreaths. The prince’s bore a handwritten note: ‘In grateful remembrance of your service and sacrifice.’

De Gaulle was a little-known brigadier when he arrived in London in June 1940, following the fall of France.

He persuaded Churchill that he was the man to rally his fellow exiles and salvage his nation’s honour.

Just as the retreat from Dunkirk days earlier has become etched in the British psyche, so de Gaulle’s ‘Appel’ – from a BBC studio – has acquired a certain mythology of its own. 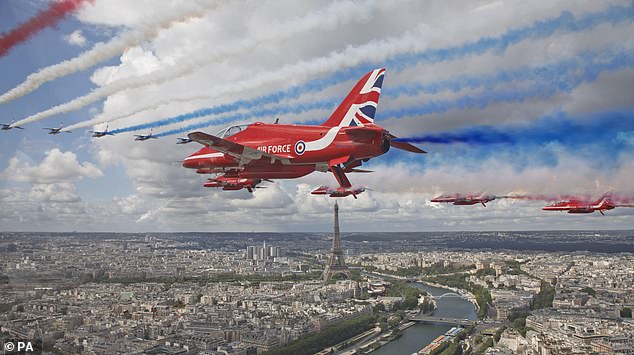 Here was a royal welcome for a visiting world leader complete with a guard of honour, a flypast, a band – and even a walkabout (albeit one by the honoured guest, rather than the Royal Family)

French children are taught that this was the birth of French resistance, culminating in victory four years later with the Allied invasion of Normandy.

Thereafter, de Gaulle was famously reluctant to share the credit for liberating his nation.

Yesterday, however, M Macron was generous with his tributes to Winston Churchill, the British people, the British Forces and the ‘serene determination of the Royal Family’.

He went on: ‘The British monarchy became the shelter of the French Republic. And on June 18, the UK gave its first weapon to Free France – a BBC microphone.’

Some members of the wartime Cabinet had actually been opposed to letting de Gaulle broadcast that day, given that they were still trying to woo the doomed remnants of what remained of the French government.

The BBC was not especially interested in the speech since they neglected to record any of it (any clips of the general’s wartime oratory come from later speeches).

And historians suggest that it was only heard by a small number of French people.

However, it was a turning point. De Gaulle’s words – ‘Must hope disappear? Is defeat final? No! For France is not alone! She is not alone!’ – were picked up by defiant elements of the French media. Further speeches were to follow.

M Macron hailed that inaugural broadcast as ‘a bridge for those who still believed in freedom’.

With that in mind, he was proud to confer the Legion d’Honneur on a city which had been ‘the last bastion of hope when everything seemed lost’.

Although the Mayor of London, Sadiq Khan, was present in the tiny socially-distanced crowd, the president presented the award – framed alongside the formal citation – to the prince.

M Macron had confined his speech to his mother tongue. The Prince of Wales, however, delivered most of his response in French (an essential language for any future king of bilingual Canada).

‘It is a bond forged through common experience, sanctified through shared sacrifice and burnished by the deep affection in which we hold each other,’ he declared. ‘Time and again our countries have stood together against tyranny and oppression, joining arms to defend the values we hold most dear.’

There was no mention of the other notable Franco-British landmark remembered every June 18: The Battle of Waterloo.

Instead, the prince reflected on his 34 official visits to France (he has made many private ones, too) and ‘the myriad ties that bind us together’. ‘Above all, like so many British people, my wife and I have long had the greatest possible fondness for France and her people.’

With the ceremonial formalities over, it was time for the political part of the visit.

The prince and duchess were driven away in a royal Rolls-Royce, whereupon M Macron walked straight past his own motorcade.

To the obvious surprise of his security detail, he set off for Downing Street on foot. 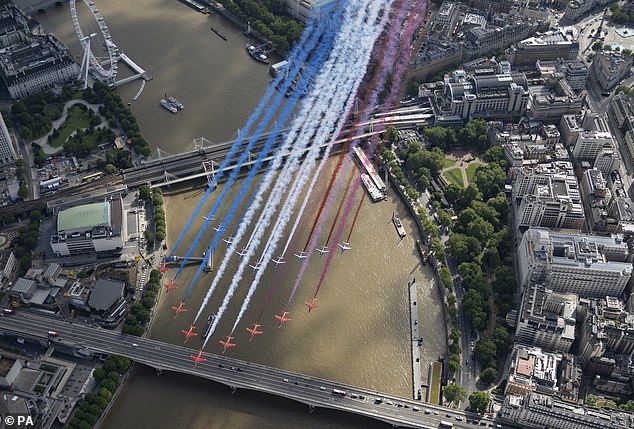 An hour later, the two leaders emerged to applaud the second flypast of the day by their respective air forces, before M Macron took the presidential jet home.

En route, he was cheered by a handful of French expatriates behind a barrier. The president walked over for a friendly chat and a few selfies, drawing the line at an outstretched hand.

As nervous Met Police bobbies formed a socially-distant bubble around their VVIP visitor, M Macron strode on past the statues of Curzon and Prince Frederick, Duke of York, down the steps to the Mall, over the road and up Horse Guards.

Having spent part of his pre-political career as a City banker at Rothschild’s, he knows his way around London.

Finally, he reached Downing Street via the back gate and walked up to be greeted by Boris Johnson – in noisy ‘Bienvenue!’ mode – on another moth-eaten red carpet.

An hour later, the two leaders emerged to applaud the second flypast of the day by their respective air forces, before M Macron took the presidential jet home.

Brexit and quarantine laws had been among the issues on the agenda but it was not a day for major quarrels.

Rather, this had been a day for celebrating one enduring French concept –the ‘entente cordiale’ – within the confines of another – the ‘cordon sanitaire’.