ROBERT HARDMAN reports from the streets of Chesham & Amersham

‘They’ve taken us for granted and ignored us’: ROBERT HARDMAN reports from the streets of Chesham & Amersham after historic defeat amid fury of the shire Tories who let the ‘yellow peril’ in

Whatever the pundits might claim, they didn’t see this one coming. There was no BBC by-election special running into the early hours of yesterday morning .

The armies of Press (myself included) who flocked to Hartlepool to witness last month’s demolition of the Labour Party had barely given a moment’s thought to this week’s by-election taking place in the Prime Minister’s own back yard.

And then – ‘Kapow!’ as Boris Johnson might say. A constituency that has only ever known a Tory MP suddenly found itself represented by a Liberal Democrat as of yesterday morning.

What’s more, the Lib Dems’ Sarah Green did not just nick Chesham & Amersham. This wreck of a party managed to drag itself from its hospital bed and win by a stonking 8,000 votes.

In other words, this has been a result every bit as surprising as one of those Tales of the Unexpected by this constituency’s most famous literary son, the late Roald Dahl. 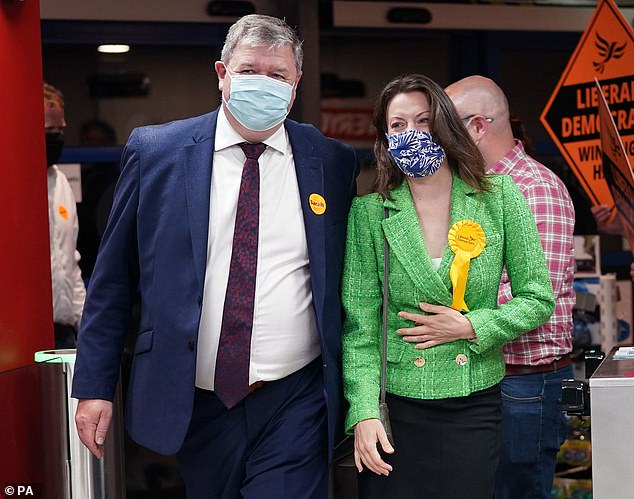 Liberal Democrat candidate Sarah Green and Alistair Carmichael, Liberal Democrat MP for Orkney and Shetland, are greeted by party supporters upon arriving for the declaration in the Chesham and Amersham by-election

But then you need only drive along the snug little lanes and lush green hills around Dahl’s home near Great Missenden to get an inkling of why this true-blue Tory slice of the Home Counties has just ejected the all-conquering Conservatives. It is summed up in the two words on the red signs which stand at almost every road junction hereabouts: ‘Works Traffic’.

However you try to dissect this result, you come back to the same conclusion. People on the fringes of the great urban sprawl of South East England are fed up with development.

A few ardent Remainers have tried to pin this result on a lingering Brexit hangover (this area was pretty keen on remaining in the EU).

But wander around the handsome towns and pretty villages which make up this constituency and you hear a different story.

This seat sits both at the end of the London Underground’s Metropolitan Line and also on the edge of the Chiltern Hills. It is surprisingly rural.

That may explain why everyone I meet is so sensitive to any prospect of further development. People are furious that this area is being ripped apart to make way for an HS2 London-to-Birmingham rail project from which they will derive zero benefit. Just last month, a huge drilling machine – nicknamed ‘Florence’ – began eating its way into the Chilterns. There really is no going back now.

On top of all that come fresh Tory pledges to relax building controls, concrete over great chunks of the Green Belt and pepper the countryside with new housing estates.

Not once does anyone mention Downing Street wallpaper to me, let alone Dominic Cummings’s fratricidal remarks or PPE provision. They are too busy complaining about HS2-related roadworks on the A413 or the fact that someone wants to cover another field with expensive houses. 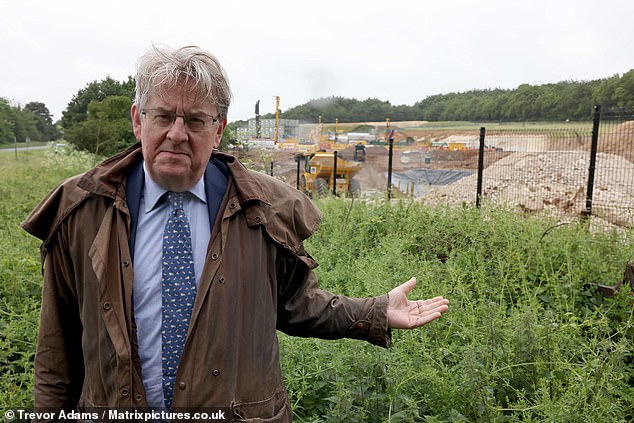 Not once does anyone mention Downing Street wallpaper to me, let alone Dominic Cummings’s fratricidal remarks or PPE provision, says Robert Hardman (pictured)

And they all offer one other reason for the Lib Dems’ shock victory: hard graft. Party leader Sir Ed Davey and his entire national operation (what’s left of it) have been focusing on this seat for weeks. ‘When you look at the sheer amount of leaflet-dropping, you’ve got to give them their due. They put everything in to this,’ says Amersham ironmonger Carol Morris.

‘We even got sent these handwritten envelopes … One friend of mine had a call reminding to her vote – and the caller turned out to be a Lib Dem worker in Carlisle!’

Carol is deeply impressed by the Lib Dem operation – and she did not even vote for them.

Her shop, a delightful old-fashioned ironmongery which has been here for 37 years and which stayed open all through the pandemic selling everything under the sun (even on Christmas Day), is straight out of the Margaret Thatcher playbook.

It actually sits underneath the old constituency office of the former MP, Dame Cheryl Gillan.

A hugely popular champion of the area who hated HS2 and enjoyed thumping great majorities, Dame Cheryl died in April, hence the by-election.

Walking through neighbouring Chesham, stopping people at random, I hear the same message from Martin, an engineer (who has voted Tory previously but not this time), from pensioners Daphne and Richard (who both voted Tory this time) and from record shop owner Dale (who usually votes Tory but didn’t bother voting at all).

All agree that the Conservatives have been complacent. Cosy up to the red wall all you like, Mr Johnson, but the blue wall is ready to bite you where it hurts.

As he enjoys a coffee on Chesham’s charming high street, Peter van der Sluijs tells me he voted for Lib Dem Sarah Green –despite being a member of the Labour Party.

‘I voted tactically – there was certainly no message for the current Labour leadership – but I have to say this result caught me by surprise,’ he says. 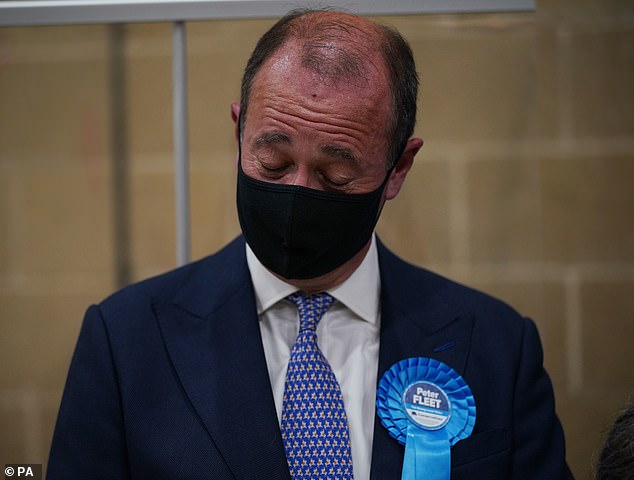 Boris Johnson dropped in for a photo opportunity here a few weeks ago with the Tory candidate, Peter Fleet (pictured), not that it did him much good

‘I think there was a general sense, even among Tories, of being taken for granted and of feeling ignored. It’s not just HS2 but also these new planning laws. People are very concerned.’

The new MP is fast asleep when I arrive, understandably given that she has not had any rest for 36 hours. But later on, I find some of the winning team celebrating in the General’s Arms, a busy pub in the centre of Chesham.

Boris Johnson dropped in for a photo opportunity here a few weeks ago with the Tory candidate, Peter Fleet, not that it did him much good.

I chat to Lib Dem stalwart Julian Heather, who is treating himself to a well-deserved glass of prosecco.

A former councillor in Lambeth for many years, he has spent the past five weeks travelling up from his south London home every day to help the party here in Chesham, knocking on thousands of doors.

‘We are the yellow peril!’ he laughs. ‘The other parties might call us the cockroaches of British politics but the fact is that whatever happens, we always crawl out of the ruins and fight another day.’

He hands me a leaflet which many people – including Tory insiders at Westminster – agree has played strongly in this by-election.

‘REVEALED: The threat facing the Chilterns from new planning laws.’ Inside, it is full of dire warnings about the threat to these green and pleasant hills if the Tories press ahead with what is presented as a free-for-all for the property developers.

It even includes a quote from Theresa May.

This patch used to be well-known as a location for Midsomer Murders. For now, at least, it is better-known for killing off the local Tory party. Given that the PM’s own Uxbridge seat is next door, that will be causing a few jitters in Downing Street.

Hartlepool may have taught us that there is no longer any such thing as a safe Labour seat.

Chesham and Amersham is a reminder that, in 21st Century politics, there is no longer such a thing as a ‘safe seat’ at all.