A top historian today hit back at Leicester University’s plans to drop literary giant Geoffrey Chaucer in favour of replacement modules focused on race and gender.

Plans emerged last week to shelve Chaucer’s The Canterbury Tales, as well as other works including old English epic poem Beowulf, in favour of a ‘decolonised’ curriculum.

The University quickly faced a barrage of criticism and but a spokesman insisted the authors were not being dropped for being ‘too white’.

On Tuesday, prominent academic Professor Robert Tombs, who wrote a bestselling book about the history of the English, told MailOnline that the plans were ‘crazy’.

He said that his own education was ‘narrow’ and he only recently discovered the likes of Chaucer and Beowulf, both of which ‘opened new worlds’.

The professor added it would be a ‘tragedy’ if the works were now ‘denied’ to students and said the point of literature ‘is to help is to imagine worlds we cannot otherwise reach’ rather than ‘to tell us about what is already familiar’. 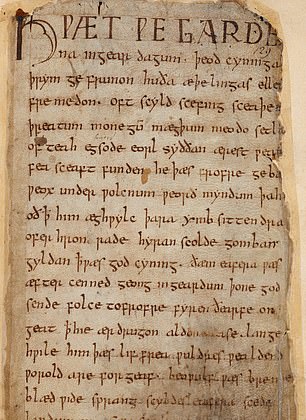 A top historian today hit back at Leicester University’s plans to drop literary giant Geoffrey Chaucer, as well as epic poem Beowolf, in favour of replacement modules focused on race and gender

The plans emerged last week after Leicester University management circulated an email to staff notifying them of changes to courses to focus on ‘race, ethnicity, sexuality and diversity’.

The email, which was obtained by the Telegraph, said: ‘The aim of our proposals (is) to offer a suite of undergraduate degrees that provide modules which students expect of an English degree.’

The new roster of modules were to be ‘excitingly innovative’ and would cover: ‘A chronological literary history, a selection of modules on race, ethnicity, sexuality and diversity, a decolonised curriculum, and new employability modules.’

The changes would affect anything written prior to 1500 – not limited to Chaucer and Beowulf.

Also under threat would be 14th-Century romance Sir Gawain and the Green Knight, Sir Thomas Malory’s Mort D’Arthur, which tells the legend of King Arthur. 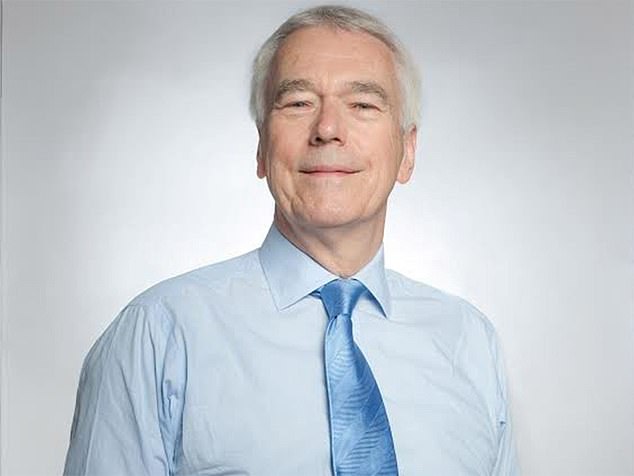 Prominent academic Professor Robert Tombs, who wrote a bestselling book about the history of the English, told MailOnline that the plans were ‘crazy’

The changes could even see works including John Milton’s Paradise Lost and poems by John Donne scrapped.

Hitting back at the plans, Professor Tombs told MailOnline: ‘I realize now that my own education was sadly narrow: both at school and at university very much focused on modern subjects – certainly nothing before Shakespeare.

‘Only very recently did I discover Homer, Chaucer and Beowulf, and every one opened new worlds.

‘What a tragedy if these are being denied to students now, and how crazy if this narrowing down is being done in the name of ‘diversity’ or ‘decolonization’.

‘The value of literature is to help is to imagine worlds we cannot otherwise reach, not to tell us about what is already familiar.’

Whilst Leicester bosses will keep modules covering William Shakespeare’s classic works, many of the academics who teach the under-threat courses could now lose their jobs. 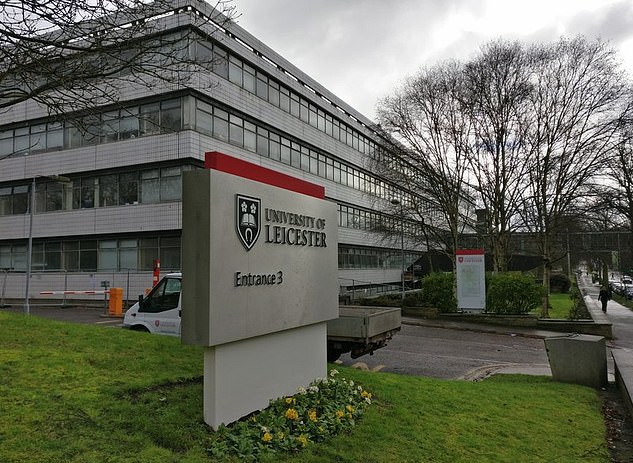 According to The Telegraph, up to 60 jobs are now under threat.

Vice Chancellor Nishan Canagarajah said it was part of a the long-term strategy to ‘compete on a global level’, adding: ‘To facilitate this, we may need to cease activity in a limited number of areas.’

Chaucer, the Father of English Literature

Geoffrey Chaucer (c. 1342 – 1400) ranks alongside William Shakespeare as one the most important poets of the English language.

His masterpiece, The Canterbury Tales, is considered one of the first works written in modern English, marking a shift from the Old English which preceded the Middle Ages.

For this reason he is described as ‘the first finder of our language.’

The Canterbury Tales was hugely popular in Medieval England because it was one of the few works which was written in English rather than French – the language of the ruling classes.

Chaucer’s poem follows a group of pilgrims on their way from London to Canterbury to visit the shrine of Saint Thomas Becket at the cathedral.

The pilgrims, including Chaucer himself, have a story-telling contest on their way to Canterbury and their 24 stories form the basis of the narrative.

The enduring popularity of the work is testament to its humour, characters and vivid descriptions of various social groups from knights to cooks.

Pilgrims tell tales of varying tones, some are pious and witty, others are vulgar and bawdy.

Chaucer originally planned to write more than a hundred tales but only completed 24.

In surviving copies the stories appear in various orders with the Hengwrt manuscript, held in the National Library of Wales, considered to be the most accurate.

Chaucer was born in London, his father was a wine maker as per family tradition.

In addition to his literature, Chaucer contributed to society as a courtier, diplomat and civil servant and was the trusted aide of three successive kings: Edward III, Richard II and Henry IV.

In 1994, literary critic Harold Bloom placed Chaucer among the greatest Western writers of all time.

Such is the respect for the writer, he was first person to be buried in Westminster Abbey’s Poets’ Corner.

Other academics also hit back at the proposals.

Dr Christine Rauer, a lecturer at the University of St Andrews, told MailOnline: ‘It’s hard to see why race, ethnicity, sexuality and diversity can’t be taught alongside Chaucer and Beowulf.

‘Bring in the new topics while also keeping the medieval!

‘Curriculum planners should think big – their students will later compete with people who studied elsewhere and who have a much wider range.

‘You will feel left out, if you only know half the story.’

Asked whether the texts might be too difficult, Dr Rauer said: ‘Medieval literature can seem hard at the beginning, but most good things in life are like that.

‘Self-confidence comes from overcoming difficulty, and the unexpected.’

Writing in the Daily Mail, he said: ‘I find these proposals not only depressing but profoundly wrong — as well as incredibly short-sighted and counter-productive.’

Last week, the university insisted to MailOnline the suggestions to change came after feedback from students and that nothing had been set in stone.

A spokesperson said: ‘Students at the University of Leicester will continue to study some of the best-loved authors in the English language, from Shakespeare, Austen and Dickens to Keats, Shelley and Byron, to Woolf, Toni Morrison and Colston Whitehead.

‘There is absolutely no truth to the suggestion that certain modules are being eliminated for being “too white.”

‘We want to offer courses that match our students’ own interests and enthusiasms, as reflected in their own choices and the feedback we have been hearing.

‘Leicester continues to be a research-intensive, comprehensive university that offers a broad range of subjects.

‘We will be engaging closely with staff and students to hear their ideas and suggestions in response to the proposals.’

A decade ago, Leicester came 17th in the Guardian University Guide’s national league tables. It was also top university for ‘student satisfaction’ outside Oxbridge.

However, the university has since slipped to number 77 out of the UK’s 121 universities, according to the Guardian’s most recent league table.

Last year, the university attracted ridicule for re-branding International Women’s Day as ‘International Womxn’s Day’. They said the move was to make it more friendly to the transgender community.

‘We use the term womxn as a more inclusive spelling of woman that includes any person who identifies as womxn,’ read its newsletter. 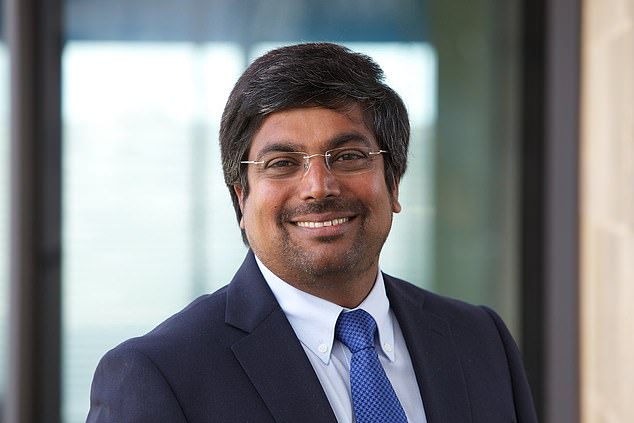 There is an ill-thought-out campaign by Leicester’s £250,000-a-year vice-chancellor Professor Nishan Canagarajah to ‘decolonise’ the curriculum

At 3,000 lines long, Beowulf is the longest epic poem in Old English – the language of England before the Norman Conquest.

It was written between 975 and 1025 and tells the story of a Scandinavian hero called Beowulf of Geatland.

He comes to the aid of Hrothgar, King of the Danes, whose warriors are besieged by the monster Grendel.

Before setting out to defeat Grendel, Beowulf feasts lavishly with the Danes in their great mead hall.

But one of their number mocks Beowulf, saying that he is not worthy of his reputation. The hero replies boastfully about his past achievements. 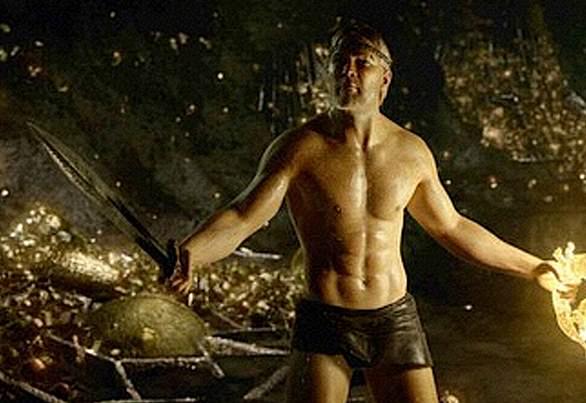 Later that night, Grendel arrives to terrorise the banquet.

Beowulf fights him unarmed and rips off one of the monster’s arms.

Grendel runs away back to his swamp to die and his arm is hung up in the great hall as a trophy.

Later Grendel’s mother, a terrifying swamp hag, attacks the mead hall and murders one of the Danish king’s senior officers before fleeing.

Beowulf leads a party to her swamp and dives into the water to kill her with his sword.

He returns home to the Geats and gives his queen Grendel’s mother’s severed head as a prize.

Later, when Beowulf is an old man, a thief disturbs a barrow where a dragon is guarding treasure.

The dragon unleashes fiery terror on the Geats and Beowulf goes to defeat the beast.

He is able to conquer the dragon but is mortally wounded in the encounter.

The Geats fear their kingdom will be overrun by their enemies after Beowulf is dead.

After his death, his body is burned on a massive funeral pyre and the Geats erect a tower in his memory.