A rogue tradesman who conned hundreds of elderly customers into paying up to £7,000 for shoddy driveway resurfacing work has been jailed for five-and-a-half years.

Allan Coutts, 60, of Sandhurst, Berkshire, who ran a tarmac repair business promised his victims a five year guarantee on his work – but it crumbled away in just weeks.

Prosecutors said Coutts, who charged between £500 and £7,000 for the work – some of which he failed to finish – made more than £1million.

Merthyr Tydfil Crown Court heard he bought a Highways Authority tarmac lorry and kept the logo on it to carry out his fraud between 2015 and 2016. 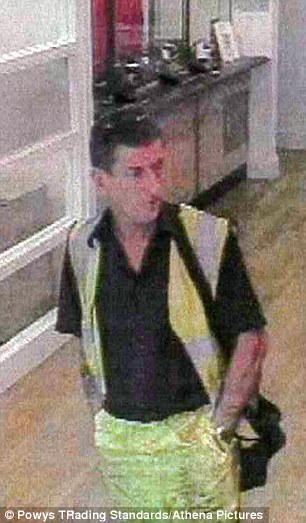 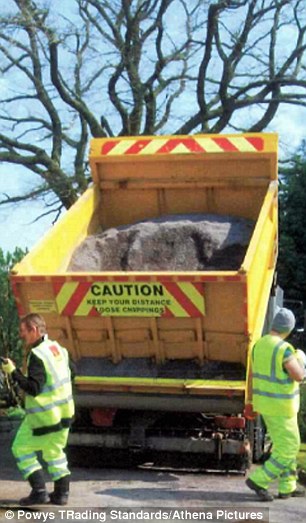 Allan Coutts, left, who ran an a tarmac repair business promised his victims a five year guarantee on his work – but it crumbled away in just weeks. Pictured right: Coutts (left) carrying out his work on the driveway of an unsuspecting victim

He visited the homes of elderly people claiming there was material left over and he could do a deal on a driveway before it hardened in his truck.

Judge Richard Twomlow said Coutts went out of his way to ‘ruthlessly target the vulnerable and elderly.’

He said the fraudulent business’ was conducted over a sustained period with a ‘great number of victims’.

The case was brought by Powys Council in South Wales, and he was sentenced yesterday after being found guilty of fraud at an earlier hearing this month. 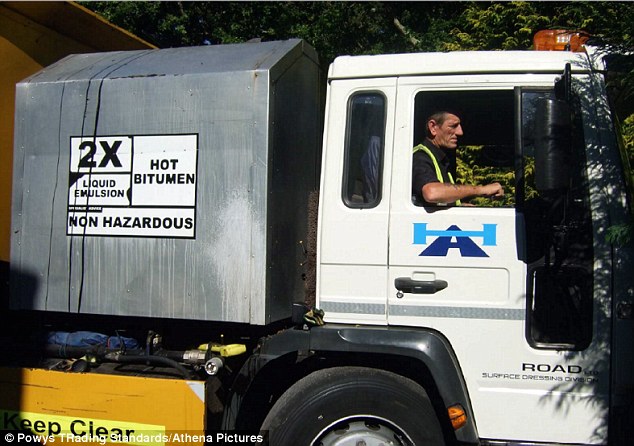 Coutts sat in his Highways Authority tarmac lorry, with the logo clearly visible on the drivers door

The trading standards investigation found he would take the sum for his work in cash, but would also accept card payments or bank transfers.

Investigators found up to £600,000 of cash and card payments in just over a year.

He traded under several names, including Roadmac Construction Limited, A. Coutts Tarmac Division and Roads, and Drives & Asphalting in a deliberate attempt to avoid detection.

One victim, Alan Crossley, 71, a retired GP from Powys, paid Coutts £2,000 to resurface the drive to his house.

‘The first really big storm we had after the work was completed it just washed away,’ Mr Crossley said. 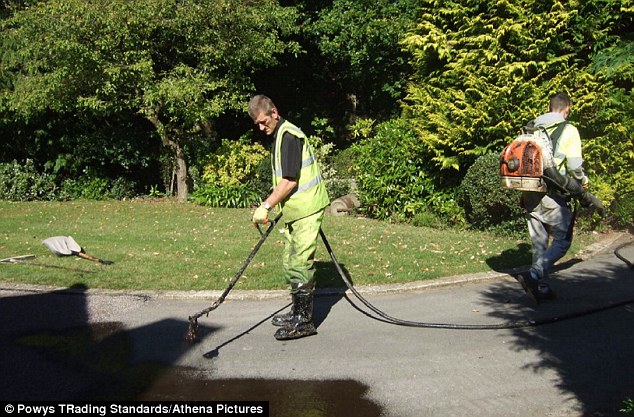 Coutts, pictured during a job, targeted victims with an average age of 75. He was jailed for five and a half years for fraud

‘Rainwater was running down my drive and it washed a whole river through the middle of the gravel.

‘It lasted just weeks and then I started clearing away everything he’d laid.

‘I felt stupid to be taken in by what was a fairly transparent operation.

‘I couldn’t believe the scale of the operation. I thought maybe I was one of half a dozen people in Powys, but this was nationwide. ‘

Clive Jones, principal trading Standards officer at Powys Council, said outside the court: ‘He pushed poor quality tarmac and work onto unsuspecting vulnerable consumers right across Wales and the UK.

‘He had little concern about the impact of his crimes or victims. The average age was 75 years old.’

‘He lured in customers with the false impression of a legitimate business only to leave behind poor quality and unfinished work.’