Romulo Yanes, Whose Photographs Captured the Beauty of Food, Dies at 62

Romulo Yanes, who in his 26 years as the staff photographer helped define Gourmet magazine’s striking visual identity by capturing the natural beauty of food without relying solely on the embellishments of ornamental props or elaborate styling, died on June 16 at his home in Tampa, Fla. He was 62.

His husband, Robert Schaublin-Yanes, said the cause was peritoneal cancer.

Before the 1980s, when Mr. Yanes (pronounced YAH-ness) arrived at Gourmet, food photography in cookbooks and magazines was typified by a lifestyle sensibility that placed a gauzy focus on everything but the food itself. Styling could be theatrical, lavish props were heavily used, and the finished photographs were seen as obligatory accompaniments to recipes. Mr. Yanes brought a sense of elegant realism to his craft, and he let his delectable subjects take center stage.

“I want the dish to be the star,” Mr. Yanes told Texas Monthly in 2006. “Everything else is secondary to that.”

With the artistry of a portrait photographer, Mr. Yanes imbued an air of refined desirability to string-tied roast turkeys, chocolate cakes, cups of melon balls, links of liverwurst and a raw scallop he presented so pristinely that its plump meat looked practically edible. In his studio in the Condé Nast building in Times Square, which adjoined the magazine’s test kitchens, Mr. Yanes photographed dozens of dishes per day. To better understand his subjects, he ate them.

One of his first Gourmet covers featured a trio of martini glasses containing fruity cocktails; he photographed from a low angle that gave them an almost noble appearance. His image of a mottled jar of skillet blackberry jam graced the cover of the August 2004 issue, evoking the messy joys of a summer snack. (That issue also contained David Foster Wallace’s landmark essay “Consider the Lobster,” in which he visited the Maine Lobster Festival and explored the morality of consuming the crustacean.) For the January 2000 issue, his painterly photograph of a plate covered with lush pomegranates became one of Gourmet’s best-known covers. It was typical of the publication’s visual signature under the lauded editorship of Ruth Reichl.

“I think my favorite cover we did was the pomegranate cover,” Ms. Reichl said in a phone interview. “I asked him, ‘Can you shoot some pomegranates for me?’ What he came back with stunned me. No one romanced food the way he did. He made food sexy and gorgeous. I don’t think anybody has ever done it quite the way he could.” 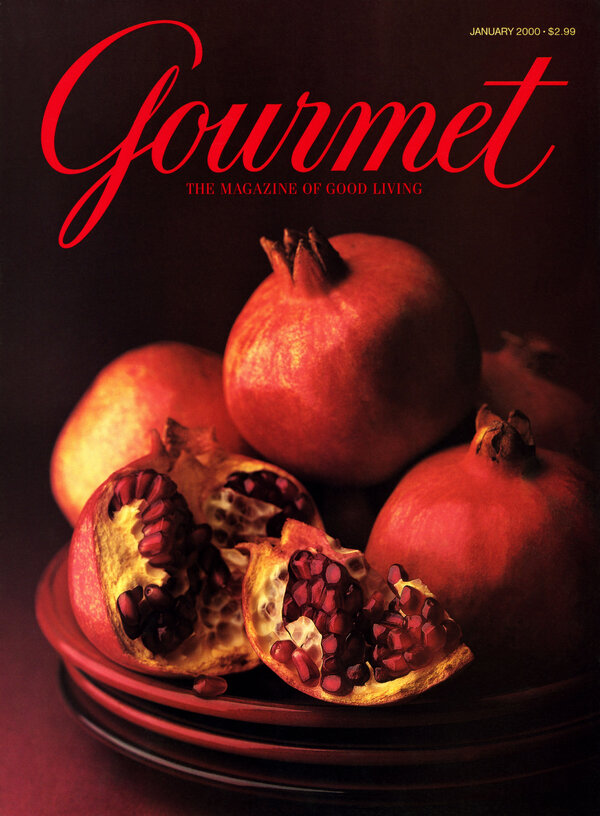 Gourmet won its first National Magazine Award in 2004 for general excellence, the competition’s highest honor. It won the award for photography the next year and again in 2008.

A 2007 profile of Mr. Yanes in the New Jersey newspaper The Record captured him in his element at his studio in the Condé Nast building as he photographed a bowl of ceviche. While his team surrounded him, he stood on a step stool with his camera facing downward on the ceviche. The photo would appear on Gourmet’s table of contents page a few months later.

“Is the napkin OK? Should it be bigger?” an associate art director asked him.

“Don’t worry about that,” he said.

Chopped cilantro was rushed to the scene to decorate the shot.

“You might want a whole piece of cilantro somewhere,” he directed. “Now it looks a little too choppy-chop.”

In 2017, Susan Bright’s “Feast for the Eyes: The Story of Food in Photography,” published by Aperture, placed Mr. Yanes’s contributions to food photography in historical context.

“Yanes’s photographs are highly attentive to textures in the food and have a sense of suspense — the food is about to be eaten or is in process: A piece is missing from the cake, the food’s in the pan, or a fork’s on the plate,” Ms. Bright wrote. “Everything looks delicious, but not out of reach, with a realism that taps into the eyes, mouth, brain and stomach.”

“With Yanes’s photographs,” she continued, “we can consume the food with our eyes and be completely satiated.”

Romulo Abraham Yanes was born on Feb. 17, 1959, in Fomento, Cuba. His father, Abraham, was an auto mechanic. His mother, Caridad (Nieblas) Yanes, was a seamstress.

When Romulo was 8 his family left Cuba through Freedom Flights, an airlift initiative that brought Cubans to the United States, and they eventually settled in Weehawken, N.J. He spent his adult life trying to replicate his mother’s ropa vieja and flan recipes.

He took a photography class in high school, and he found joy in the slow creative process that occurs within a darkroom. In the early 1980s, he studied photography at the School of Visual Arts in Manhattan, and after graduating he landed a job managing a photo studio.

He soon met Irwin Glusker, Gourmet’s art director, who invited him to work as an assistant for Luis Lemus, the magazine’s photographer. Mr. Yanes took the gig; when Mr. Lemus died a few months later, Mr. Yanes took his place. His first image for Gourmet was of a lettuce leaf.

In addition to his husband, Mr. Schaublin-Yanes, Mr. Yanes is survived by two sisters, Cira and Ana Yanes.

After Gourmet folded in 2009, Mr. Yanes transitioned to a busy freelance career, shooting for clients like Williams-Sonoma and The New York Times and magazines like Bon Appétit. He also illustrated numerous cookbooks. In 1998 he worked on “Cooking for Madam: Recipes and Reminiscences From the Home of Jacqueline Kennedy Onassis,” and in 2000 he contributed photography to Hillary Clinton’s “An Invitation to the White House.”

Today, with a steady hand and a slick Instagram filter, anyone can be a food photographer. But he mostly shrugged. He was taking food seriously at a time when Americans were just starting to think differently about their food. Gourmet’s two National Magazine Awards for photography attested to that.

Richard Ferretti, who became Gourmet’s creative director in 2003, recalled the suspense that ensued each time the magazine learned it was a finalist for the award, finding itself in competition with titles that included GQ, W, New York and National Geographic.

“Fashion photography and photojournalism were always the ones that got the most recognition,” Mr. Ferretti said in a phone interview. “That’s where you had all the big, famous photographers. But then food photography was shifting, and it became relevant.”

“Those publications were probably like, ‘How can we be competing against a food magazine?’” he continued. “We broke a barrier by winning. And suddenly, Romulo was one of those photographers.”