London: If you hadn't been looking for her, you would have missed her entirely.

Prince George and Princess Charlotte's nanny blended expertly into the background in St George's Chapel on Saturday, looking on from the sidelines as her little charges and their fellow bridesmaids and page boys performed their duties beautifully. But if Maria Borrallo hadn't been present in the chapel, there's a chance the ceremony might not have gone quite so smoothly. 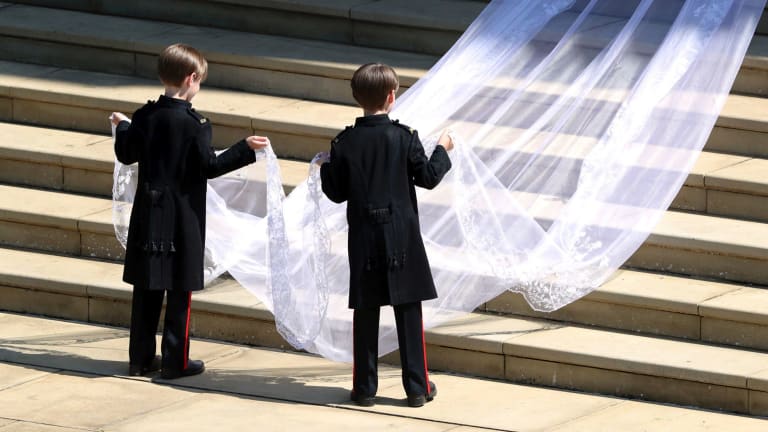 The boys are said to have been practising with a train (with mixed results) since Wednesday, learning how to keep the same pace as they walked down the aisle, when to pick up and put down the hand-embroidered silk and organza veil – which had been sewn with flowers from each of the 53 Commonwealth nations – and just how high to hold it up.

Would they step on it and tear it? Would they remember what to do when? Their mother, Megan Markle's best friend Jessica Mulroney, must have breathed a sigh of relief when her sons' duties were finally done. 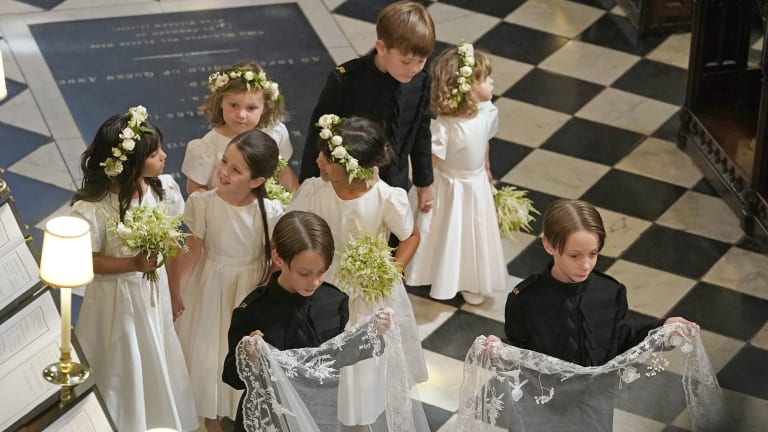 On their best behaviour.

One of the gap-toothed twins, Brian, stole the nation's hearts when he peeked out from behind the Duchess, his mouth dropping open in delight.

It provided the perfect photo opportunity which his father, Ben Mulroney, has hinted may have earned him a special reward. "Ok, Brian," Mr Mulroney wrote on Instagram. "You're getting a TV in your room for the summer."

While the boys were concentrating on their job, their little sister Ivy – along with Princess Charlotte, three, Prince George, four, Prince Harry's godchildren Jasper Dyer, six, and Florence van Cutsem, three, and the Duchess' god-daughters Rylan and Remi Litt, seven and six – were to wait in the wings before trotting after them. 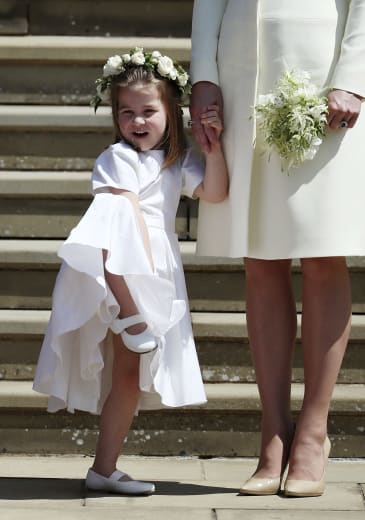 Princess Charlotte with the Duchess of Cambridge after the church service.

Borrallo, who has been with the family for four years, was on hand to keep the children in check on Saturday, doing such a brilliant job that many parents in the congregation commented that she must be "magic", and said they wanted to know "all her secrets".

By the end of the day, she had become known as "the child whisperer", so adept was she at keeping the children quiet and happy in the midst of the pomp and circumstance that threatened to overwhelm them.

Her secret? An insider says one of the techniques the nanny employed to get the children to stand nicely was the promise of Smarties.

And who could blame her? What person wouldn't behave with the possibility of handful of Smarties hanging in the balance? Whatever her technique, it worked – all 10 children executed their roles beautifully.

Usually sporting the traditional Norland uniform of a brown 1950s-style nurse's dress, white gloves, brown brogues and a brown bowler hat, Borrallo was able to blend in on Saturday in a simple navy dress, eschewing her uniform for the day.

Borrallo, who was appointed by the Duke and Duchess in 2014, has often been called upon to be on hand at royal occasions. She lives with the family at Kensington Palace, and travels with them and will have been invaluable in the past month as the Cambridges adjust to life with their new arrival, Prince Louis. She certainly performed admirably on Saturday.

In fact, the Duchess of Cambridge ought to watch out – Borrallo could be getting a call from one or two Hollywood mothers in the coming days.