Washington: If you were writing the script for a lavish television series about a tense high-level meeting between two rival superpowers you could not pick a more metaphorically apt setting than Anchorage, Alaska.

Blanketed with snow and with temperatures below zero, the site of the first meeting between US and China officials since Joe Biden’s inauguration seemed designed to highlight the frosty relationship between the two countries. 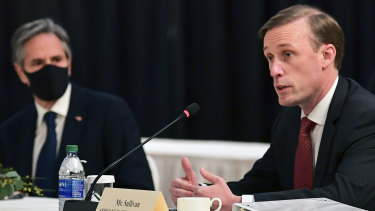 In the lead up to the talks at the Hotel Captain Cook, which began on Friday (AEDT), both sides downplayed expectations of any kind of diplomatic breakthrough or reset in the bilateral relationship.

American officials warned reporters not to expect any major announcements or even a joint statement at the conclusion of the talks.

Meanwhile, China’s ambassador to the US cautioned: “When its core interests are involved, China has no room to back down.”

It turned our the first day of talks was far more acrimonious than anyone anticipated. 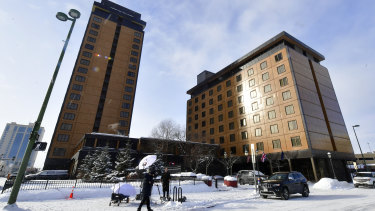 A chilly setting for chilly talks: The Captain Cook Hotel in Anchorage, Alaska.Credit:AP

The spat showed both US and China are trying to project strength to the rest of the world. They’re also aware that beating up on the rival nation makes for good politics at home.

A poll released by Pew Research earlier this month showed favourable views of China in the US have fallen to a historic low of 20 per cent.

Such anti-China sentiment is why Donald Trump made Biden’s supposed softness on China a central plank of his re-election pitch.

Trump’s campaign nicknamed his rival “Beijing Biden” and painted him as “China’s puppet” in its television advertisements.

“Joe Biden won’t stand up to China,” one of the Trump campaign’s advertisements said. “He never has. He never will.”

Going toe-to-toe with their Chinese counterparts in Alaska is a useful way for Biden’s team to dispel the notion that they will go easy on Beijing.

If anything, the US and China relationship may well be even more acrimonious under Biden than his predecessor.

Trump was surrounded by anti-China hawks but his frustrations with China revolved almost entirely around trade. He wanted to stop China from “ripping” off America economically but he had little personal interest in Beijing’s human rights violations.

By contrast, the Biden administration has a “litany” of complaints about China – including its treatment of allies such as Australia.

There’s still another day left in the Anchorage talks, meaning the two sides have time to find some areas of common ground.

But while spring may be around the corner in America, there’s no sign a thaw in the US-China relationship is coming any time soon.