Runner, 25, completes the London Marathon with a BROKEN ankle after wrapping leg in bandages while still 18 miles from finish… and hobbles over line in just over six hours

A woman ran 18 miles of the London Marathon with a broken ankle and crossed the finish line with her leg wrapped in bandages.

Siobhan O’Keeffe, 25, broke her ankle after eight miles and completed the remaining 18 – taking more than four hours – with her fibula bone snapped in half.

Miss O’Keeffe, a recruitment consultant, incredibly managed to complete the London Marathon despite snapping her ankle less than a third of the way through the race.

She fought back the tears and battled on through excruciating pain to finish the race in just over six hours.

But that was after the plucky runner had to stop after eight miles to get her ankle bandaged up by first aiders. 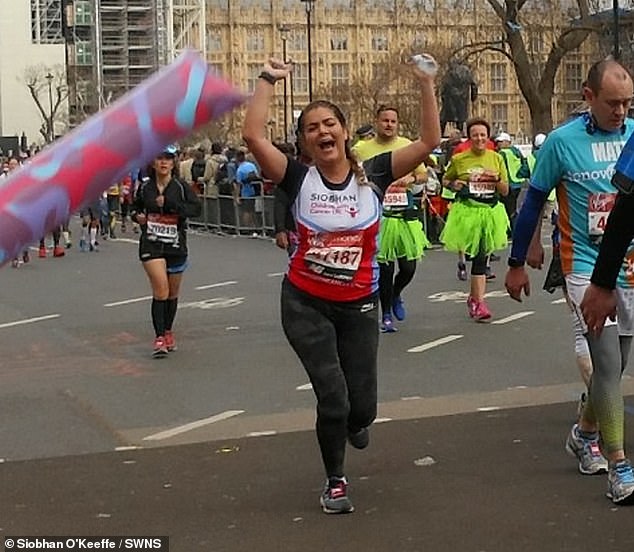 Siobhan O’Keeffe, 25, completed the London Marathon with a broken ankle after getting injured eight miles into the race. She is pictured near the end of mile 25 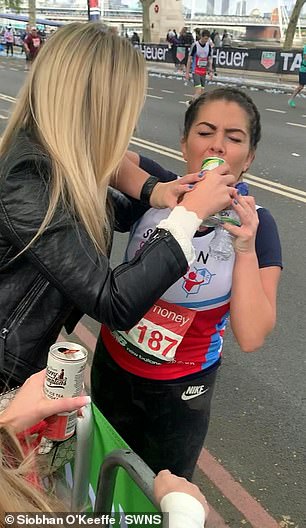 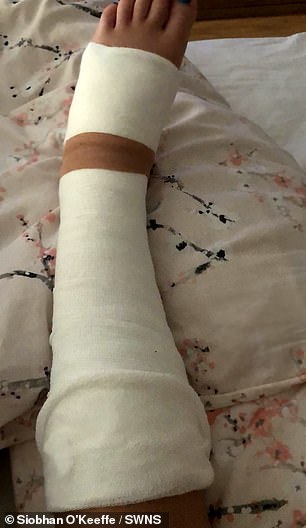 Miss O’Keeffe, of Surrey, struggled through the race to the finish line and doctors said afterwards they had no idea how she managed it. Her left leg has since been put in a cast

Miss O’Keeffe, of Sunbury-on-Thames, Surrey, said: ‘It started hurting after about four miles but it just got worse and worse.

‘I had to stop after eight miles. It felt bruised and really heavy, I thought it was sprained. I didn’t think it’d be possible to run on a broken ankle.

‘The pain was unbearable but all I wanted to do was finish. I had tears in my eyes. The adrenaline just kicked in.’

Miss O’Keeffe said she was forced to stop when she came across St John’s Ambulance medics.

She says the lower part of her leg was swollen and red, and she was told to stop running by first aiders.

But the determined runner, who was participating in aid of the Children With Cancer charity, said dropping out of the race was never an option. 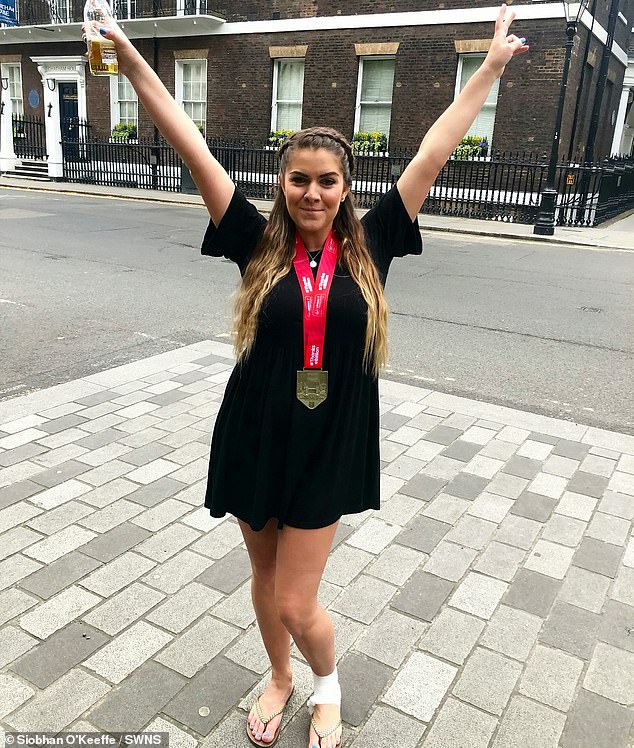 The runner has raised £6,000 for the Children With Cancer charity and said dropping out ‘was not an option’ 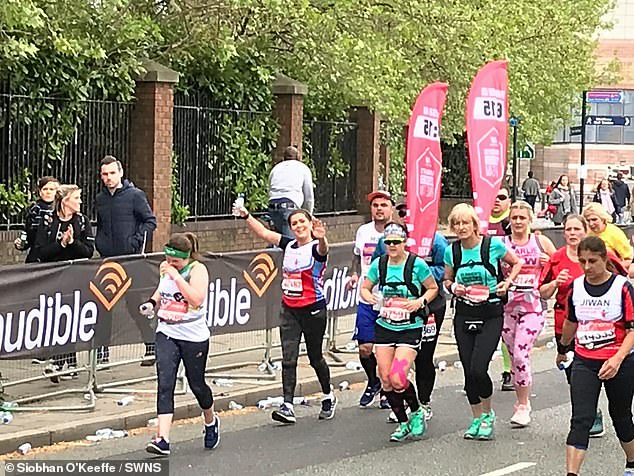 Miss O’Keeffe, pictured at mile 17, said she was spurred on by running with pacers and a big group of people

She has raised £6,000 for the charity with her work colleague, Sarah Hopkins, 32, and with her ankle now wrapped in bandages, picked herself up and started running again.

Miss O’Keeffe, who initially wanted to complete the marathon in around five hours, said: ‘The St. John’s Ambulance people said “Maybe you should stop now”.

‘But I needed to get to the end. All of my family were there and I was running for charity. I didn’t want to let anyone down.

‘The pain was really bad. I had to walk a bit but did carry on running. I ended up running with the a pacer.

‘I was in a group of people and that really helped me along. I knew I wasn’t going to get the time I wanted so I just ended up wanting to finish at all.

Miss O’Keeffe had spent four months training her body to run the marathon on Sunday.

She said she had nailed her race preparation and was buzzing with excitement on the start line of one of the world’s most famous races.

But her once-in-a-life-time marathon experience has now been ‘overshadowed’.

She added: ‘Running was just agony. I can’t explain how much it hurt.

‘I joked with another runner that if felt as though I was running on a broken ankle.

‘I feel like I have unfinished business with the marathon. I did say never again when I finished but I’ll never say never.’

Miss O’Keeffe said the pain never went away and was only temporarily numbed by the roar of the crowds as she ran down The Mall towards the finish line. 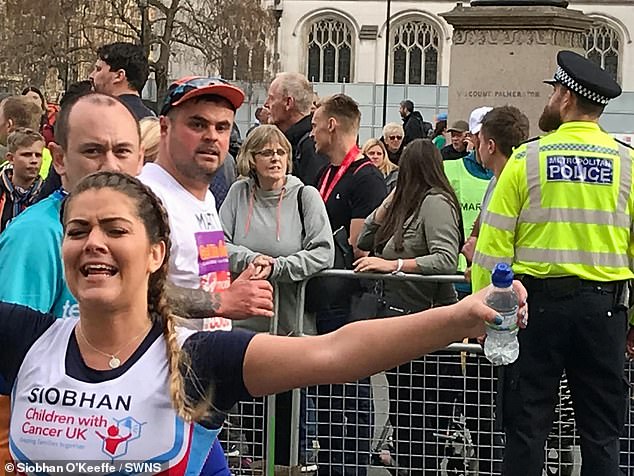 The 25-year-old, pictured at mile 20, went out after the race to celebrate and said she woke up the next morning ‘in agony’

But even after picking up her finisher’s medal she didn’t go to A&E until the next morning.

Miss O’Keeffe celebrated that night with her family and even went to sleep with her ankle still broken – before waking up at 2am in ‘agony’.

She then went to A&E at West Middlesex Hospital in the early hours of Monday morning where she was taken for an X-ray which revealed her fibula bone has snapped near her ankle joint – leaving doctors baffled at how she managed to complete the race.

Miss O’Keeffe said: ‘The orthopedic surgeon said he had no idea how I ran with it. He said it was a trauma break. He couldn’t believe it.

‘Everyone at hospital said I’m amazing for what I did. No one can believe it.’

Her ankle is now encased in a cast and she will find out on Friday if she needs an operation.

If not, she will need to wear the cast for up to six weeks but her recovery may go on for longer if surgery is required.