Move is in retaliation for wave of ejections of Russian officials after alleged poisoning on ex-spy and daughter. 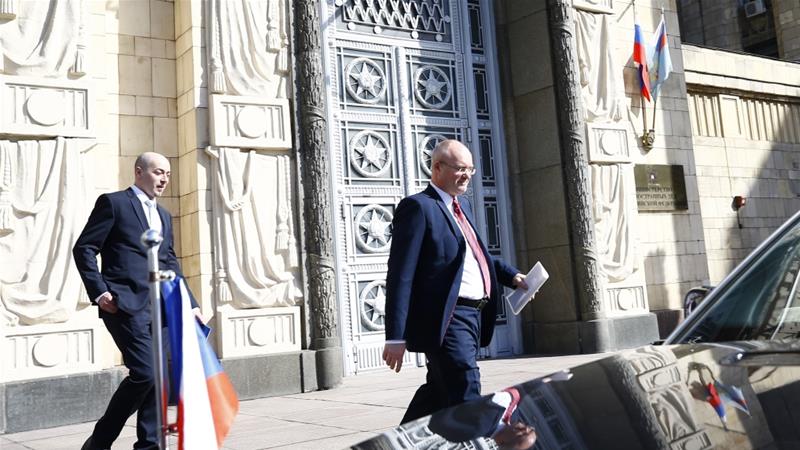 Russia has expelled 59 diplomats from 23 countries as the dispute over the poisoning of a former spy and his daughter in Britain worsens.

The move on Friday was in retaliation for the wave of ejections of Russian officials after what the UK and its allies alleged was a nerve agent attack on Sergei and Yulia Skripal in the southern English city of Salisbury.

It came a day after Moscow ordered the expulsion of 60 US diplomats in response to a similar move by Washington earlier this week.

Russia on Thursday also revoked the permit for the US consulate in St Petersburg – meaning it must shut down – and issued a protest note to the US Ambassador to Moscow, Jon Huntsman, regarding what it called “outrageous and unwarranted” diplomatic action against Russia.

Russia has already retaliated in kind against the UK for expelling 23 diplomats over the first known use of a military-grade nerve agent in Europe since World War II.

Over the past few days, 25 European countries – along with the US, Canada, and Australia – expelled more than 120 Russian diplomats in a show of solidarity with the UK after the alleged attack.

NATO also announced seven officials working in the Russian mission to the alliance will have to leave.

On Friday, senior envoys from most of the countries that have expelled Russian diplomats were summoned to the Russian foreign ministry, Al Jazeera’s Rory Challands, reporting from Moscow, said.

“What we are seeing here is the worsening of diplomatic relations, a tit-for-tat response,” added Challands, describing the crisis as “severe”.

“Its catalyst has been the Skripal affair but, of course, there is so much else behind all this, so much that’s gone on over the last few years – with the Russian campaign in Syria, with what’s been going in Crimea and Ukraine, that has worsened relations between the West and Russia.”

UK Prime Minister Theresa May has said she has evidence of Russian involvement in the poisoning case.

Yulia is no longer in a critical condition and is improving rapidly, doctors said on Thursday. Sergei remains in critical but stable condition.

Britain’s government says the nerve agent used in the attack, Novichok, was developed in Russia. Moscow has denied accusations that it was involved in the assassination attempt.