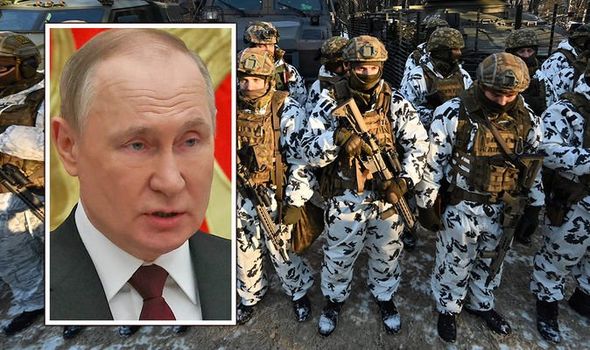 Tensions between Moscow and Kiev have reached boiling point over recent months. In September, Ukrainian President Volodymyr Zelenskiy warned an all-out war with Russia could be a “possibility”.

Since 2014, more than 14,000 people have been killed in the conflict in eastern Ukraine.

According to reports Moscow’s commanders have ordered large amounts of multi-launch rocket systems to be transported into Belarus which could be used for an invasion.

Another official warned Kiev could fall “within days” if Russia launches a full-scale invasion.

Russia has denied planning to invade Ukraine but has tens of thousands of troops near its neighbour’s borders.

This prompted the US to order about 3,000 extra troops to bolster NATO’s eastern flank in Poland and Romania.

NATO has already deployed four multinational combat units with some 5,000 troops in total in Poland, Lithuania, Latvia and Estonia.

They were sent there in response to Moscow’s annexation of the Crimea region from Ukraine in 2014.

These so-called NATO battlegroups, led by the United States, Germany, Canada and Britain, are meant to stall an attack in the region and buy time for additional NATO troops to reach the frontline.

Two US officials said on Saturday that Russia has in place about 70 percent of the combat power it believes it would need for a full-scale invasion of Ukraine.

German Defence Minister Christine Lambrecht ruled out supplying Kiev with arms, after Ukraine’s embassy in Germany sent a list with specific requests to the foreign and defence ministries in Berlin.

One woman, Mariana Zhaglo, said she is willing to do whatever it takes to defend her country.

Ms Zhaglo – who was photographed holding a huge rifle – told the Times: “As a mother I do not want my children to inherit Ukraine’s problems, or have these threats passed on to them.

“It is better that I deal with this now.

“If it comes to it then we will fight for Kiev; we will fight to protect our city. If there is a need for the shooting to start, then I’ll start shooting.”

Explaining how the Zbroyar Z-15 is a hunting rifle, she said she has no intentions of hunting.

French President Emmanuel Macron became the latest Western leader to vow to retaliation if Russia proceeds with an invasion.