Russia’s coronavirus cases rose by 12,846 on Saturday, a new daily record since the start of the outbreak early this year.

The latest figures pushed the overall total number of infections in the country to 1,285,084. The previous record of 12,126 new cases was registered on Friday.

The nation of more than 144 million people has the fourth-highest number of COVID-19 cases, behind only the United States, India and Brazil. 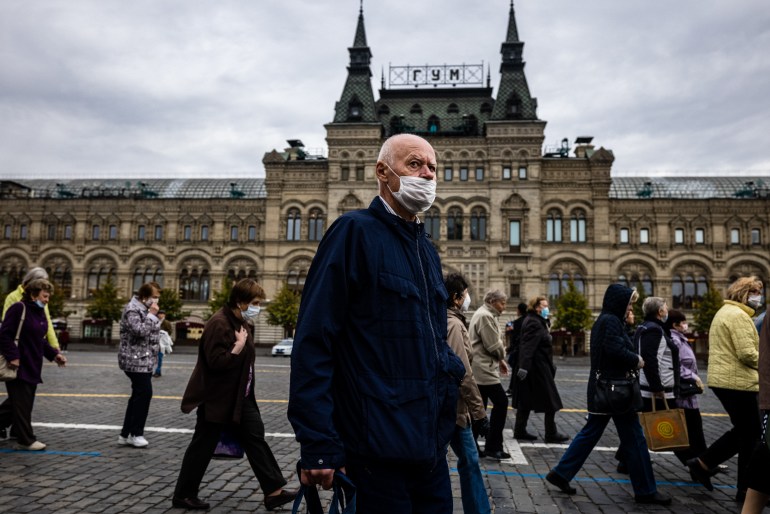 A man wearing a face mask to protect against the coronavirus disease walks on Red Square in front of the GUM department store in central Moscow [Dimitar Dilkoff/AFP]Russia had imposed one of the most severe nationwide lockdowns at the beginning of the pandemic. Non-essential businesses were shuttered and Moscow residents were only permitted to move freely with official digital passes.

But most restrictions were lifted ahead of a large second world war military parade in June and a nationwide vote on amendments that paved the way for President Vladimir Putin to remain in power until 2036.

Moscow’s Mayor Sergei Sobyanin has ordered the elderly and vulnerable to stay at home and told employers to keep at least a third of staff working remotely, while mask-wearing remains compulsory on public transport and inside shops.

According to the Moscow Times, those working in the medical and defence industries will be exempt from the new guidelines.

The Kremlin on Friday said if the situation continues to deteriorate, it will “require some actions, decisions”.

European leaders across the continent are scrambling to amend virus regulations against the backdrop of a surge in new cases. Even Germany, which was praised for its early handling of the pandemic, has suffered a large increase in new infections.

Russia announced in August it had registered the world’s first coronavirus vaccine, named Sputnik V after the Soviet-era satellite. A number of officials said they had volunteered for inoculation, including Defence Minister Sergei Shoigu.

Putin this week said “around 50 people” in his inner circle, including staff and family, had been vaccinated.