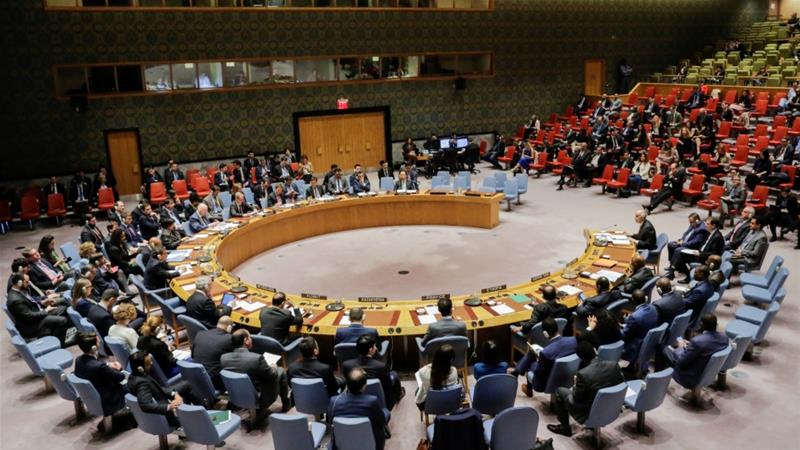 The UN Security Council has held an emergency meeting called by Russia to discuss what it describes as a threat to international peace from potential US military action in Syria.

Russia’s ambassador to the UN said during Friday’s session that its specialists found no traces of “toxic substance use” in Douma, the largest town in the Eastern Ghouta region near Syria’s capital Damascus, after a suspected chemical attack hit the area.

Vassily Nebenzia said Russia had “clear evidence” that the incident was staged, referring to the suspected chemical attack that killed at least 85 people in Douma on April 7.

The comments came as Igor Konashenkov, Russia’s defence ministry spokesman, said in a televised appearance that his country had “evidence” the UK was involved in organising the chemical attack in Douma.

“We have evidence that proves Britain was directly involved in organising this provocation,” he said.

Speaking at Friday’s meeting in New York, Nebenzia said the US “threat” to use force in Syria constituted a breach of international law.

He described the actions of the US as “reckless”, accusing it of infringing on the sovereignty of states by threatening military action and of being “unworthy” of a permanent seat on the Security Council.

“The sole thing they [the US, France and the United Kingdom] have an interest in is to oust the Syrian government … and contain the Russian Federation,” Nebenzia said.

The meeting was one of several emergency Security Council sessions convened on Syria to discuss the suspected chemical attack.

President Donald Trump had warned that the US might take military action in Syria in response to the alleged chemical attack.

Russia and the Syrian government denied using chemical weapons in their fight against rebels in Eastern Ghouta, which began on February 18 when they launched a major offensive.

Russia had previously said it would respond to any US missiles fired in Syria by shooting them down and targeting their launch sites.

In her speech, Nikki Haley, US ambassador to the UN, said the Trump administration believes Syrian President Bashar al-Assad’s forces used chemical weapons at least 50 times during the seven-year conflict.

“Our president has not yet made a decision about possible action in Syria. But should the United States and our allies decide to act in Syria, it will be in defence of a principle on which we all agree,” she said referring to US allies.

“All nations and all people will be harmed if we allow Assad to normalise the use of chemical weapons.”

Shortly before the UN meeting convened, Haley told reporters that the US, UK and France had “analysed” the situation and concluded that a chemical attack did take place on Douma earlier this week.

The US-Russia war of words comes as the world’s chemical weapons watchdog begins investigating the incident in Syria.

The Organisation for the Prohibition of Chemical Weapons (OPCW) said on Thursday it had deployed two fact-finding teams to Douma.

In her speech at the Security Council meeting, Karen Pierce, British ambassador to the UN, acknowledged the importance of the OPCW’s probe and said that what happened in Syria was a violation of the UN charter.

She also said Russia’s involvement in Syria was not helping to revive the Geneva peace track – which is what the UK would “continue to do”.

Her remarks came a day after British media reported that the UK cabinet had agreed “on the need to take action” in Syria.

Referring to the Salisbury case, in which a former Russian spy and his daughter were poisoned by a nerve agent in southern England last month, Pierce said her government had no “quarrel” with the Russian people, but it was Russia’s “own actions that have led to this situation”.

For his part, Francois Delattre, France’s ambassador to the UN, said the Syrian government had reached a “point of no return” by deciding to use chemical weapons.

He called on the world to provide a “robust, united and steadfast response”.

“France will shoulder its responsibility to end an intolerable threat to our collective security,” Delattre said.

A day earlier, French President Emmanuel Macron said his country had proof that the Syrian government launched the gas attacks.

In his speech, Bashar al-Jaafari, Syria’s UN ambassador, said his country would have no option but to defend itself in case “the West launches a military attack”, adding that “this is not a threat; this is a promise”.

Referring to Haley’s charge that the Syrian government had used chemical weapons 50 times, he said US experts had confirmed there are no chemical-weapon stockpiles in Syria.

“Is this how the White House strategises? How is this possible?” al-Jaafari said.

“Her own country has destroyed our stockpiles in the Mediterranean. Could they have simply forgotten all of this?”

He said the potential target of any attack would not be the “vile terrorists” in Douma who were “chased out” to the north, but “the state of Syria”.

According to al-Jaafari, “this is the topic that should be discussed today.”

Earlier during the session, Antonio Guterres, the UN secretary-general, warned that a “cold war” was back and the tools to address it were no longer present.

The Middle East is in “chaos”, he said, adding that Syria represented the most “serious threat” to international peace and security.

“There is no military solution to the conflict.”

The chemical attack in Douma, if confirmed, would be the largest of its kind in Syria since April last year, when sarin or a sarin-like substance was dropped on the town of Khan Sheikhoun, killing at least 85 people.

Days later, the US launched a retaliatory missile attack against a Syrian airbase from where it alleged the attack had been launched. 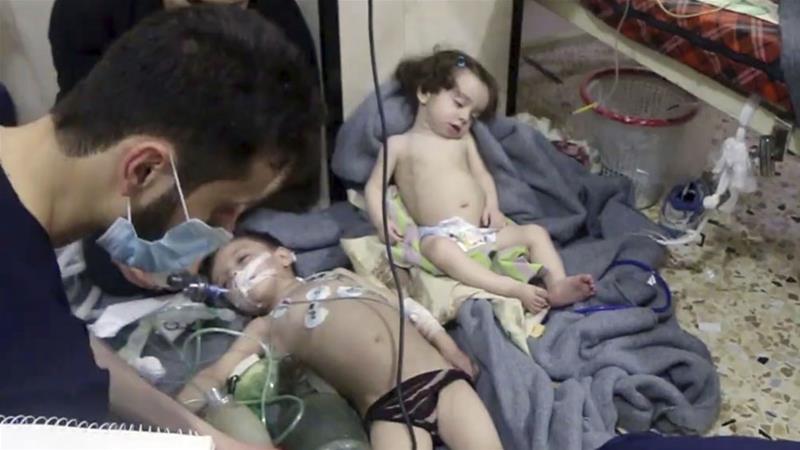 How can chemical attacks in Syria be stopped?