Russian mercenaries with ties to Moscow’s spies have increased their presence in Ukraine in recent weeks, stoking fears among some NATO members that Putin could try to engineer a pretext for an invasion, three senior Western security sources said.

They said their concerns had strengthened in recent weeks that a Russian incursion into Ukraine could be preceded by an information war and cyber attacks on Ukraine’s critical infrastructure such as electricity and gas networks.

Russia could also use the mercenaries to sow discord and paralyse Ukraine through targeted assassinations and the use of specialised weaponry, the sources said. 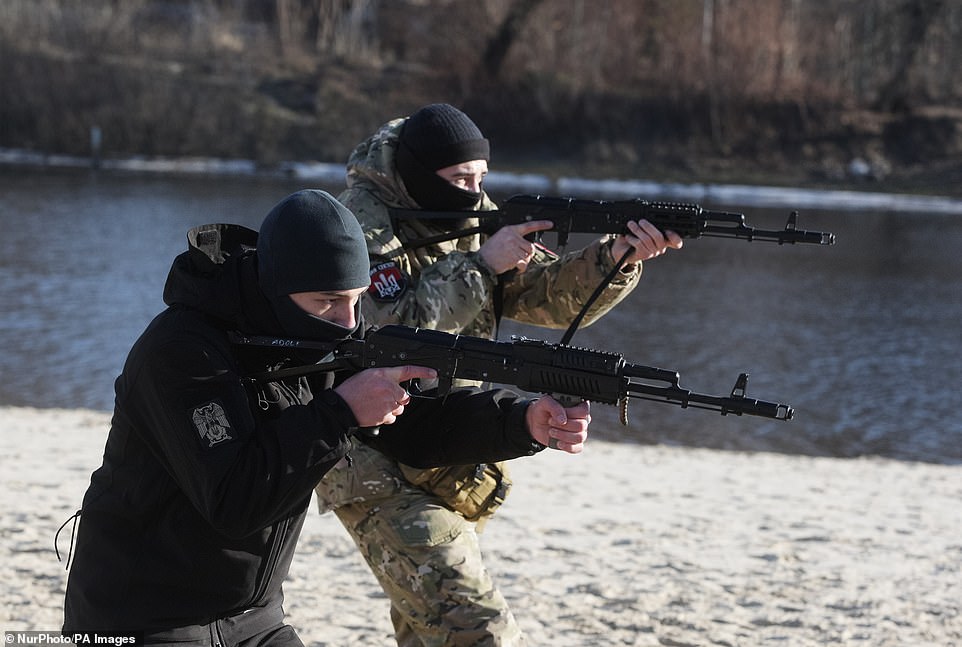 Civilians attend a military exercise for territorial defense amid the tension on the border with Russia, in Ukrainian capital Kyiv, Ukraine on Sunday 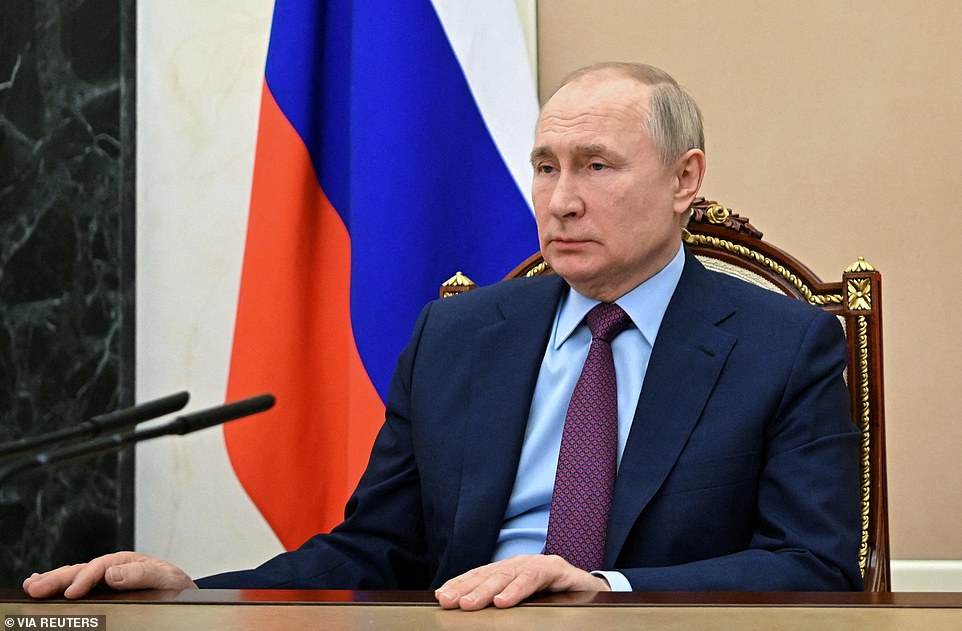 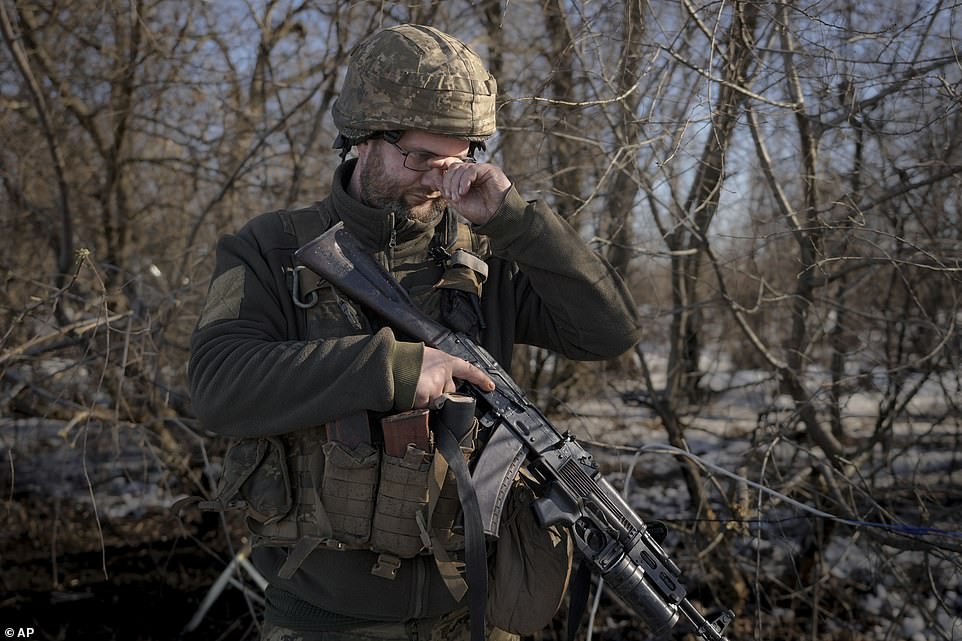 A Ukrainian serviceman adjusts his glasses at a frontline position, outside Popasna, Luhansk region, eastern Ukraine on Monday

The United States warned again on Sunday that Russia could stage a ‘false flag’ operation inside Ukraine to justify an invasion.

‘It is likely that Russian mercenaries, under the direction of the Russian state, will be involved in any hostilities in Ukraine, potentially including a pretext for an invasion,’ said one Western security source, who spoke on condition of anonymity.

It came after the entire Ukraine National Police force was placed on ‘combat alert’ tonight amid fresh fears that Russian mercenaries run by Moscow were planning a ‘false flag’ pretext for an invasion. 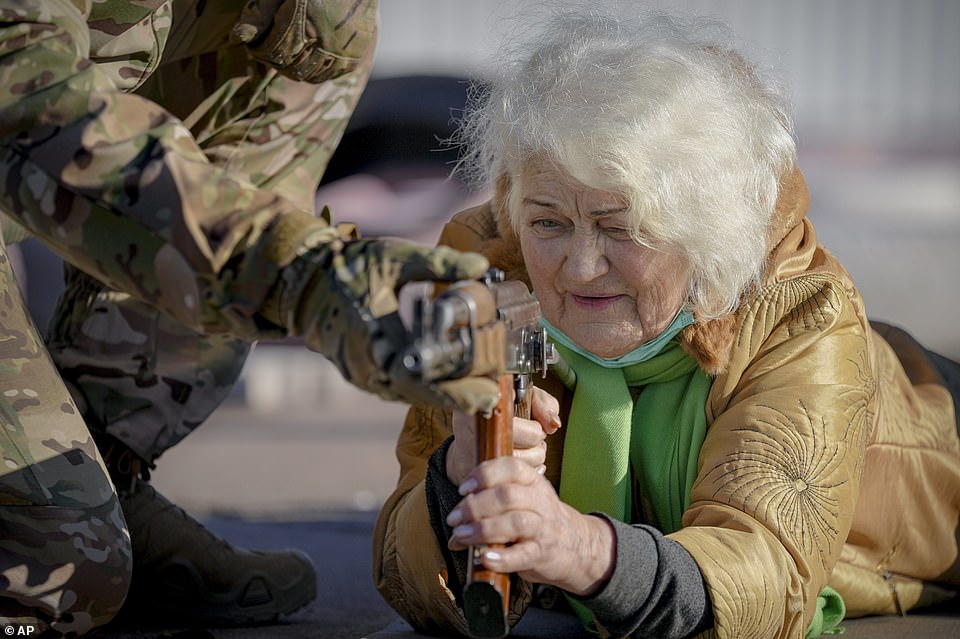 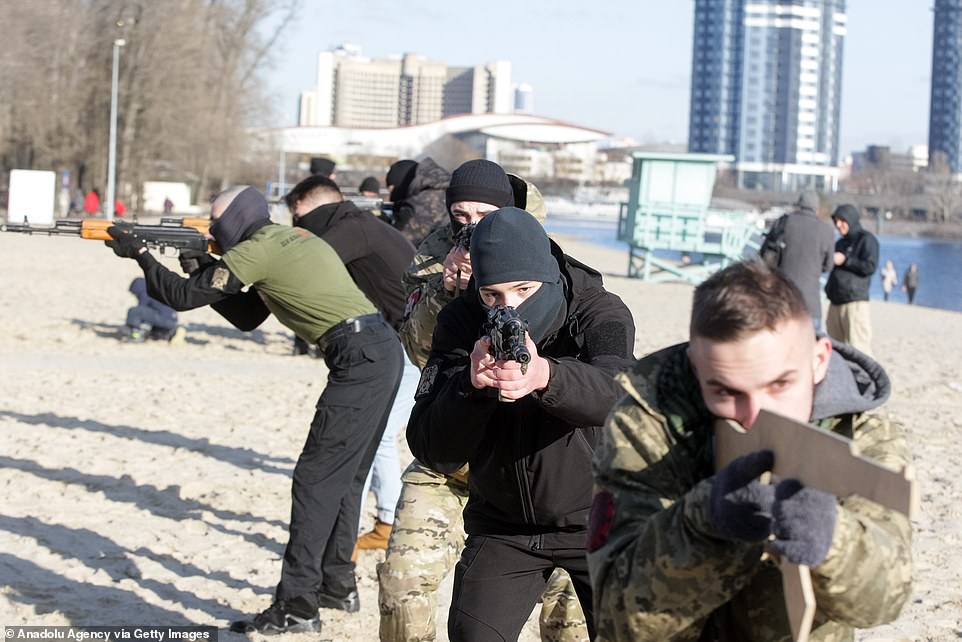 Ukraine’s nationalists under the ‘territorial defense’ hold a military and other training for civilians in preparation for any possible hitches amid an escalation of tensions in Kiev, Ukraine yesterday

Senior western security sources said they suspect the first stage of a Russian incursion would be a ‘hybrid war’ of disinformation, cyber attacks and sabotage of Ukraine’s critical infrastructure such as electricity and gas networks.

Meanwhile, chief of the Ukraine’s police, Ihor Klymenko, announced the heightened alert status for his 120,000 officers – initially until February 19 – saying: ‘The strengthened police regime is not an additional reason for panic. It is about protection and full readiness.’

Russia could use the renegade fighters with links to their Kremlin spymasters to sow discord and paralyse Ukraine through targeted assassinations and the use of specialised weaponry, sources told Reuters. 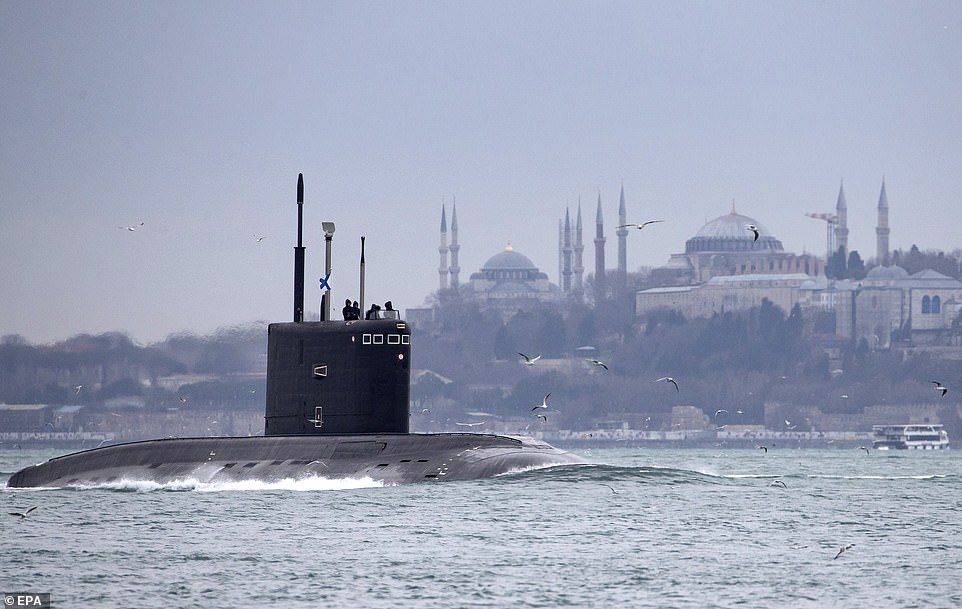 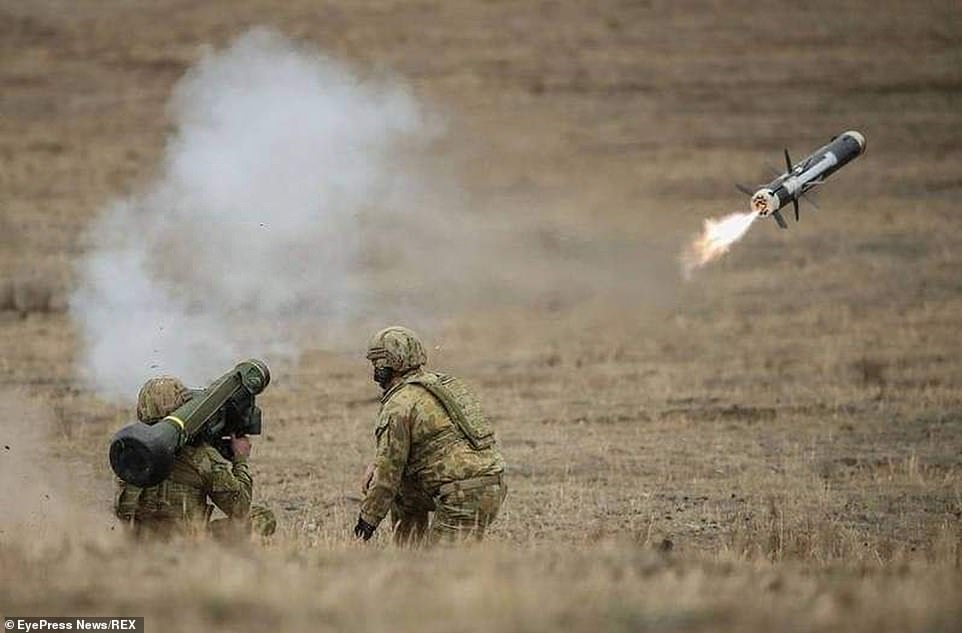 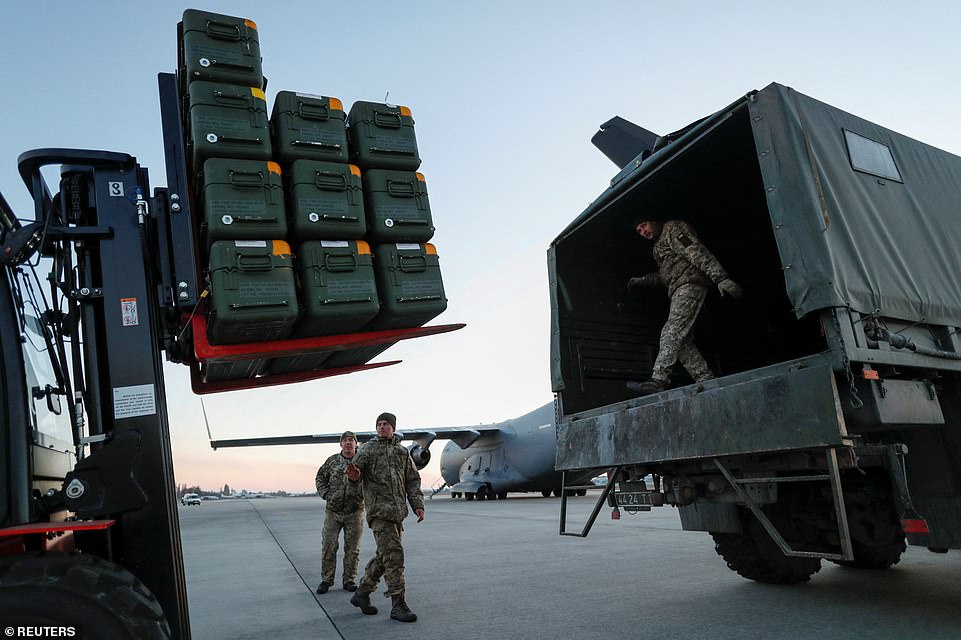 Lithuania’s military aid including Stinger anti-aircraft missiles, delivered as part of the security support package for Ukraine, is unloaded from a C-17 Globemaster III plane at Boryspil International Airport

The Pentagon last night warned that an hour-long phone call between President Joe Biden and Vladimir Putin failed to yield a breakthrough as he warned ‘major military action could happen any day now.’

Defense Department Spokesman John Kirby told Fox News that the leaders’ call on Saturday was ‘certainly not a sign that things are moving in the right direction.’

On Sunday, President Biden held talks with Ukrainian President Volodymyr Zelensky, vowing that the US and allies would ‘respond swiftly and decisively’ in the event of any further Russian incursion.

But Mr Zelensky has sought to play down the threat over the weekend, saying: ‘The best friend of our enemies is panic in our country. And all this information is just provoking panic and can’t help us.’

The White House said Biden ‘reaffirmed the commitment of the United States to Ukraine’s sovereignty and territorial integrity.’

It added: ‘President Biden made clear that the United States would respond swiftly and decisively, together with its Allies and partners, to any further Russian aggression against Ukraine.

‘The two leaders agreed on the importance of continuing to pursue diplomacy and deterrence in response to Russia’s military build-up on Ukraine’s borders.’

The Western security sources said mercenaries were deploying from Russian PMCs with close ties to the FSB, the main successor to the Soviet-era KGB, and the GRU military intelligence agency.

Among those deployed in recent weeks was a former GRU officer who also worked in the Wagner mercenary group. The former officer has gone to Donetsk, one of two regions in eastern Ukraine controlled by pro-Russian separatists since 2014, the sources said.

The Kremlin claimed that Russia was not strengthening its presence on Ukrainian territory and that Russian troops had never been present there and were not now.

The Russian Defence Ministry declined to comment when asked in writing on Friday about the Western allegations.

Some some operatives of the Wagner mercenary group have been embedded on the Ukrainian border after training at a GRU base near the southern Russian city of Krasnodar, according to the sources.

Reuters was unable to independently verify the information about the activities of Russian mercenaries in eastern Ukraine.

Other Russian mercenary groups linked to the FSB and GRU have also increased their activities in Ukraine since the start of the year, the sources said.

Reuters could not reach the mercenary groups in Ukraine for comment.

The United States has expressed fears that Russia could use mercenaries, special operations forces and other grey-zone warfare techniques to delegitimize Kyiv ahead of invasion, according to US officials.

Pentagon spokesman John Kirby said earlier this month that Russia was seeking to fabricate a pretext for an invasion.

Russian President Vladimir Putin has said Wagner and other private groups neither represent the Russian state nor are paid by it, though he says they have a right to operate provided they do not break Russian law.

The EU imposed sanctions on Wagner last year, accusing it of fuelling violence, looting natural resources and destabilising countries around the world.

Russia denies it plans to annex another part of Ukraine and Putin says the West is sowing hysteria in a crude attempt to lure Russia into war after ignoring the Kremlin’s concerns about NATO enlargement after the Cold War.