Russian opposition leader Alexei Navalny is being treated in hospital after suffering an acute allergic reaction while in prison, his legal team said.

Mr Navalny was jailed this week for 30 days after calling for unauthorised demonstrations in Moscow to protest against the exclusion of opposition candidates from local elections later this year.

Police acknowledged arresting more than 1,000 people during Saturday’s protests – one of the biggest crackdowns in recent years against the opposition.

Mr Navalny’s spokeswoman Kira Yarmysh said he had been transferred to hospital on Sunday morning after developing “severe swelling of the face and skin redness”.

Ms Yarmysh said it wasn’t clear what had caused the allergic reaction and that Mr Navalny had never suffered from a similar reaction in the past.

She said he had developed “an acute allergic reaction to an unknown allergen” and stressed that Mr Navalny had no known allergies.

This is the latest short stint in jail for Mr Navalny, who has regularly criticised the Kremlin and described the country’s main party, United Russia, which is led by President Vladimir Putin, as a “party of crooks and thieves”. 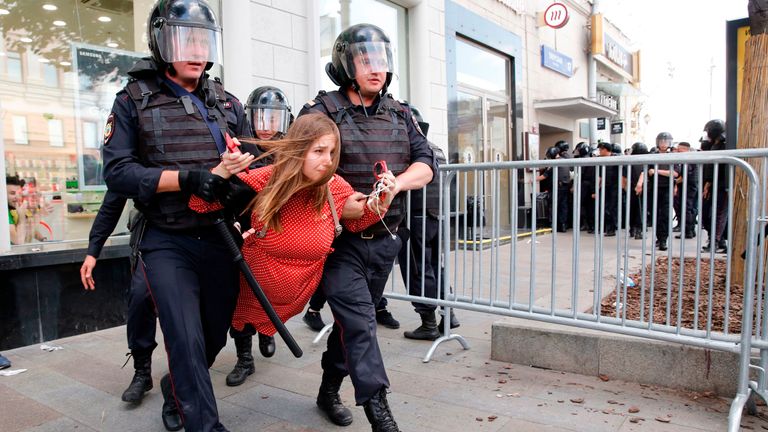 The UK’s Foreign Office said: “We are concerned by the detention on 27 July of over a thousand protesters, including journalists and prominent opposition figures, a significant use of force during a peaceful demonstration in Moscow.

“The Russian government continues to disregard the rights of its people to freedoms of expression, association and peaceful assembly.

“We call for the Russian government to comply with its international commitments on human rights in the Council of Europe and the Organisation for Security and Co-operation in Europe.”

Authorities in Moscow say the opposition candidates were barred from taking part in city council elections because they had failed to collect enough genuine signatures backing them. The candidates say this claim is false.

Relations between the UK and Russia have been fraught following a chemical weapon attack in Salisbury which the British government said was conducted in an attempted assassination by the Russian state.

The attack targeting former Russian intelligence operative Sergei Skripal was conducted with a nerve agent which had been developed by the Russian chemical weapons institute.

Moscow has denied the accusation.