Putin’s brainwashing of the innocents begins: Teachers ‘given propaganda manuals’, warned to tell children as young as 11 the Kremlin is on a ‘special peacekeeping mission and Nato poses a danger to Russia’ as parents are told to monitor TikTok

Russia’s ministry of education will today give school pupils across the country an online lesson, propagating the claim that Nato poses a danger to the Kremlin as Vladimir Putin ramps up his efforts to brainwash children as young as 11.

The President has been desperately trying to control the narrative in his homeland as the war in Ukraine enters its second week.

Teachers have reportedly been given manuals, which demand they describe the bloody invasion as ‘a special peacekeeping mission’.

Russia has already banned use of the words ‘invasion,’ ‘offensive’ and ‘declaration of war’ in the media, while reporters are also prohibited from mentioning civilian deaths caused by the conflict.

Manuals have been distributed throughout the school system, instructing teachers to tell students that Ukraine did not exist as a nation until the 20th century, and that it suffered a bloody coup in 2014, which resulted in the installation of an American puppet regime, Al Jazeera reports. 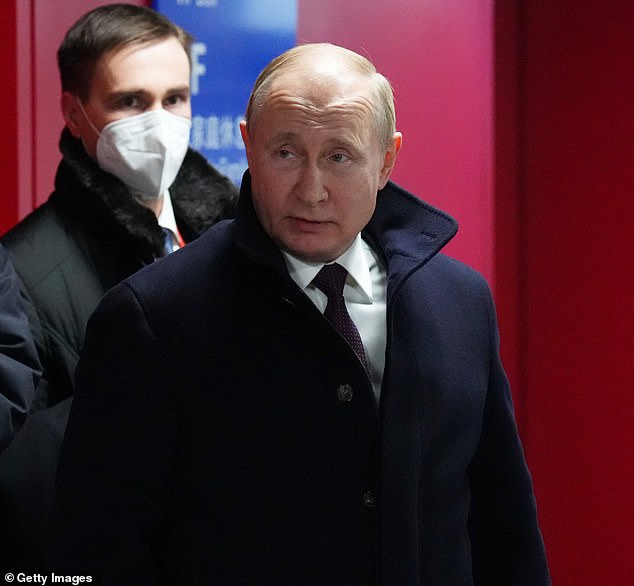 The unfounded propaganda then claims Donetsk and Luhansk, recently recognised as independent by Putin, rose up against the ‘coup’, and were subjected to a ‘genocide’ for eight years.

Russia has therefore stepped in to carry out a ‘special peacekeeping mission’, the manual dictates.

Further details include claims that Russian security concerns over Nato have been ignored by Washington and fears of Ukraine’s capacity to build nuclear weapons.

A source told Al Jazeera that teachers are being given no choice but to carry out these lessons in the framework of history or social studies, and provide proof they are doing so.

The source added that the opinions among teachers vary depending on their age, but even among those who generally support Putin there are those who are horrified by the war.

Furthermore, teachers have received letters from school, warning them to monitor their children’s activities on social media platforms such as TikTok.

Kremlin chiefs claim they may be encouraged to use the hashtag #нетвойне (‘no to war’) and be drawn into ‘unsafe’ protests.

There are also ‘warnings’ that children may also be exposed to ‘suicide flash mobs, detailed instructions on gender reassignment, and promotion of same-sex relationships’, it is reported.

It comes as the United States accused Russia of launching a ‘full war on media freedom and the truth’ by blocking independent news outlets and preventing Russians from hearing news of the invasion of Ukraine.

Russians also used social media to connect to each other and the outside world, it added.

Yesterday, a Russian opposition politician shared heart-rending images of children detained in the back of a police van after taking part in anti-war protests.

Despite the Kremlin having no tolerance for dissent, protesters have defied Moscow and taken to the streets against President Putin’s illegal war in Ukraine, risking jail and even treason charges.

Almost 7,000 people have so-far been detained by Russian police in as many as 50 cities, according to OVD-Info – an organisation that tracks protests in the country.

According to photographs shared on Tuesday by opposition politician Ilya Yashin, children are among those that have been snatched by officers.

The pictures show at least three children – no older than Primary School age – sitting in the back of what is reportedly a Moscow police van holding flowers and banners. One reporter said they went to lay flowers at the city’s Ukrainian embassy.

One girl is shown holding a sign that says ‘No War’ in Russian. Small Russian and Ukrainian flags have been painted around the words. To the right, the two flags are drawn followed by a small pink heart, to says ‘Russia plus Ukraine equals love’. 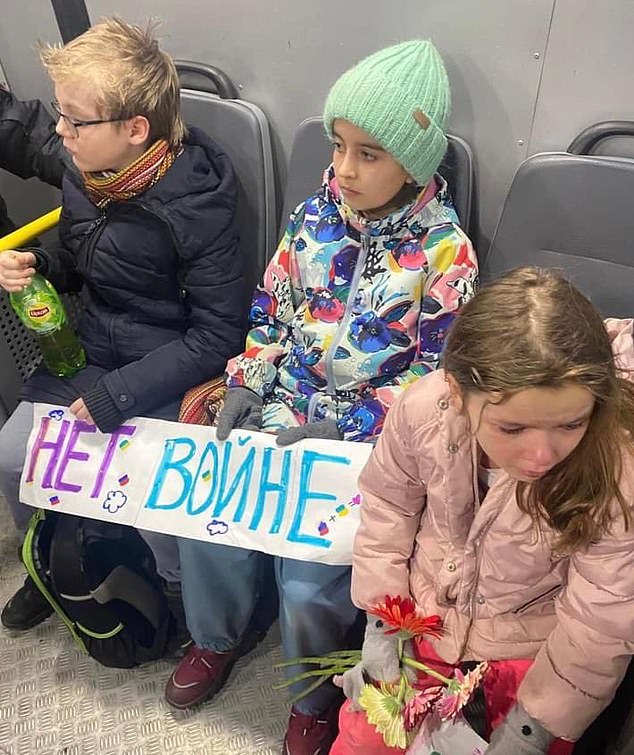 The girl is shown sitting on a chair in the back of a police van with a blank expression, with two children sat either side of her, who also both appear calm despite the circumstances.

A girl to her left is shown in a pink puffer jacket and mittens holding a bunch of flowers and another banner, while a boy to her left has his backpack at his feet.

Another photo shows the girl in the pink jacket standing up against metal bars that are keeping them inside the van. Her face appears red, as if she had been crying.

The other children can be seen behind her, as can what appear to be at least two Russian police officers dressed in black uniforms.

Officers in the same uniforms have been seen in Russian cities cracking down on protesters and bundling them into vans.

A third picture, again showing the girl in the pink jacket, suggest the children were taken to a police station. She can be seen sitting on a chair next to a desk, where a woman in police uniform and a mask is working on a computer.

The ‘no war’ banners they were holding are laid out on the desk behind the girl, as is one of her flowers. It appears to be dark outside.